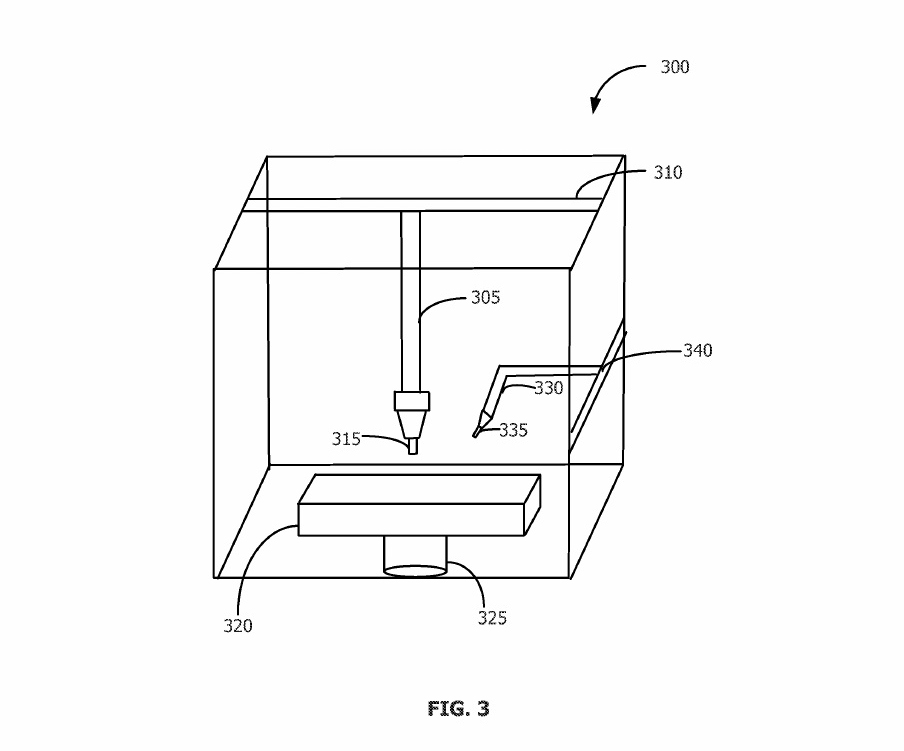 The application, published on December 3, 2015, is titled “Method And Apparatus For Three Dimensional Printing Of Colored Objects,” and, in it, a mechanism is described that relies on two printhaeds, one that deposits a printable material and another that colors that material either after its printed or during the printing process.  This second head could be in the form of an articulated or robotic arm, a rotatable nozzle, or just a parallel printhead and the coloring material is described as either ink or paint.

This solution would be just one of many working to bring full-color 3D printing to the world of FFF/FDM, which sees companies like Spectrom dying ink as it enters the extruder, RepRap.Me switching filaments within the extruder, and Chilean inventor Andres Bienzobas working on a variety of techniques for changing colors at the microscale.  Then, there’s always using a whole bunch of different colored filaments at the same time, like ORD Systems does with their RoVa 3D printer.

Of course, companies like Apple file patent applications all of the time – see the two I mentioned at the top, for instance.  We still haven’t seen a liquid metal 3D printer from the company… yet? If they were to release a full-color 3D printer, though, the world of desktop 3D printing would be given even more cred as Apple is famous for making new technologies user-friendly and accessible.  When they come out with a 3D printer, there’s a good chance that it will work well without a hitch.  If they happen to come out with some 3D scanning and AR tech, as some acquisitions and hires suggest, then they would surely dominate the mixed reality space as the 3MF Consortium means to do.

While we wait for Apple to get in on the 3D printing action, and for the CubeJet from 3D Systems to ever make its way to the public, hopefully some new full-color 3D printing technologies will see consumer-readiness sooner rather than later.