Full-color FDM/FFF 3D printing is desired by Makers and industrial companies alike.  While there exist a number of expensive options for 3D printing in a wide range of colors – including ColorJet Printing from 3D Systems, PolyJet printing from Stratasys, and, next year, HP will open up their MultiJet Fusion technology – fused filament fabrication, on the one hand, offers the ability to create the strongest objects of all 3D printing processes and, on the other hand, is a low-cost technology that anyone with a few hundred dollars can afford.  The ability to 3D print in full-color would drive more Makers and businesses to use FFF to 3D print end products with the almost the same vibrancy and strength as the mass-produced goods they’re used to.

As it stands, there are a few solutions currently being explored for 3D printing items in color on FFF machines.  The brute force approach sees multiple extruders implemented to feed a variety of different filament spools to these extruders to print in a number of colors limited by the number of extruders used by the machine. This increases the complexity of and power used by a 3D printer’s design, as well as the amount of space a printhead takes up in the print area. 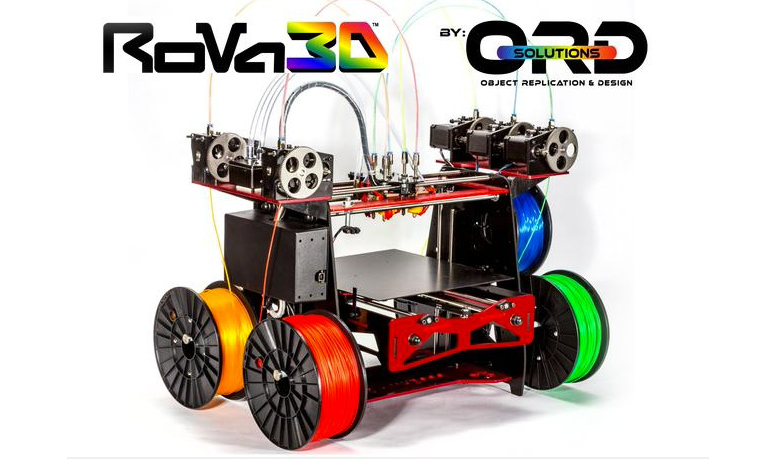 botObjects, since acquired by 3D Systems, proposed feeding multiple filaments to a single extruder, where they would be melted and blended into a desired output color.  This technique, never verified by the public, lead to a gradient effect, with color changes occurring only gradually over many layers. The Diamond Hotend from RepRap.me follows a similar approach to botObjects, except that, in switching between colors, the extruder deposits un-blended filament into a “waste tower”, so that only distinctly colored filament is printed.

Finally, Spectrom, started by two University of Wisconsin students, have their own solution, which they believe they can supply to any desktop FFF printer on the market.  Their extruder dyes a transparent filament as it is fed into the printer and, while they claim that their technology is capable of spot-coloring a print, rapidly shifting from one color to the next within the printing process, the exact method behind this process has yet to be revealed to the public, for patent reasons.

At 3D Print Week in New York, I had the pleasure of speaking with Andres Bienzobas, a Chilean entrepreneur and inventor who believes that he may have come up with his own technique for multicolored FFF 3D printing.  And, having filed patents for the technology, he is looking for 3D printer manufacturers to help him bring it to market more quickly.  But, more than offering a possibility for full-color 3D printing, one of Andres’s ideas could yield an entirely new 3D printing technology altogether.

Andres began in the world of 2D printing, where, having worked in the industry for some time, he invented an additive manufacturing process for speeding up multi-copy prints, making 2D printing cheaper and more versatile.  The technology, Solid Projection Printing, is capable of printing “2D images in 3D blocks that are formed by razor-thin square or honeycomb-shaped lining that allows the material to take shape.”  It’s a unique process that may be difficult to imagine without the following explanatory video.

With the technology, Andres was able to establish Honeycomb Graphics in Chile, procuring patents in four countries with others pending in many more elsewhere, including the US.  Since the company was founded in 2011, they were able to get their first fully operational SPP machine up and running by 2013.  Though ultimately destined for high-resolution printing, at present, the SPP production line works with polymers, compound materials, and wood.  Now, the team is expanding their technology for use with 3D printing.  Andres tells me that they hacked a Gigabot and some 3Doodlers to experiment with a 3D printing-specific version of their SPP technology.

Through his experimentation, Andres began envisioning several potential methods for full-color, FFF 3D printing.  In one version, the inventor imagines filament colored either before or after it enters the the printer’s extruder using an inkjet-style printhead. The other methods, for me personally, are a bit more difficult to wrap my head around, but Andres explains it in this way, “Another consists in extruding permanent electrochromic polymers and coloring them as they are being deposited by stimulating it with different voltages in order to create the desired color string. Another consists in a string of colored beads, another in a string of colored spheres or cylinders snapped into each other, and so forth.” Other embodiments would see different filaments sliced and assembled or industrial pellets assembled into a multicolor string of filament. 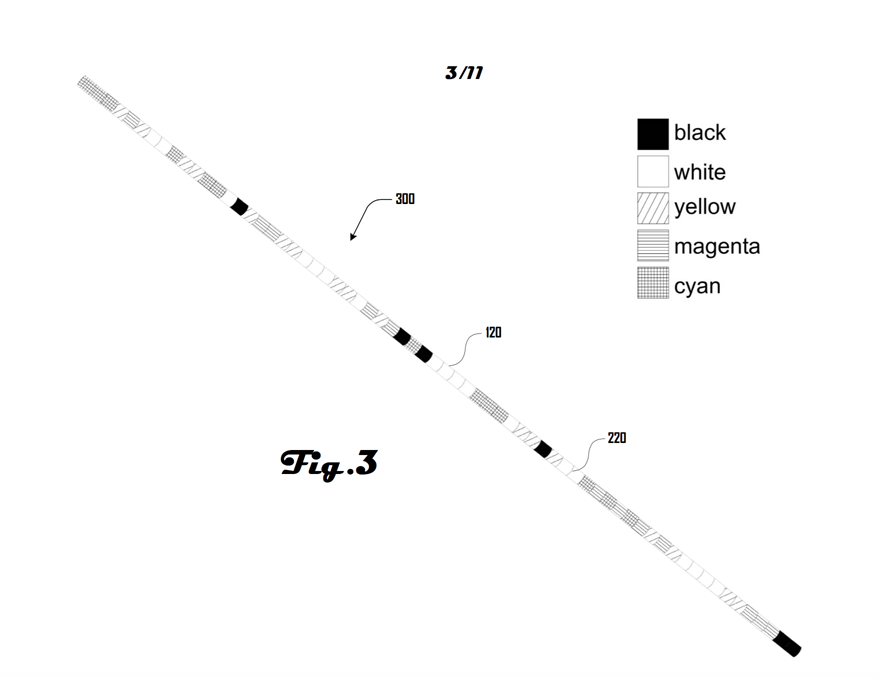 All of these methods, however, are tied together by the idea that a 3D printed object is colored only on its exterior using individual pixels, printing the interior monochromatically in order to save ink.  Similar to how an inkjet printer deposits different colored inks, these pixels blend together optically to reveal an image.  Andres explains, “The common thread to all of these embodiments is a string of different colored sections that, once deposited, produces an image on the surface of the object it’s creating by the coinciding of the colored ‘points’ or ‘pixels’ of each layer, in the same way that a specific arrangement of colored points or pixels create images on printed paper or on a screen.” Though Honeycomb Graphics is putting the finishing touches on its video, illustrating each of these technologies, the following video demonstrates the overall concept.

With the help of IP specialists Vann Pearce and Chris Higgins, from Orrick, Herrington & Sutcliffe LLP, Andres was able to file a patent application for this new form of 3D printing.  While patent applications are normally pretty boring to sift through, the application from Andres and his IP team is almost a work of modern art, in terms of its drawings, and describes the above methods for achieving full-color 3D printing (reference numbers removed for easier reading): 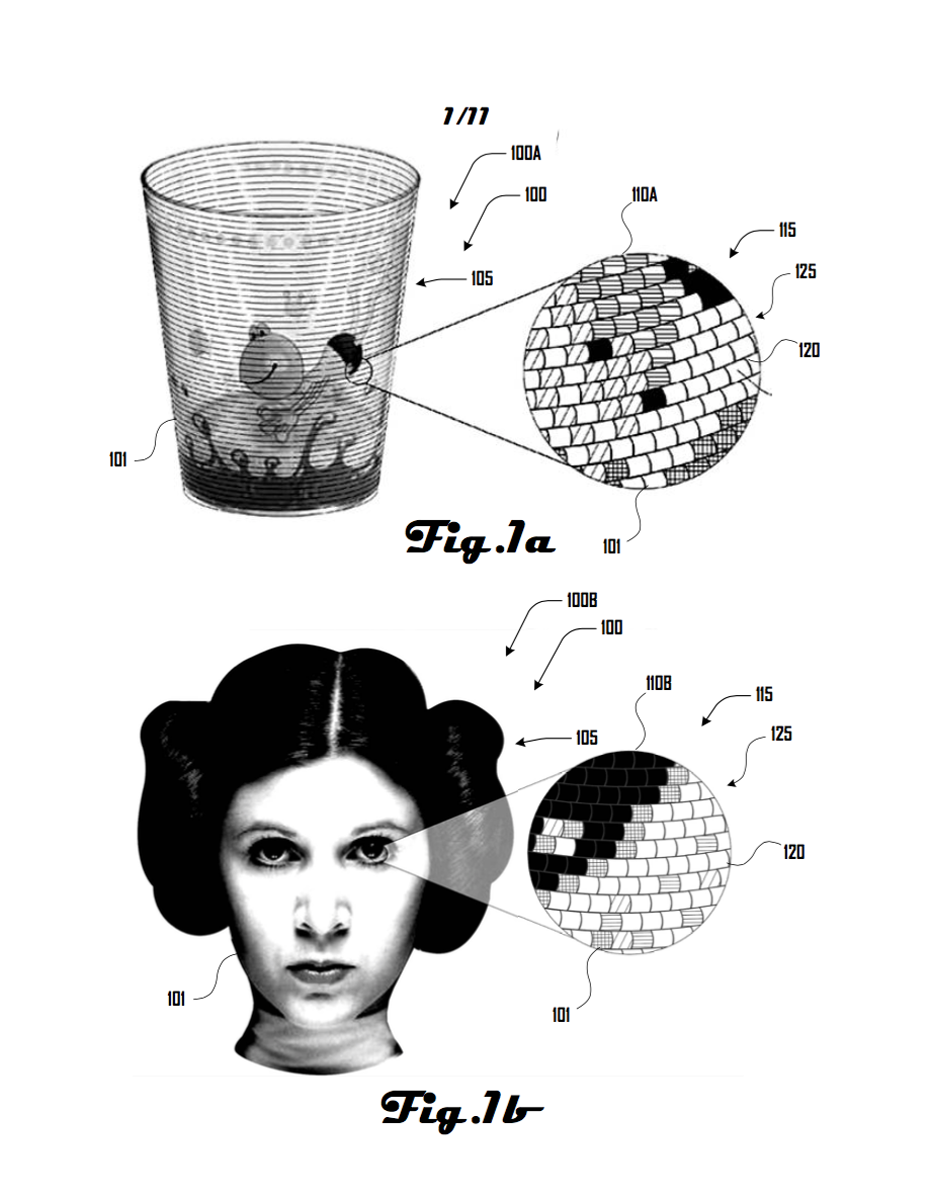 Fig 1a illustrates an example of a printed object (a cup) that comprises an image on an outer surface of the object 100A. As illustrated in zoomed view 110A, the image is defined by a pixel array that comprises a plurality of colored pixels that are disposed in rows. In various embodiments, the rows can comprise parallel portions or segments of a line (e.g., as shown in Fig. 3 and described in detail herein).

Fig. 1b illustrates another example of a printed object (a doll’s head) that comprises an image on an outer surface of the object. As illustrated in zoomed view 110B, the image is defined by a pixel array that comprises a plurality of colored pixels that are disposed in rows 125. In various embodiments, the rows can comprise parallel portions or segments of a line (e.g., shown in Fig. 3 and described in detail herein).

A recently successful Kickstarter demonstrated an approach that may, at first, seem to bear some small resemblance to Andres’s patent.  The Palette sees up to four spools of filament fed into any given FFF 3D printer and, in the process, cuts them up to mix colors.  When I asked Andres about the difference between this technique and what he proposes, Andres tells me that it’s all about scale and range:

It’s totally different from mine. What they do is put together long sections of filaments of different colors, so the resulting print is the same as a printer with 2, 3 or 4 extruders, but better. The resulting print will have entire sections of one flat color, next to or on top of another, but it does not mix very small segments of colors in order to create the illusion of other colors by combination, like the CMYK color process, or other coloring systems.

If these guys were doing the same as they describe, but, instead of long pieces of each color, they could put together tiny pieces of each color, of around 100 to 200 microns each, then they would be producing a string of colors similar to that described in my patent. They would also need a different software.

What is most interesting to me is the last embodiment that Andres described to me, in which colored beads are snapped together as they’re printed.  This is, essentially, a form of voxel 3D printing, which has tremendous potential for the industry.  Voxels, as distinct 3D objects in themselves, might increase the speed of FDM-style 3D printing and, when these units are imbued with certain properties or functions, might yield to more advanced printed objects overall.  As 3D printing pioneer Hod Lipson is exploring with his current research, assembling components, such as sensors or resistors, into an object would really yield a form of micro-manufacturing moving 3D printing away from a method for creating individual parts to creating entire, functional objects.  Andres’ patent even goes into using unique materials, such as gold and chrome, “For example, metals such as chrome, silver, gold, and the like can be present in a pixel.  Accordingly, it should be clear that any example embodiments described herein are not limiting on the many alternative embodiments that are within the scope and spirit of the present invention.” 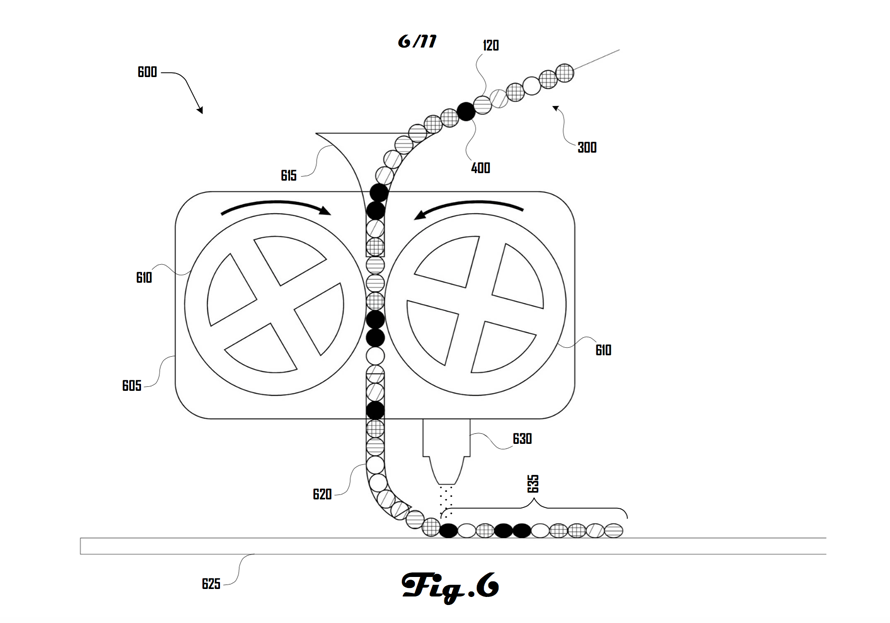 Andres’s technology is not only in patent form, however.  He and his team are in the process of completing a medium-scale prototype capable of printing a 1.75 diameter string.  But, to bring the tech to market, Andres is seeking willing partners to venture into the unknown and bring back a wholly new form of 3D printing technology.  He believes that it is entirely doable and he has already begun talks with 3D printer manufacturers interested in launching his system. He tells me, “Regarding the cost of development, in my opinion this technology is much simpler and cheaper to develop than SPP, which took us about 18 months to develop. We recently had preliminary talks with a well-known, US FFF printer manufacturer and, according to them, they could have this feature fully operational in their printers in 5 to 6 months time, confirming my belief that this is not a very difficult problem to solve, nor from the hardware nor from the software point of view.”

With or without them, the medium-scale prototype should be complete within three months, at which point Honeycomb Graphics will work to shrink the technology into a small-scale extruder that could potentially be fitted onto the printers of one of his partners.  Having already conceived of and built a revolutionary AM 2D printing technology, it is completely plausible that he can bring this technique to life as well.  And if you’d like to join him for the ride, possibly aiding in the invention of a new technology and taking low-cost 3D printing by storm, you can contact Andres as [email protected].