On April 1st, RepRap.me launched a new Kickstarter campaign for their Diamond Hotend for 3D printers, and were 100% funded in two days. What makes this hotend so appealing? The Diamond Hotend allows users to feed 3 different colors through one nozzle at the same time. The project is up until May 1st, so you still have plenty of time to check it out and purchase the latest in color 3D printing technology.

RepRap.me, based in Denmark, suggests that their diamond-shaped extruder not only allows you to easily time out when to change colors, but it also allows you to blend red, blue and green filament to produce another color, a lot easier than the cutting and fusing different colored filaments together before printing.  If that’s true, it may be somewhat like the Spectrom full-color extruder or the technique used by the botObjects 3D printer, both of which have raised questions about how the colors are blended and how a printer can perform spot coloring.

In the video above, RepRap.me explain how they address these issues, including a “waste tower” that collects purged filament during a print job so that clear shifts in color can be achieved.  The video also demonstrates the hotend being used to blend an orange color from green and red filaments.  If true, the Diamond Hotend may be the first true method for achieving full-color FDM prints.

The developers also say that that the new hotend is capable of printing a variety of 1.75mm filaments, including PLA, ABS, HIPS, FLEX, and PETG. RepRap.me claims that the single nozzle is easy to calibrate and is produces less oozing and filament waster. The nozzle is super compact to ensure rapid nozzle heat up and according to developers, a more precise print. 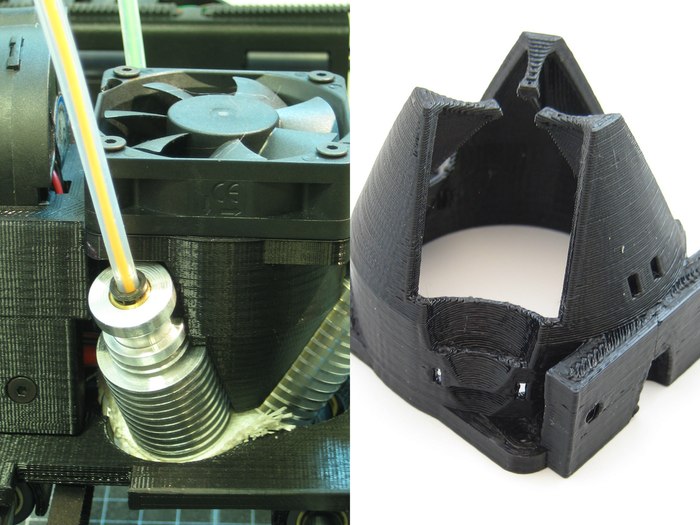 RepRap.me’s Diamond Hotend and nozzle are being sold on their Kickstarter individually and in DIY kits. The hotend should work on most 3D printers, but for all you gung-ho DIYers, just make sure you purchase a RUMBA motherboard to sync up your printer with the hotend’s triple extruders before you get started. 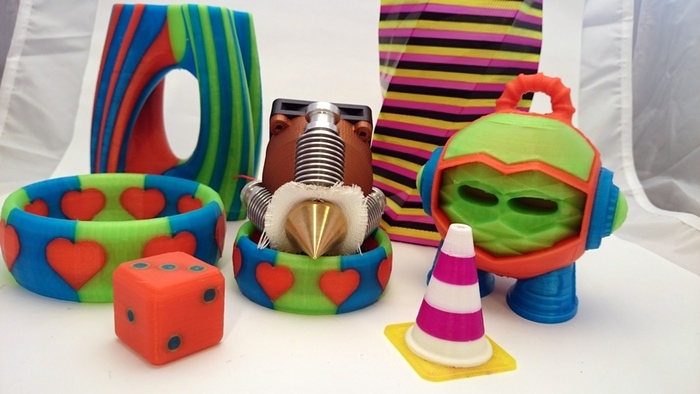 As of this moment, RepRap.me is estimating the delivery of the Diamond Hotend, now funded at 220%, by June 2015 and will ship anywhere in the world.  With our fingers crossed, we hope that this is new technology will lead the revolution for true multi-color FDM 3D printing.