At CES last week, a start-up started up by a couple of University of Wisconsin students wowed attendees with their fascinating, potentially breakthrough, 3D printing device.  Spectrom is in the process of launching a product that, when set up on an ordinary FFF desktop 3D printer, can cause it to yield full-color prints.  Without multiple print nozzles and rolls of filament.  No gypsum and binder.  Users can install the Spectrom device onto their printer, load a roll of transparent filament, and, thanks to great code and dye, a desktop printer can begin printing in full-color. 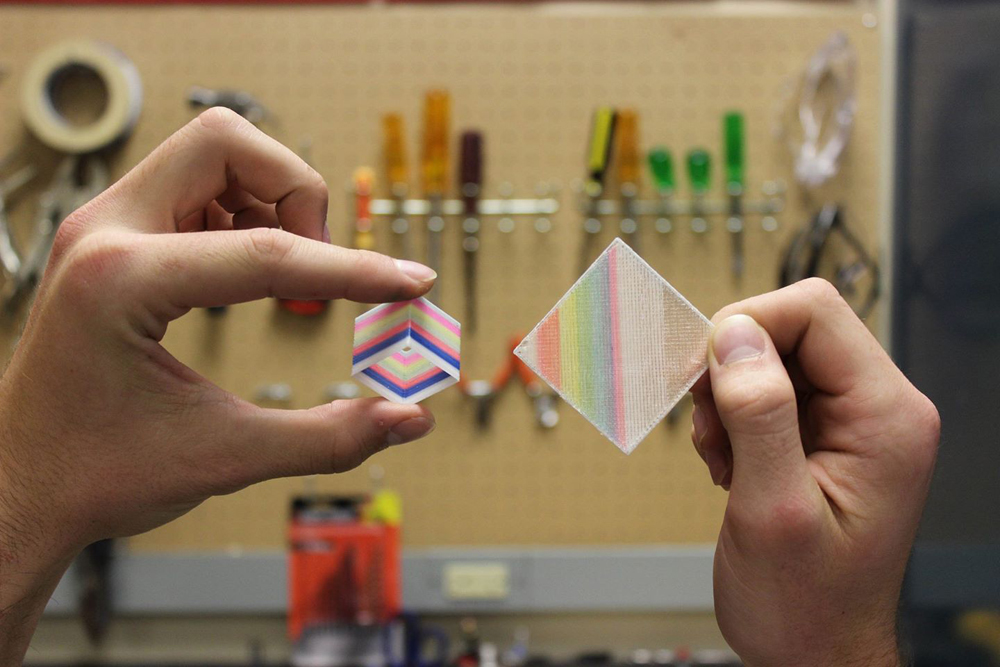 When we first wrote about Spectrom, last year, the start-up was compared to botObjects, the UK printer manufacturer that had developed a method for feeding five rolls of distinctly colored CMYKW filament into a single print head to produce multi-colored prints.  One of the issues that the 3D printing community had with botObjects was that their process was not capable of spot coloring, discretely shifting from one color to the next.  Their prints consistently showed a gradient color change from one color to the next. An interesting effect, but not quite full-color. 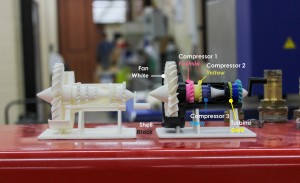 To distinguish the Spectrom process from botObjects, I turned to the start-up’s co-founder Cédric Kovacs-Johnson.  Acknowledging the possible comparison to botObjects-esque tech, he clarifies, “So we love seeing all of the developments in color 3D printing, however we don’t think anyone has unlocked true ‘full-color’ yet and that’s what we’re going after. We internally define full-color as fulfilling three criteria:

He says that the Spectrom device is capable of changing colors, all without purging, so that a printer outfitted with the Spectrom to print a wide range of colors in a single layer, without stopping. Cédric elaborates, “Unlike botObjects, we’re using a dye-based system which allows for more precise color mixing and consistent realization. There is a proprietary facet that allows for the spot coloring on the part which is sadly under wraps for now.” Though he wasn’t able to go into details, he did say that live demonstrations were given at CES to prove to onlookers Spectrom’s ability to perform spot-coloring.  The software, however, still needs further refinement.

Cédric explains that they’re currently using a version of Cura that allows users to individually color layers based on an RGB palette.  He tells me, “We plan to expand upon this work by creating a custom slicing engine capable of recognizing multiple colors in a single layer and generating optimal toolpaths for that. That slicer will accompany a very simple to use interface that gives users a virtual paintbrush to ‘paint’ or apply textures to an STL. We will also begin work to incorporate color .OBJ files into the workflow.”

With a completed slicing engine, the company will begin working with 3D printer manufacturers to incorporate Spectrom into their devices.  Though ROBO3D  has been a Spectrom beta tester, demonstrating their process at CES last week, the company will not necessarily be integrating Spectrom into future machines.  Cédric did say that ROBO3D proved to be a great partner for CES, “We chose to work with them because their team was passionate about color and they built an extremely affordable machine that allowed for modification – essential to us at this early stage.” Regardless of which manufacturers they end up going with, the Spectrom will be compatible with a number of other desktop 3D printers on the market.

Before the Spectrom extruder is available for purchase, the start-up will be launching an “Order From Spectrom” service in about a month and a half.  Using this service, customers will be able to download their upcoming software, color their .stl files, and have it printed by Spectrom for what the company considers a reasonable price.

If the company really can deliver on full-color printing for low-cost machines, they will certainly become big quite fast. And, soon, I’d expect a call from 3D Systems to be incorporated into the broader 3DS family. Until then, we can enjoy their sleek marketing, including a promo video with the best soundtrack I’ve heard yet. In the video, you’ll see Spectrom performing a full color print of the famous Las Vegas sign.

To me, it looks as though the colors are still changing one layer at a time, but Cédric tells me that the company will, in the near future, give an in-depth explanation of how their system works. Otherwise, we might trust their first place win at the Collegiate Inventors Competition at the USPTO in Washington D.C.