Now, before anyone who’s still wrapping their head around 3D printing goes and tells everyone about this new full-colour 3D printer adapter and before anyone who’s overly familiar with the technology goes and yells at us for covering another sketchy botObjects-esque marketing gimmick, just relax for a minute. Two students from the University of Wisconsin at Madison have developed a device that they say allows any FFF/FDM 3D printer to print in “full colour.” 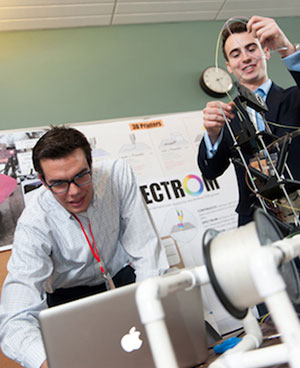 Rather than relying on multiple printheads with different spools of pre-dyed filament, Spectrom is a device that can be attached directly to any FFF/FDM 3D printer to dye clear filament to match a desired colour.  Designed by chemical engineering students Cédric Kovacs-Johnson and Charles Haider, the project won both the $10,000 Schoofs Prize for Creativity and the $2,500 Tong Prototype Prize at Madison’s 20th annual Innovation Days.

Kovacs-Johnson and Haider believe that the device could cause a radical change in desktop 3D printing. Kovacs-Johnson says, “The next great technology of our generation that will see the change to colour is 3D printing,” adding that Spectrom could be used for creating prosthetics. “With 3D printing you have the ability to scan someone’s face and build an exact face profile. You can then print off, using Spectrom, a nose that would match their skin exactly.”  Haider adds that “One of the things when you’re doing prototyping is that you’re looking to highlight specific, complex features. Being able to bring clarity to the parts that are unique—while in meetings with clients and upper-level management—that’s where we have an advantage.” 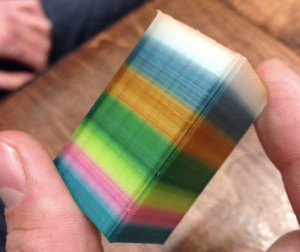 Now that we’ve got the hype out of the way, does Spectrom actually enable full-colour 3D printing? It’s difficult to determine at this point, as the only samples we’ve seen from the duo are rainbow coloured, gradient prints.These prints hint at limits to the device’s full-colour capability. Fabbaloo suggests that the abrupt shifts in colour from one layer to the next indicate that Spectrom doesn’t allow for a printer to simply shift colours on the fly, but must be modified layer by layer:

… perhaps it could tediously switch colours in mid-print constantly to produce, say, a simple colour gradient within a single layer, but we suspect the printer would spend a significant amount of time purging old colour before the new color reliably emerges from the extruder. For each differently-coloured volume. Ouch!

The device does point in the direction of developments in colour FFF/FDM technology. For instance, Spectrom leads to a bit of flexibility in your options for coloured filament – making it possible to choose more specific filament hues for a given project. Rather than buy multiple kilogram spools of filament, you’d only need to buy one clear spool that is dyed during the printing process.

As for the purging time necessary to shift colours, as stated by Fabbaloo, it may be possible to use two or more Spectroms and multiple printheads to expand the colour printing ability of future FFF/FDM printers.  I can imagine a specially designed machine that retracts one print head, which purges unwanted coloured filament into a temporarily engaged waste receiver while another printhead prints with a new colour. Current FFF machines may not be modded to do such things, but the point is that dying filament during a print may open up new possibilities down the line.

For that reason, I’m happy to hear that the two chemical engineers are considering the launch of a Kickstarter or working with other, larger companies to develop Spectrom further. As an optimist, I prefer to see Spectrom as opening up further possibilities, rather than as a project that takes advantage of Gartner’s Hype Cycle to make some quick cash. Then again, I’ve been wrong in the past!  For instance, I watched Lost all the way to the end, naively believing that there’d be a pay off.