3D Printing: Bring on the Trough of Disillusionment — Please!!

Last week 3D Printing Industry published a post from Graham Tromans that focused on some serious concerns that Graham has about safety issues, specifically in terms on users of entry-level machines and materials qualification.

These are such valid points that they do need to be stressed over and over again — and the vendors urged to stop saying (or implying) that anyone can 3D print anything — which is why I am not going to apologise for highlighting the problem again here and referring you back to Graham’s post.

A contributing problem to Graham’s concerns is the hype that has been created around 3D printing as it gains momentum within mainstream circles — some mainstream press channels have been particularly guilty of this. The hype cycle itself in relation to this technology has also been much vaunted in the last 12 months and particularly in the last couple of months or so, with industry insiders seemingly fighting a losing battle against a mainstream media rush that tends to infuse a few grains of fact with future predictions and out and out delusion.  Indeed, I actually recoiled when I saw that the Sun Newspaper (a red top in the UK) reported so many inaccuracies in its first coverage of 3D printing last week. This publication is not alone. 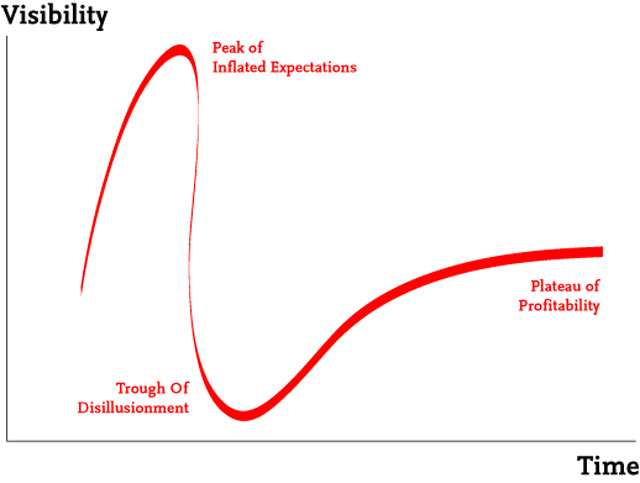 According to many, 3D printing is at the peak of this hype cycle — developed by Gartner — and is on the verge of plummeting into the trough of disillusionment. I really, really hope so. To be honest, this can’t come quickly enough for me! I find it much easier to fight people’s negativity with the positive capabilities of 3D printing (there are many) than to constantly burst the bubble of people’s hugely inflated expectations of 3D printing.

It is all about keeping it real right now, with genuine — and pretty amazing — applications of 3D printing, which, as Graham mentioned, come from understanding what 3D printing CAN and CANNOT do. It is also important to appreciate that we are only in the early stages of this 3D printing journey and that the technology promises much greater things in the future as R&D continues. Real applications do demonstrate that the different 3D printing processes bring original products into being — many of them previously believed impossible. But as of today — 3D printers simply canNOT print anything you can imagine. I shudder every time I see or hear those words — because this is exactly the turn of phrase that leads people to believe that 3D printing is something that it is not.

3D printing can, and is, make a startling difference to the world we live in now — visible on the pages of this site and others. And, I have no doubt that it will have an even greater impact in the future, however, for now, it is important that we don’t oversell it or the trough of disillusionment will be harder to vacate than it otherwise needs to be.