A Day at the Engineering Design Show

On Wednesday I was a visitor at the Engineering Design Show at the Ricoh Arena in Coventry. This was an inaugural two-day show organised by Findlay Media, publishers of Eureka magazine. Unsurprisingly the event was targeted at Design Engineers and brought together a rich mix of suppliers and service providers pertinent to this discipline and there were also a series of conferences and workshops running across the two days.

For me personally it was an opportunity to take one day out to meet up with a few different people that would otherwise blank out three days in my diary. Trade shows can be really good for that.

The show was smaller than I was expecting, an assumption probably shaped by other recent events where I have been in attendance, but it was a lively and positive environment and with the M6 being relatively kind to me in both directions, for a change, it was definitely worthwhile.

The only disappointment for me was that the 3D printing industry was not that well represented on the show floor or in the presentations. Now I fully understand that design engineering activities are diverse and that 3D printing is not the be-all and the end-all, however, it does get overlooked and somewhat taken for granted in this respect I feel. Concept development and functional prototyping are the very cornerstone applications of the technology, and while that’s not a sexy message for the consumer market, it should really have a much stronger presence at a show dedicated to design engineers.

It wasn’t too much of a surprise to see that the 3D printing companies that were there were inundated with visitors.

So it wasn’t too much of a surprise to see that the 3D printing companies that were there were inundated with visitors. I tried to stop by the OPS stand numerous times. Objet Printer Solutions is a UK reseller for Objet and had an Objet30 Pro on the stand with shelves and shelves of recognisable printed parts that were getting lots of attention. They were constantly surrounded by people and, not knowing these guys personally, I left them too it confident they would rather be talking to potential customers than me; and knowing I’ll get any Objet gossip at the 3D Print Show in London next week.

I did manage to catch up with Stephen Crownshaw of Renishaw, the company that acquired MTT and the SLM additive technology for metals about 15 months ago. Renishaw is an inspirational UK brand for engineering and quality in my opinion — before the MTT acquisition they were working with the tech as a user and had great understanding of how and why it can be utilised for development and manufacturing within the company. Since the acquisition this insight and knowledge has been put to great use with some extensive R&D continuing to go on. I am expecting great things very soon.

The only other supplier of 3D printing products on site at the Ricoh was Laser Lines of course. They are everywhere I go (and a lot of other places besides), which I mentioned to Dave Price yesterday, who asked why I was surprised! Point taken!!

Laser Lines were there in force, with a Dimension and a Mojo on display. Plenty of interest, particularly in the Mojo — the more I see and hear the more I think this 3D printer, or something very close to it, is going to be a contributing factor to the tipping point for the technology, even despite the fact that it is labelled, properly, as a professional machine — none of this ‘prosumer’ nonsense. But if the price and the size of the machine itself were to come down and the size of the build chamber and the range of materials were to go up, the concept of this 3D printer — the closest thing I have seen to plug-n-play — would be a real contender for consumers. Just a thought.

Talking to the guys, the Stratasys – Objet merger is still ongoing with no final resolution. No real news on when that will all be finalised, which although not stated outright, I kind of got the feeling that they are all a little bit in limbo. But as Dave said, until we get the nod “it’s business as usual.”

I did get some brilliant insight on a couple of applications though. I was chatting — in person for a change — with Kevin Quigley (@Quigdes) and Richard Horne (@RichRap) for a while, just by the Laser Lines stand, and obviously talk turned to consumer uptake of 3D printing — what, when, why, where and how etc — and Phil Craxford of Laser Lines contributed a gem of information. It turns out that more than one Dimension 3D printer (the size of a large fridge-freezer) has been delivered to people’s homes — one installed in a conservatory and one in a living room. Amazing!! After telling him off for not sharing this with me ever before, I am drilling down to get more info on this for future posts. 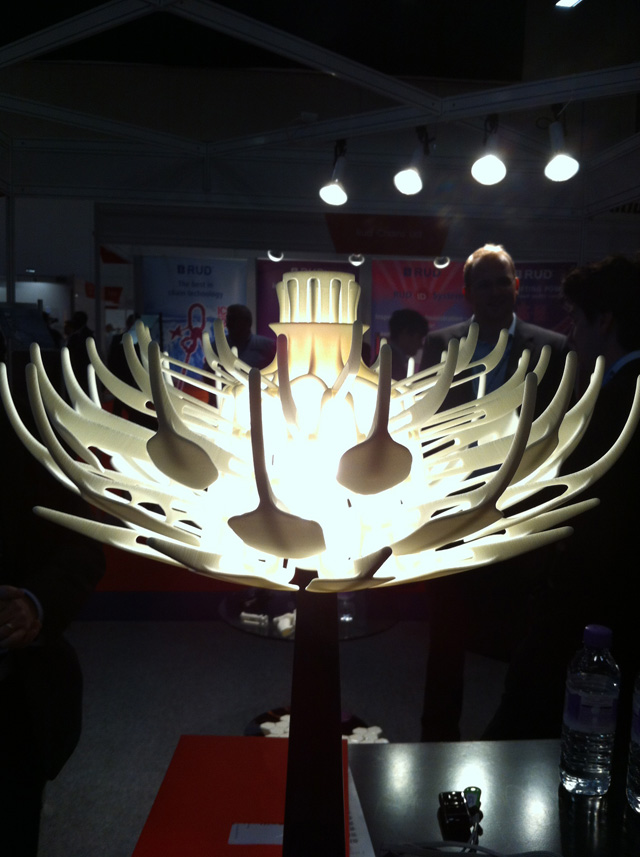 The Engineering Design show also hosted a fair few 3D printing service providers — I stopped by to see Ogle Models + Prototypes, Prototype Projects and Materialise who all reported strong business and a good show so far. Unfortunately CRDM and Laser Prototypes, who were also exhibiting, were inundated as I passed by, which kind of speaks for itself.

So, to round up this post I am going to point you to perhaps the best and most original 3D printed part that I saw on the show floor. It is a snow-boarding helmet — designed by Curventa, built on an SLA machine by Ogle Models and metal plated by 3DDC. Notice the finish is so good you have perfect view of the top of the exhibition stand! All I can say is — wow! A fantastic example of what high quality 3D printing can do, and a great collaborative project. 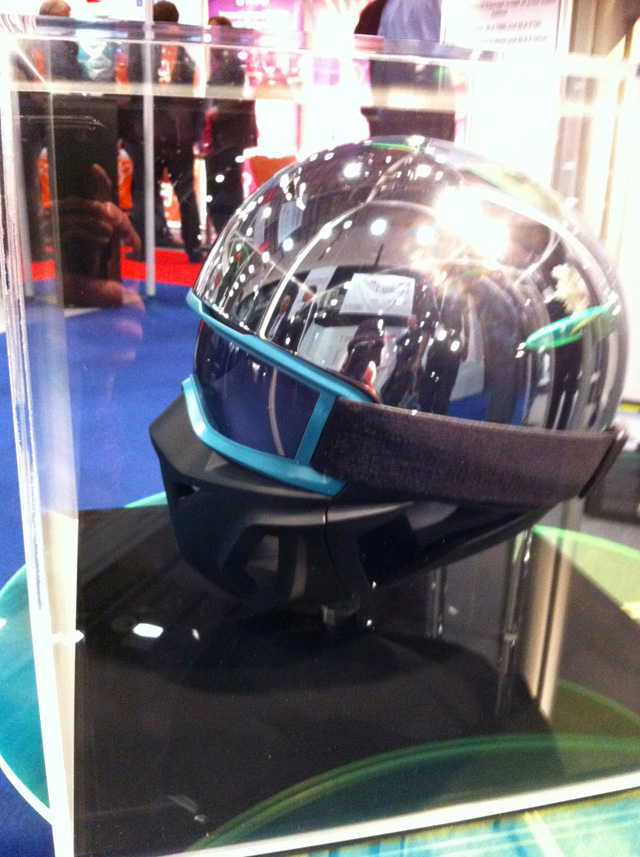 Let us know what you think of it.