US scientists and a Danish entrepreneur have been working on reconstructing sea life from ancient times, and we’re not talking recent history but 390 million years ago. Using a combination of computer animation, CT scanning and 3D printing technology, the team has created a life-like model of an ancient Mollusk in the search of answers regarding its place in evolution.

Until now, only a few partial fossils of the creature, known as a multiplacophoran, existed and the new model allows palaeontologists to study the physiology of the specimen in greater detail. The team, led by the palaeontologist Jakob Vinther from the University of Texas, began this process of recreation by building a three dimensional model of the most complete fossil available. With the help of the latest digital software the team rearranged the fossil pieces that had been fragmented and drifted apart as a result of the ageing process.

Once the results were complete enough, Vinther turned to Danish model maker Esben Horn, who owns the 3D printing company 10 Tons in Copenhagen. Horn created the first physical model using 3D printers together with clay, resin and silicon as building materials. To create the final life-life construction, the pair used acrylic paints to airbrush the final details mimicking the modern Chitons that are distant relatives of the ancient multiplacophorans.

The final model shows how the mollusk’s interlocking plates that made up its turtle-like protective shell were arranged in two parallel rows, yielding a more heavy armour than their contemporaries, both of which live in shallow predator-friendly waters. 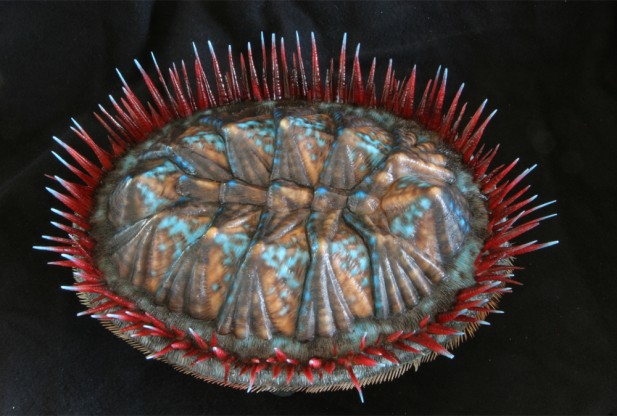