On Friday, I wrote an article about a fraudulent 3D printer campaign proposing to sell the NEA 3D printer series.  The amalgam of stolen assets and text seemed authentic at first glance, but, due to the vigilance of the crowdfunding community, the campaign was uncovered as fake, reported to Kickstarter and the authentic NEA 3D, and ultimately taken down.  Today, I was alerted to yet another imposter campaign on the crowdfunding site, with indications that the same scammer is still at it. 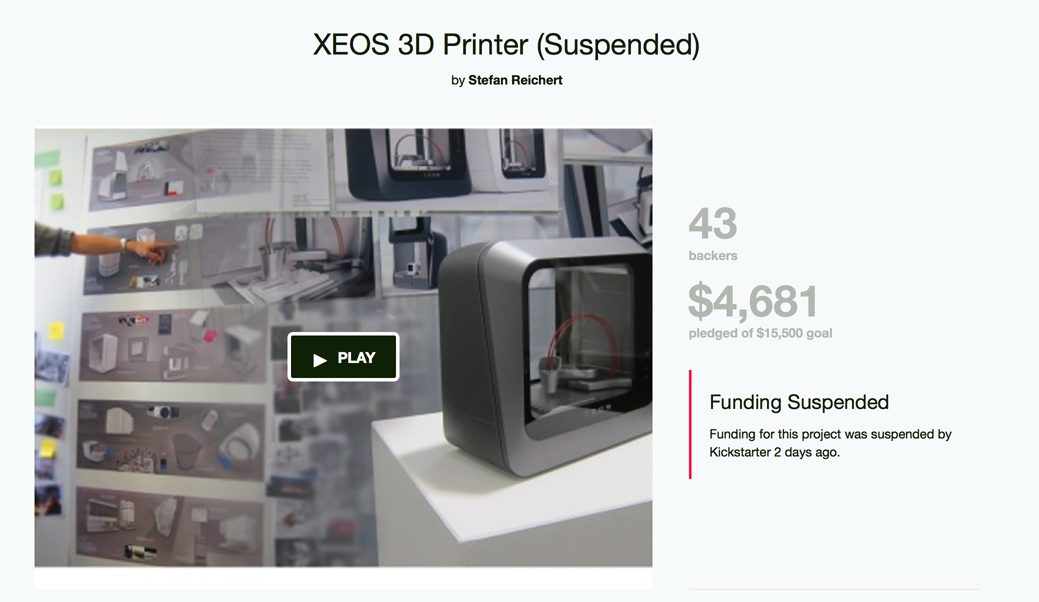 The XEOS 3D printer is only a concept and it’s an old one at that.  We covered the XEOS concept more than two years ago, when, then University of Wuppertal student, Stefan Reichert designed it. Reichert adamantly states that the campaign is not his, telling me, “No, this was not me and this person was not allowed to use any of my pictures, my video or my name. I sold the rights to use the design, the CAD and everything that is part of the project to an European company a couple years ago. I don’t know if there are any plans on their side to execute it in the future or not.”

Perhaps it was because of the printer’s status as a more than two-year-old concept that caused the scammer to use it for their fake campaign; it might be less likely to draw the attention of an actual company, as was the case with the NEA 3D project.  In the case, too, the Kickstarter community was quick to call out the project’s creator as a phony: 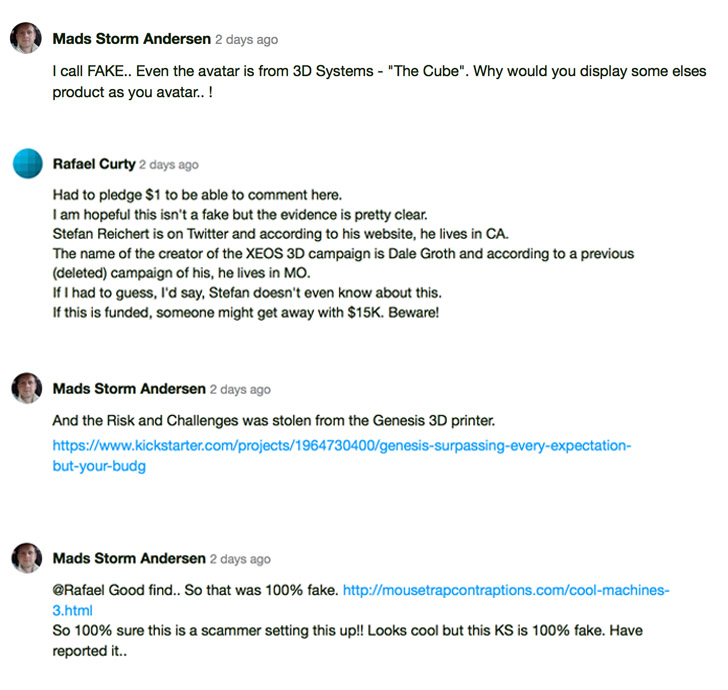 The campaign was eventually cancelled two days ago, but Mads continued to look into the subject, finding that one of the verifiers of the fake XEOS had also verified the fake NEA 3D campaign.

If, according to the community, Dale Groth (no relation to Dave Grohl), was able to launch three different fake campaigns, how was he able to pass Kickstarter’s verification process? On its FAQ page, Kickstarter describes its review process, saying, “Our Launch Now feature uses an algorithm incorporating thousands of data points to check whether a project is ready to launch — things like the project’s description, rewards, funding goal, and whether the creator has previously launched a project.”  If the project passes through this process, which involves validating your identity with a bank account and the last four digits of your social, it can go live. 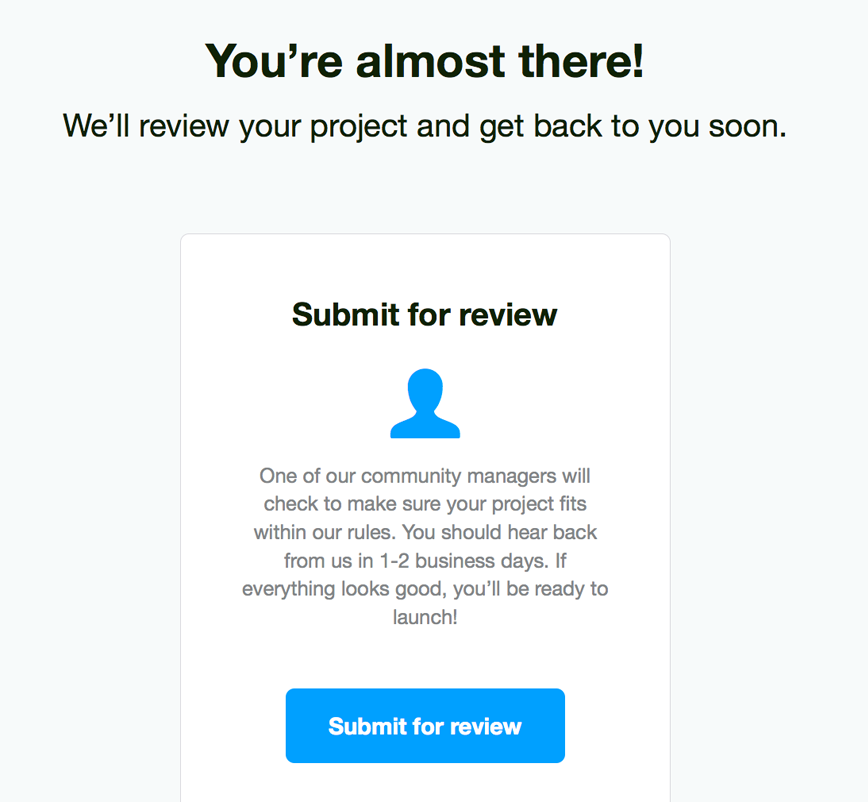 If the project does not pass this process, it goes onto manual review. Reviewing is something that the crowdfunding site cares deeply about, according to the FAQ: “We take our review process more seriously than a lot of other sites because we have to. It’s a big deal for a project to be taken down after it’s launched – much bigger than taking down a YouTube video.”  With a dedicated review team, the manual review process takes about one to three business days.  In total, about 80% of campaigns are verified.

In the case that the campaign is suspended, as occurred with XEOS 3D, “[f]unding for the project stops and all pledges are canceled. Both the project’s creator and backers are notified via email” and “[o]nce a project has been suspended it cannot be undone.” In the case of XEOS, it took about a day for the campaign to be suspended and, with NEA 3D, it occurred within the same day, with the Kickstarter community reporting violations to Kickstarter’s Integrity Team (instructions on how to do so are here) and NEA reporting an intellectual property violation with this form. 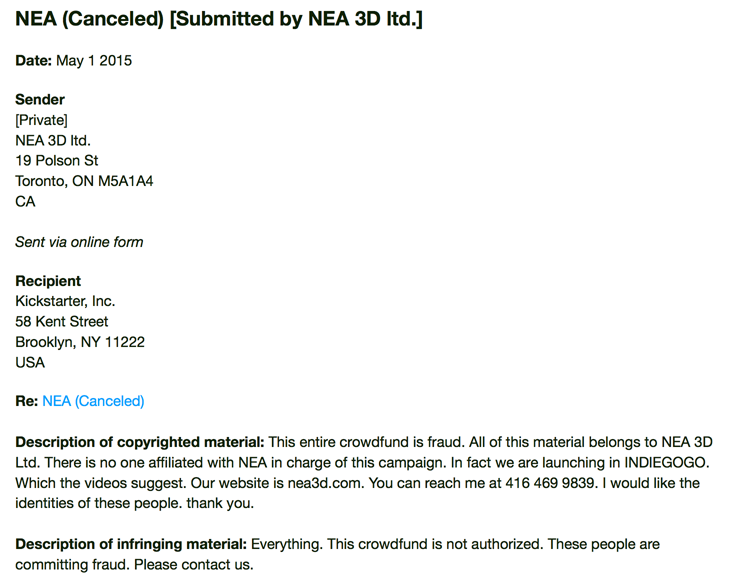 When I wrote into Kickstarter about the scams, I received a response from a member of the communications team, who told me that backers aren’t charged until the funding period ends:

Hi Michael: I’m on Kickstarter’s communications team and received your query. Thanks for reaching out and I’m sorry for the slow reply. It’s our policy to not comment on actions taken against individual projects. I saw your piece and wanted to point out one thing that is fairly unique to Kickstarter: no backers are charged until the funding period ends, and then only if the project goal has been reached. If a project is canceled before the funding period ends, no money ever changes hands, even if the project has met its goal. This is an important protection for backers.

So, even if the fake NEA or XEOS campaigns had passed their goals in the short amount of time seen with the TIKO 3D printer or the 3Doodler pen, no one would be charged until the campaign ended, a range of between 1 and 60 days. As to whether or not their algorithm would catch a project with a one-day duration period, the community member writes:

The Launch Now algorithm looks at projects and decides whether they are OK to launch immediately or whether they need a human to check them out. As we explained in this post, about 40% of projects get a green light, and 60% need a manual review. (Some creators whose projects get a green light request a manual review anyway.) I have to say I’ve never seen a project with a funding period of 1-2 days! I imagine it would be hard to get any traction that way.

Nevertheless, there are scams that are able to take advantage of the crowdfunding community.  The most notable to our readers is Pirate3D, which straddles the line between failing business and actual fraud. Kickscammed, a site that allows users to report fraudulent crowdfunding campaigns, records “over $2 Million reported in crowdfunding scams.” As an investment platform, crowdfunding may be susceptible to the same sorts of fraud that exist on the pink sheets. With microcap stocks, investors may feel comfortable contributing a small amount of money, in order to reap big rewards, but fraudulent stocks can make off with hundreds of thousands of dollars. In the case of crowdfunding, backers are receiving rewards instead of financial gain, but Justin Mitchell, founder of the site, tells CNBC, “A lot of backers see that they lost $10 and don’t care, but don’t really see that the creator ran off with $250,000. I wanted to basically show Kickstarter that if this goes left untouched, their site will become a free-for-all for scammers.”

One such fraud related to our industry is the LIX 3D printing pen, which succeeded on Kickstarter, but failed to deliver the product to its backers, some of which are still holding out hope for their pens and others that have called them out as scammers. One backer writes on Kickscammed, “No rewards to be delivered 6+ months after the scheduled dates, prototype hardly work, nearly no communication – none since mid March, late and useless replies to emails, …Worse of all, KickStarter is sitting back and enjoying their share (5%) of the scam !”

The room for fraud is still there, obviously, and, at least on 3DPI, we will attempt to address these scams before and as they launch, rather than afterwards.  As a promising method for raising money for independent projects, I’d like to think that Kickstarter, and other such sites, can figure out a way to deal with the issue of fraud early on, before it becomes as flawed as the stock market.  How will crowdfunding sites deal with companies that have already succeeded on the crowdfunding site, without reimbursing their backers?

I’m in the process of launching a fake campaign as I write this, to see if I’m up to snuff.  So far, my identity has been verified, but I’ve been put up for manual review. Had I put in more detailed information, it’s possible that my campaign could have gone straight to Launch Now?  Maybe next time…