Do you want multiple colors in your 3D prints? Do you also want to see a perfect Kickstarter campaign? Check out The Palette: 3D Printing Evolved, and you might just get both in one shot. Especially if they hit their goal, which they will certainly have done by the time you read this (especially since the pledged amount has grown by $3.000 since I started reading it).

The Palette basically lets users 3D print with up to four color filaments at the same time through a single nozzle. It cuts, calculates, and creates a single custom strand made of multiple filaments. Users can even combine filaments of different materials with different functionalities, such as conductive or composites, into a single print. 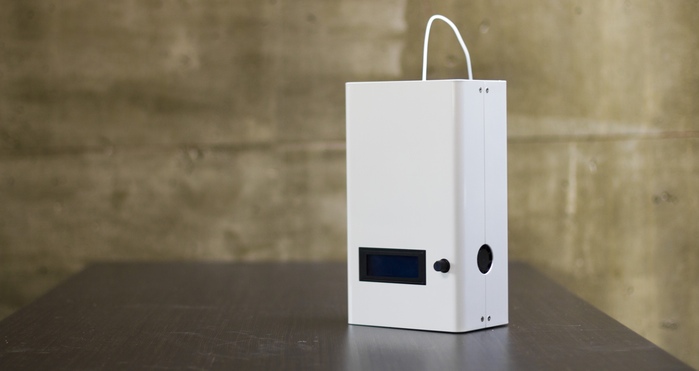 Mosaic, the company behind it, has a materials engineer (Mitch Debora), a mechanical engineer (Derek Vogt) and a precision machinist and multi-axis CNC programmer (Chris Nooyen) on board. They are supported by marketing and communication expert Heather Evans and by entrepreneurial expert Chris Labelle, whose magic touch clearly shows in the campaign.  Altogether, the result is a multicolor, multimaterial 3D printing wonder-device.

Users can design multi-color, multi-material objects using any 3D modelling software and then prepare the file object using any slicing software. They can then run the code or x3g slicer output through Mosaic’s app (which is integrated as a plug-in into Cura) and send the the .SEEM file to the Palette though an SD Card. The system is also able to monitor the filament output to ensure each the object is being printed correctly.

The very well thought-out crowd-funding run is not just good on paper. The Palette is a very well thought-out product, which answers one of the 3D printing public’s biggest demands, leveraging on the existing installed base of desktop and prosumer FFF 3D printers (which is starting to become very significant) and offering a device which combines relatively software and engineering for optimal functionality.

Super Early Bird and Early Bird are already gone, however you can get your Palette for $849 or $999, with regular deliveries scheduled to begin in January 2016). Anyone seriously involved in 3D printing is probably considering it and the clear, well-presented explanations will do the rest. Like it (somewhat) happened for wireless connectivity boxes and cameras, the real potential of the Palette could be integration into the next generation of 3D printers. In that case you might start to see Mosaic’s .SEEM file format a lot more often.