Last year, a hopeful start-up emerged on the 3D printing scene, boasting former employees from Google and 3D Systems as a part of their team.  Source3 had been quiet since November 2014, so we had yet to see exactly how its founders, which had previously launched the successful RightsFlow music licensing platform, which was ultimately acquired by Google, would be bringing their experience to 3D printing.  Today, at Comic-Con, the company made its first big move, releasing a product that I’m sure many video game fans will be excited about: a 3D printed version of the cover art for Capcom’s Steet Fighter V, to be released in March, 2016. 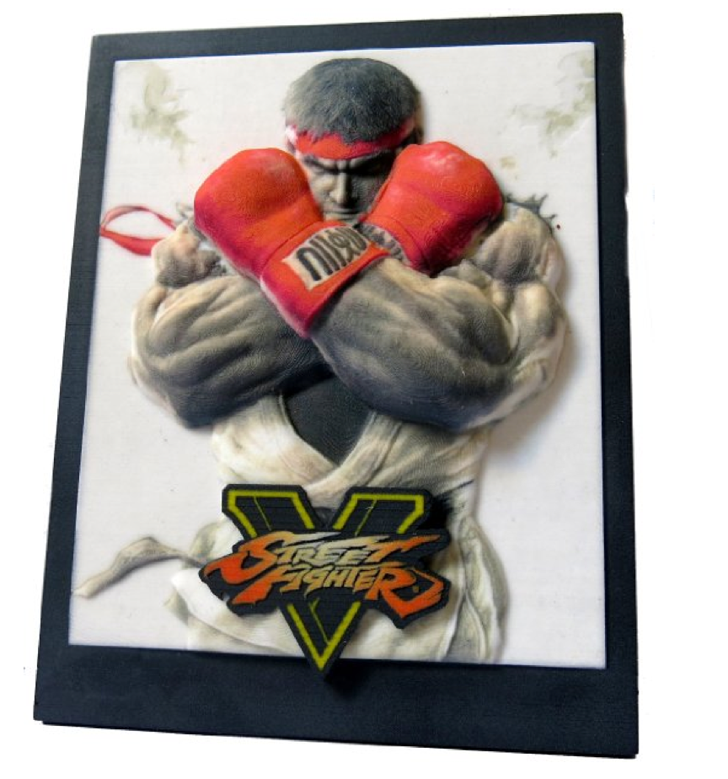 At the Capcom booth at Comic-Con in San Diego, attendees will get a chance to see the 3D printed cover, featuring Ryu in a bold fighting stance.  This is the first time that a Street Fighter character has been licensed for 3D printing and is among the biggest video game characters to be 3D printed.  Scott Sellwood, Co-Founder and VP of Business Development at Source3, says of the premier of their first product, “Our twin goals at Source3 are bringing premium, licensed content to the 3D industries and demonstrating the power of 3D printing to brands. It is exciting to work with a forward-thinking creative team like Capcom to use 3D printing to connect fans to iconic characters using innovative technologies.”

Francis Mao, Senior Director of Marketing, Creative Services, Events and Licensing at Capcom, Inc. USA, adds, “Capcom is excited to offer such a unique Street Fighter collectible to all its fans, utilizing cutting edge 3D technology. This is the first of many Capcom images that will be brought to life in the amazing world of 3D printing.”

To produce the prints, Source3 partnered with ZVerse, Inc., previously covered on 3DPI for its wide array of 3D printed sports memorabilia.  As Davide learned in an interview with ZVerse co-founder Kevin Maloney, the company is now generating more than $1 million in revenues with their Layr™ content creation platform, which creates 3D printable models from 2D images.

The game cover will be available for purchase at Comic-Con, as well as exclusively through Source3’s Amazon marketplace.  This news comes just after the announcement that Sandboxr had released custom 3D printable figurines from three different video games and that 3D Systems would be present at Comic-Con with a huge array of 3D printed characters from various movies, TV shows, and comics.  3DPI’s Davide Sher has, in the past, often emphasized the lack of interest taken by companies in the ability to easily merchandise game characters with 3D printing, but agrees that that is slowly starting to change.  It seems that, this year will be the year that the 3D printing of licensed content officially began to to take shape.  This means the competition will start to heat up and Source3’s background may enable them to say to their competitors, “You did quite well, but you need more training to defeat me!”