A number of tech giants are openly entering the 3D space, transforming 3D printing from its own isolated industry into a subset of the larger 3D ecosystem (called “reality computing” by Autodesk, “blended reality” by HP, and “mixed reality” by Microsoft).  And, as they do, there’s always an apple-shaped void waiting to be filled, leaving us to wonder where the makers of the Mac are in this emerging 3D scene.  Today, market research firm Piper Jaffray suggests that void may be filled with augmented reality, as Apple has poached a lead Hololens Audio Engineer from Microsoft. 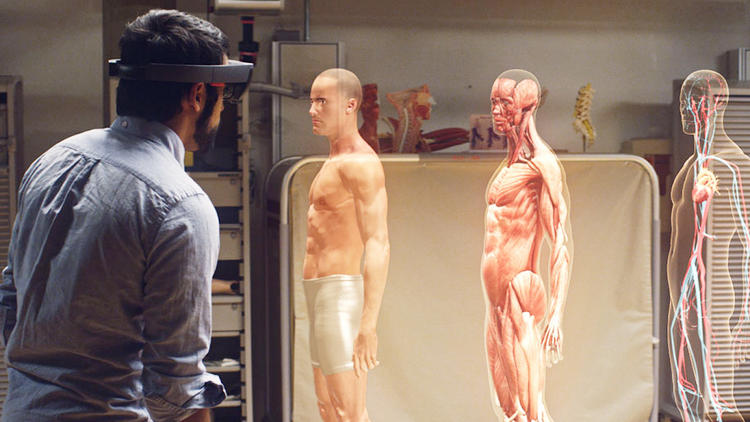 In the past two years, the world’s largest tech firms have made their intentions to capture the 3D market clear.  Autodesk is a key player, not just with its huge suite of 3D modeling tools, but also with its Spark 3D printing platform and Ember 3D printer.  Though HP will be making its Multi Jet Fusion 3D printing technology available for services next year, its Sprout computer is already prepping consumers for the tech with 3D scanning and gesture control powered by Intel.  Google’s Project Tango, I believe, will play an important part in transforming the space altogether by providing consumers with pocket-sized 3D scanning right in their smartphones. And Microsoft is finding its own angle in on the software side, but also with its AR platform, the HoloLens.  But where is Apple in all of this?

Though Occipital’s Structure Sensor brings 3D sensing to Apple products, Apple itself has barely made any loud noise in relationship to 3D anything.  Any noises they do make are barely audible whispers in the form of patent filings and acquisitions amplified by the tech giant’s power in the rest of the tech world. For instance, Apple’s patent filings for 3D printing conductive ink and liquid metal printing led to a good deal of speculation about when the tech company would being 3D printing complete electronic devices.  Then, when Apple acquired PrimeSense, the Israeli firm behind the Kinect and just about every subsequent low-cost depth sensor, we were sure they were at work on some sort of 3D scanner.  The acquisition of LinX, another 3D camera developer, only added weight to the idea that a 3D scanning iPhone was in the works.

And, in March of this year, Apple purchased Metaio, an AR software developer with 171 worldwide patents. Gene Munster, an analyst with Piper Jaffray, suggests that this, along with the hiring of a lead HoloLens Audio Engineer from Microsoft, demonstrates that the tech giant is working on augmented reality.  In a report on the subject, Munster explains, “Based on recent acquisitions of augmented reality companies, hiring of a key Microsoft Hololens employee, and conversations with industry contacts within the virtual and augmented reality spaces, we believe Apple has a team exploring the AR space.”

If this is the case, all of our previous predictions are not complete delusions.  In fact, while other tech companies make bold shows of their newest products or release the more cutting-edge gear in the form of developer’s kit prototypes, Apple is more likely to be hiding their R&D behind closed doors. And, as players like Intel and Google try to entice the public with their goods bit by bit, all signs point to Apple making a big splash with their own product, with the biggest difference being that theirs will actually be ready for consumers.  Munster seems to concur, saying that broad consumer adoption of AR is still 10 years away, but that what they do release will be a polished product and not a prototype.

Apple’s next big product unveiling is September 9th, where they are planning to show off the iPhone 6S and 6C, as well as a new and improved Apple TV, five years in the making, with Siri capabilities.  Will they also unveil their first product for the 3D ecosystem? If so, we can no longer call this site 3D Printing Industry, but will have to call it something much more representative of the hybrid/mixed reality ecosystem taking shape.  Maybe The Reality™ Institute would be a good name?