Earlier this year, rumours sprouted up about Apple’s possible intent to purchase the Israeli company behind the original Microsoft Kinect, PrimeSense, for $280 million. The story soon dissipated, with no transaction taking place. The rumor mill is at it again, this time with a bit more certainty. The same Israeli newspaper behind the first leak, Calcalist, reported on Sunday that the deal had been finalized with Apple offering a new proposal of $345 million to buy the fabless semiconductor company.

Most people are aware of PrimeSense for their development of the original Microsoft Kinect – or, as our newest member of the 3DPI writing team, Davide, describes it: “the first 3D mapping technology for everyone.”  The reasonably priced sensor is probably the first, and most prolific, consumer-grade 3D scanner to hit the market, revolutionizing the way that people look at their environment. Its compatibility with any OS has given it a huge range of applications developed by independent Makers, such as virtual theramins, interactive dressing rooms, and motion controlled robotics. In fact, the device is so versatile, simple and sophisticated that there’s an entire website devoted to Kinect Hacks. For our purposes at 3DPI, the Kinect has seen a number of firms use the sensor for their proprietary 3D scanning and 3D printing software.

Though PrimeSense’s name has been mentioned in various other places on this site, it might not be immediately apparent that the company is also responsible for a number of other high-tech devices. Most recently, and relevantly, the company’s sensor technology was incorporated into 3D Systems Sense 3D handheld scanner. Additionally, PrimSense tech plays a vital role in both the iRobot Ava, a mobile robot currently in development, and the RP-Vita, a remote presence robot that may act as your doctor someday soon[1].  They’re also behind the sensor for this brilliant MIT project that transforms 3D data into a series of shape-shifting blocks. 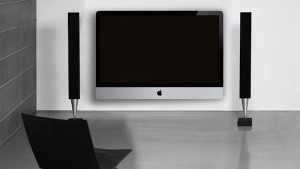 The point is: this acquisition is a big deal. No longer will we see PrimeSense components  sed in a wide variety of applications from a variety of companies. Instead, we will see it used only by Apple. What might it be used for? The Verge suggests that the Apple TV, now slated for 2015, could utilize a Kinect-like sensor for interactive TV watching[2] (changing channels with the swipe of a hand, voting on American Idol, or even tracking your eye movements during ads to know how to tailor your “marketing experience”).  It’s also possible that the mega-company could manufacture their own 3D scanning technology to push Occipital’s Structure Sensor for the iPad to the sidelines. Also, think: 3D cameras for iPhones, facial recognition and gestural interaction for laptops. The last application is already in development by Intel, as we covered previously. This also means that Apple could, potentially, compete with Microsoft when the time comes for integrating native 3D printing capability into their new line of computers. A built-in scanner would make 3D printing that much easier in Apple devices.

The deal has yet to go through and may not even be real, as PrimeSense put out this statement:

We are focused on building a prosperous company while bringing 3D sensing and Natural Interaction to the mass market in a variety of markets such as interactive living room and mobile devices. We do not comment on what any of our partners, customers or potential customers are doing and we do not relate to rumours or re-cycled rumors.

But All Things D has reported that unnamed sources have confirmed that the deal is taking place and that it will finish at the end of the week. This won’t be the first time that Apple has purchased an Israeli company and, if Intel’s facility in the country is any indication, the relationship between the US and Israeli tech industries is only going to get cozier.

[1] Davide, who tipped us off to PrimeSense use in iRobot products also let us know that “iRobot’s founder told me once they are the biggest users of rapid prototyping technology in Massachussets and that he now believes 3D Printing is the future.”

[2] Though the idea of “interactive” anything, in terms of technology is merely a marketing ploy, pretending that not everything you do is active. Slap the word “interactive” onto a book and you’ve stepped into the 21st Century.