3D Systems Covers its Bases with the Sense 3D Scanner

After launching a complete 3D design suite (and purchasing every company on the planet), it would only be logical that 3D Systems would also develop a handheld 3D scanner. The Sense 3D Scanner is an entry-level device that captures full-colour 3D scans using its own proprietary software for $399.

3D Systems’ Sense handheld scanner can capture a volume of between .2 meters to 3.0 meters, using a Class I laser from PrimeSense, the same people who brought you the original Microsoft Kinect. The scanner cannot work without its proprietary software and the software does not work without the scanner, but all files can be exported as .stl or .ply (for colour capture) for use with any 3D printer. Sense’s resolution has a polycount of about 20,000 to 400,000 triangles for each new scan.

Most notably, the scanner features automatic object recognition, which quickly isolates a given object from its background noise. The software accompanying the Sense device also boasts the ability to mesh together multiple scans with ease so that you can scan an object multiple times, in case you miss any details, and stitch them together in post processing. This second feature seems helpful, to me, after having used a Kinect and various programs that make post-production mesh merging a pain. 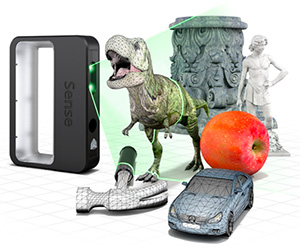 This release from 3D Systems is an obvious jab at its competitor Stratasys’ Makerbot Digitizer, upping the 3D scanning ante both in terms of price and functionality. At the same time, the Sense competes directly with the Fuel3D handheld scanner by dropping the price tag significantly from Fuel3D’s $990. The Sense still faces heat from the Structure Sensor for the iPad, which runs at about $349, but also requires that you own an iPad. My only beef with this device is that it, like most 3D Systems products, only works with Windows for the moment. As a personal confidant of Avi (my wife and I took a picture with him and everything!), I don’t know how he could do this to me.

The Sense 3D Scanner will be available at Staples and Staples.com from November 17th, just in time for Thanksgivukkah. And if you need a variety of presents to break up over the course of all eight nights, you can purchase several different Sense bundles, that pair the scanner up with design software and/or a Cube or CubeX Duo and extra filament cartridges.  For more info, visit Cubify. For a demonstration of the scanner in action, watch the promo video below: