Just three and a half hours after its launch, the Structure Sensor, a 3D scanner for mobile devices, met its funding goal of $100,000 on Kickstarter.  And, at the time of this writing, the crowdfunding campaign has already exceeded its goal by a multiple of five, raising over half a million dollars.  This is indicative of two things: people are thirsty for an affordable, high resolution 3D scanner and they have a lot of faith in the company developing the device, Occipital.

Occipital has been, until now, traditionally, an app developer, releasing the Red Laser and 360 Panorama apps.  After working with outside tech companies, like PrimeSense, the geniuses behind the original Microsoft Kinect, the software team was able to teach themselves how to be a hardware team.  With their immense funding, they’ll be able to release an affordably priced – around $360 – sensor for the iPad. 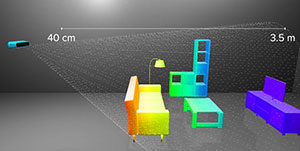 By capturing laser light reflected off of the surfaces of objects, the Structure records depth information for multiple distances simultaneously. The team built the current version of the sensor specifically for the iPad so that it slides over the tablet’s camera.  As Jeff Powers, founder of Occipital, told Mashable, “Our camera is actually axially aligned with the built-in camera. That’s important because we’re fusing the data from those two sensors. We’re also fusing the gyro and accelerometer that’s on board. In the iPad, you kind of have the rest of the story, but it was missing this active 3D sensing.” 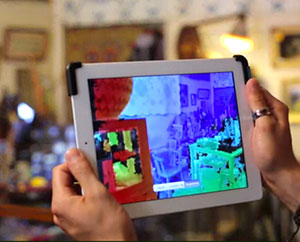 The sensor is meant to be hackable, with APIs for highly skilled users and for the not-so-highly-skilled users. It also includes a USB hacking cable, open source drivers, and CAD files so that developers can adapt the Structure Sensor to other devices. What I learned at the Inside 3D Printing convention in San Jose is that, by making aspects of a project open source, you’re not only making your project more accessible, but you’re making it cheaper.  The team can have their tech spread at the same time as they save time and money by not putting in the legwork to adapt the scanner to other devices.

What I also learned from the conference is that quality handheld scanners are so expensive that I’ll never get to own one. The Artec Eva, for instance, runs at about $18k. Even the Fuel3D, which conquered Kickstarter with “a handheld 3D scanner for less than $1000”, seems expensive now for people who already own an iPad. The Occipital scanner doesn’t look as though it captures the colour data, the way that the aforementioned scanners do, but, by integrating it into smart devices, the Structure Sensor opens up new possibilities for augmented reality.

In addition to the object scanner, useful for 3D printing objects, the Occipital team has developed a room-capturing app, which allows you to map an entire room and then measure the distances between objects, obviously useful for trips to IKEA. They’ve also created ball physics and virtual fetch demos, demonstrating the potential for AR.

Check out the Kickstarter video below for more details: