University of Southern California & the Realization of 3D Printed Houses

At ComputerWorld, there’s a great post by Lucas Mearian covering the Contour Crafting talk I mentioned in my review of the Inside 3D Printing Conference.  If you missed it, the lecture, titled “Robotic Building Construction using Contour Crafting”, covered the very real prospect of constructing large scale structures, buildings in particular, with 3D printing. 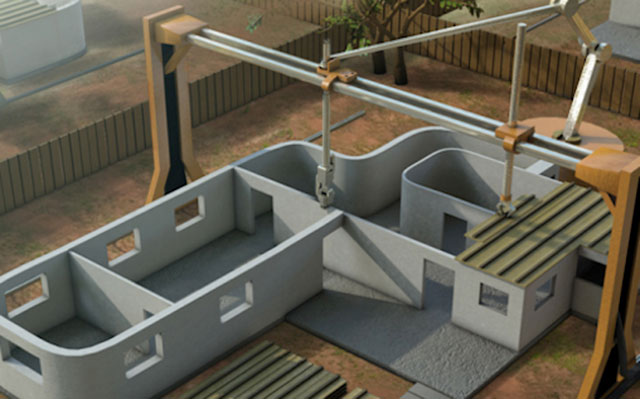 The University of Southern California’s Behrokh Khoshnevis outlined how a novel extruder mechanism combined with robotic machines could efficiently print habitats. Through a great deal of trial and error, Prof. Khoshnevis was able to make a printhead that can extrude wet cement in such a way that, thanks to a trowel fixed to the head and a special hardener, the cement is able to keep its form as each successive layer is printed.  As he joked, to the delight of architects, builders, and manufacturing professionals in the audience, “maintaining the viscosity of concrete is no trivial manner.”  The video below from the conference, captured by Mearian, depicts the process:

Using this method, the professor has created walls that are six feet high, with layers that are 6 inches high and 4 inches thick, and he believes that it can be expanded to whole buildings, saying that, with Contour Crafting, it’s possible to construct the entire structure of a 2,000 square foot house (floors, walls, and roof) in less than twenty hours.  The 3D printer, mounted onto a gantry frame and weighing about 500 lbs, could be brought to a construction site, where it would contour craft the house either like a giant RepRap, with the ground as the build platform or, possibly, climbing up the house[1], one layer at a time, and returning back to the ground upon completion of a job.  He also suggested placing the printer arms on rails so that they could print one house and slide on down the line to construct another, making it possible to print whole neighborhoods quickly. 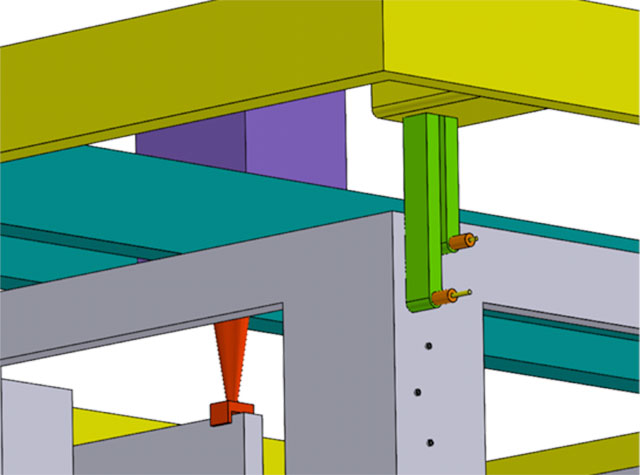 This technique, and others that the Khoshnevis research team is working on, would present a number of solutions to problems facing the modern world.  Alongside the JPL and ESA projects aimed at printing habitats on the Moon and Mars, Khoshnevis has come up with a proposal for laser sintering moondust – lacking the water necessary to extrude concrete – to form a landing station for future spacecraft, complete with regolith blast shield capable of deflecting the debris of an incoming ship.  He’s even simulated the process on Earth, sintering rock by using sulfur as a binder.

Additionally, and, to me, more relevantly, the professor believes that his technology would make the construction of efficient buildings so cheap and efficient that we could print low-income housing for people in impoverished areas the world over.  Because current construction techniques are, as Khoshnevis puts it and as Lucas Mearian cites it, “wasteful and emission causing and corruption prone. And, the cost is always over budget,” 3D printing homes would save time, as well as reduce waste and human error.   The process could also save lives, as Mearian explains that working construction is “the most hazardous job in the world, with 400,000 people injured 6,000 to 10,000 killed in construction accidents every year in the U.S. alone.”

In the 3D printing process, steel reinforced cement can be used, but, as the professor points out, specific printed geometries will yield more stability than the traditional cubes we often find ourselves in in the Western world.  Flat walls lack the stability of the curves made possible with contour crafting.  With the ability to print, quickly and affordably, architecturally sound buildings, Prof. Khoshnevis believes that we could have prevented the loss of life brought about by natural disasters, such as the 40,000 people lost in an earthquake in his native Iran.

The team is already focused on creating complex extruders and robotic arms that give the impression of a hybrid manufacturing process, with arms that can eject and shape concrete at the same that other arms insert plumbing, wiring, insulation and the like.  What’s missing from the proposed toolbox, in my opinion, is a subtractive manufacturing process.  Not milling, but the ERO Concrete Recycling Robot, a proposed robot that shoots high-pressured water at concrete, causing it to break apart, and then collects it for reuse.  Combined with Prof. Khoshnevis’s concepts, it would be possible to erase old structures, or portions of old structures, and reconstruct them on the spot to yield more sustainable, more useful buildings suited to the needs of our modern world.