As the potential mega trend of a future with local-based manufacturing and consumption is widely discussed in the academic and business world, 3D printing is often cited as one of the most relevant techs to be harnessed in this regard. In this dialogue it’s most often linked with the slowly emerging C-to-C market as the example as opposed to the industrial, general B-to-B and B-to-C sectors and the very different fundamental mindset behind those different models. Even though the freedom of individual creation via new tools is an appealing and very interesting angle, it certainly isn’t the first step on this new path, but rather a phase still very far away.

The industrial sector seems to be currently firmly in the driving seat of the many innovative developments related to 3D printing, with many proven, marketable and usable applications — especially in the medical sector as well as components for aerospace and other tech-oriented businesses. However, before using 3DP for manufacturing actual end parts, the phase of creating prototypes is something that more and more companies are doing — and benefitting from — even without extensive funding from the federal government or being mentioned in the world’s biggest company listings. For example, a company producing lamps that are manufactured in Asia could add value to their operations by first moving the complete prototyping work to the country where their headquarters are based, which is what Lamplight Farms has done. The value-adding element in this case consists of the two basic business elements – time and money – which are both saved due to this new way of conducting business.

Before moving the prototyping work completely to Columbus, GA, Lamplight Farms used to send the initial lamp designs to its manufacturing locations in China and India for prototyping. This process, besides consuming human resources in two different geographical locations, obviously also took a lot of time due to the physical distance and communication challenges – communicating and translating design language and transferring the mental image of an intricate design can be as hard as the human interaction goes in general. Director of Engineering for the company, Ron White, explained: “[the prototype] sometimes looked like it came whittled by hand, so to speak. More often than not, it took two to three, sometimes half a dozen times to get it right.” Timing-wise this meant even months, which in this product category can be considered a very long time, as several new products are introduced each season whilst the old products also get an aesthetic face-lift as well. The demand for seasonal new products also comes from Lamplight’s retail customers, for whom Lamplight creates unique customzed collections of their Tiki and other lights and torchers. 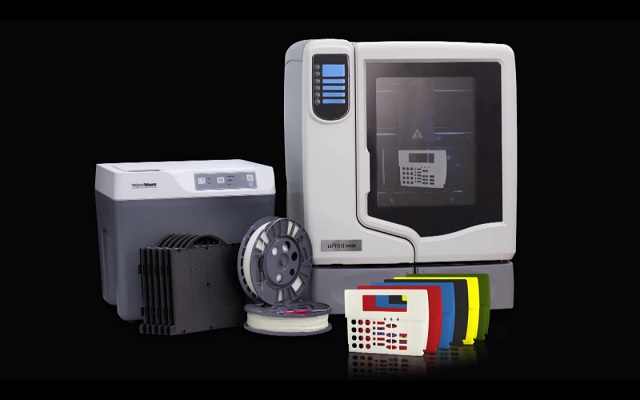 Frustrated by these unnecessary problems with their design process, Lamplight purchased a Stratasys uPrint FDM 3D printer and decided to move the prototyping in-house (and in-US). The company wasn’t unfamiliar with 3D printing tech even prior to acquiring one, but the high cost levels of a suitable machine had postponed the purhcase process by a couple of years – in this case meaning huge procentual savings for Lamplight. Besides saving on the initial cost of the machine due to waiting – a $22k investment in itself – the new prototyping process is also now saving other costs incurred with the old business model. So much, in fact, that the Stratasys 3D printer they use is expected to pay for itself  before the end of the year, according to Ron White. Even though the prototypes are obviously not completely functional – as plastic and open flames of the Tiki torches might not mix very well – they offer substantially more benefits than they lack – including the old way of sending poorly made prototypes back and forth to China.

This case is a very good example of how 3D printing can be applied to a design-oriented company’s operations despite the specific industry they are in. Faster and more inexpensive prototyping work, whether done completely in-house or by a separate design company, enables a much more efficient and faster iteration process, where the new designs can immediately be evaluated and revised – or canned – according to the company’s explicit needs. In its most bare-boned form, there are hardly any good justifications for any company whose work involves product design in any way to not move to using a 3D printer as the prototyping work-horse of their operations – even if it would initially mean a company-wise cheap prosumer FDM machine instead of an industrial pro-grade printer.

If you want to take a look at how Lamplight’s Ron White himself sees 3D printing having changed their business, you can take a look at the video here, presented 3D printer supplier Graphics/Systems.