The New York Maker Faire 2013 bore witness to a very promising home metal 3D printer. This Liquid Metal Jet printer goes by the name of Vader. The Vader metal 3D printer is created by father-and-son makers Scott and Zack Vader at Vader Systems. Yes, it does have a hexagonal tie-fighter style print bed. Yes, it does come in black… 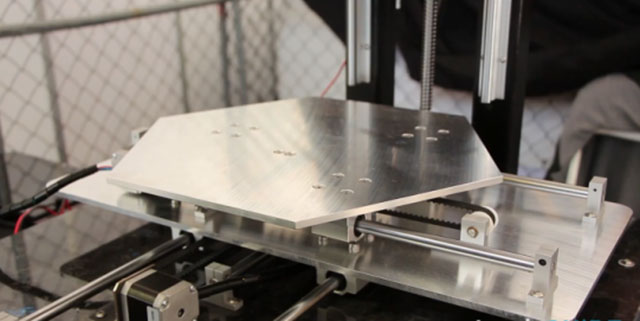 The first step in the printer process sees an on-board cuboid electric furnace melt metal ingot for the extrusion material. A conventional 400-watt power supply powers the device – energy efficiency is not a problem here. The furnace is seen in the feature image as encased in a glossy-black cube.

Natural or induced magnetism propels the melted metal onto the printer bed: some metals naturally have magnetic properties; others, such as the first planned material for the Vader, aluminum, requires the electrical charge.

A head akin to that of an ink jet printer lays down droplets, layer by layer, building up the molten aluminum additively. By changing the extrusion orifice size, molten spheres of metal are then deposited.

The device can utilize thousands of nozzles to run at a similar speed to that of a 2D inkjet printer.

Zachary Vader, the 20 year old former mechanical engineering student son in the family team, believes copper, silver and gold should be relatively easy to add. Because the electrical conductivity of the metal is key to the printing mechanism, though, adding new materials may require some tweaking of the process,

The Vaders finished putting together the prototype a few days before their NYC Maker Faire debut, missing the print head. However, this process sounds feasible, if technically difficult to accomplish for a home maker team. These guys are performing near miracles.

The current version is designed for small businesses, with an intent to produce a sub USD$10,000 version aimed at home prosumers within a year. This will offer an interesting alternative in home metal 3D printers to the inevitable forthcoming laser sintering offerings when the technology’s patent expires next year.

More information on Vader Systems can be found here.