Here is a thing that looks like it won’t work. When its designs were first introduced to the RepRap forum/community, some members immediately began speculating that it lacked the sturdiness to complete a print.  With no frame and with heavy pulleys making it top-heavy, the Simpson 3D printer looked like it would twist and bend and throw plastic all over the place, possibly even fall over. But the RepRap community is a strong one and members do like to help in the creation of new RepRap variants; so the machine’s creator, Nicholas Seward, was not without friends.

Based off of a little YouTube snooping, I learned that Nicholas is a computer science instructor at the Arkansas School for Mathematics, Sciences, and the Arts (ASMSA).  He has a Bachelor of Science in mechanical engineering and is pursuing a Masters in physics at the University of Arkansas. Interestingly, Seward is giving online courses for ASMSA students during the summer via YouTube. After studying the various RepRap models and building his own Printrbot, the man had a dream, a dream of “a static motor arrangement and less vitamins.”

What Nicholas is seeking to do is to create a cheap 3D printer with a low centre of gravity, and no boxy enclosure, that could print almost 100% of its own parts.  So, the fewer the ‘vitamins’ (anything not printable like stepper motors and ball bearings), the more of itself Simpson could easily reproduce.  And the low center of gravity would give the thing stability.  To do this, Seward inverted the Rostock delta design, placing his motors at the elbow joints instead of the shoulder joints, and attaching his arms to the base of the machine, instead of hung from above.

But he couldn’t have done it without the support of his community. Fellow RepRappers helped him bounce ideas so that he could create a sort of free-form printer with a large enough build volume. The forum thread quickly turned into things like this: 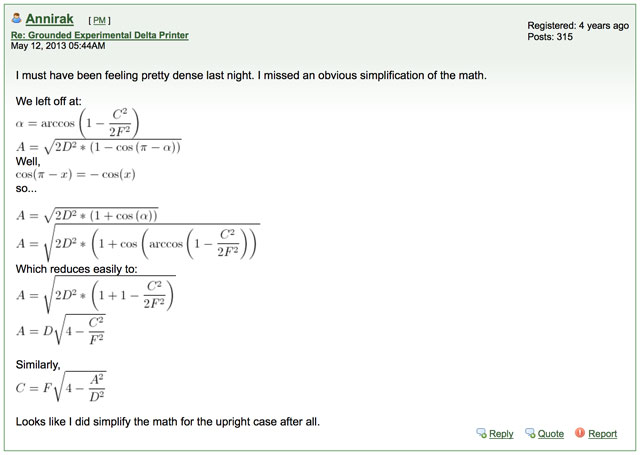 And with such mathematical formulae, Nicholas was able to develop programming and create a fully functional and revolutionary delta-style printer.

The name derives from George Gaylord Simpson, responsible for the theory of quantum evolution, in which leaps can be made in evolutionary progress in bursts in addition to the traditional notion of gradual change.  And Seward applies it well to his bot:

I really have no problem with linear motion (Linear motion is great. There is a reason it is so prevalent.) other than that it requires a lot of vitamins. Additionally, innovations can come from evolution or revolution. Evolution has the benefit of pulling the best of what has come before to make an incrementally better machine. Revolution has the benefit of opening up avenues that evolution ignores. (I think mutation is a good analogy.) I am quite sure the first machine I build that has no linear motion will be less capable than the status quo. However, lessons will be learned and added to the collective knowledge. Those evolutionary machines can then take the good ideas and leave the bad ones.

The Simpson at work can be so mesmerizing, these three different arms operating in unison, moving together from left to right like a team of bobsledders with a single goal in mind. Unlike other RepRaps, trapped inside of rigid frames, there is something organic about Simpson. It’s no wonder then that Nicholas sees it more as a robot than a printer, saying, “I want a machine that can walk or crawl and hopefully scribble its name. Maybe later the machine will run or skydive and make works of art. This is new territory for me and if I am not messing up then I am not working hard enough.”  Maybe he’s right and that, even if all future printers don’t look like Simpson, some great insight will come from Simpson’s design that will cause RepRaps to make an evolutionary leap forward.