The swissPen — A 3D Printing Tool From Switzerland

There was a great deal of buzz and not a little controversy when 3Doodler launched its so-called 3D printing pen on Kickstarter back in February. The product caught the imagination of many and soared right past its funding goal into the millions. The 3Doodler team is currently in the later stages of production and shipping is still forecast for October, according to my periodic updates (having ordered one).

Earlier this month a Chinese company, YaYa3D, released an almost identical clone of the 3Doodler, it is available now, from the iMakr store, among other resellers.

And now there is another one heading our way, this one is SwissPen from 3D Print Switzerland, also due to start shipping in October

Interesting that RichRap’s prediction of ‘a rush of clones’ seems to be coming to pass (from comments on Voice of the 3Doodler Dissenters). Not that surprising though, considering the interest and the funding that 3Doodler secured. 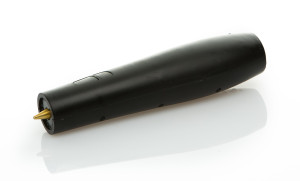 So the Swiss outfit has dubbed the SwissPen as the “world’s simplest 3D  tool,” this is because it comes ready to use, with no assembly or configuration required and has been designed to be fully intuitive. The premise is the same — it draws by extruding plastic (PLA or ABS) that has been pre-heated, to create free-hand shapes and objects. Alternatively, it can trace 2D images to create them in 3D. Thus, the swissPen can be used to draw in

the air or on surfaces. It is compact and easy to use, requires no software or computer and be used on  a range of surfaces, including plastic, glass and paper as depicted in the introductory video below.