3Doodler is Not the First Hit on Kickstarter, but it is the First 3D Printing Pen

It’s like they removed the extruder from a RepRap and started drawing with it! 3Doodler is one of those genius ideas that seem so obvious in hindsight that you kick yourself for not thinking of it first (or for not having an engineering friend from MIT and a factory in China). The premise is simple: a pen that draws in heated ABS or PLA plastic, giving you the ability to build 3D objects in the same way a 3D printer would, but without the skills needed to create CAD models or operate a 3D printer.

Created by MIT graduate and inventor Pete Dilworth and toy designer Maxwell Bogue as a product for their company, WobbleWorks[1], the 3Doodler has already more than tripled its Kickstarter goal of $30,000 with 33 days left to go, proving that Pete and Max were right in assuming a high demand for an affordable and simple to use 3D printer.  As their site states, “If you can scribble, trace or wave a finger in the air you can use a 3Doodler. As you draw, plastic comes out of the pen, is cooled by an integrated fan, and solidifies right in front of you. You can draw on any surface and lift it up into the air to create your own 3D objects.”  While there is no stated cost yet, at the time of the campaign launch, one could purchase a 3Doodler by backing their Kickstarter with as little as $50.00 and shipping of production products is slated for October of this year.

The pen itself weighs less than 200 grams, about the same as an ordinary apple (according to their Kickstarter) and is 180mm by 24mm in size (about 7 inches by 1 inch).  The 3Doodler is powered by the provided universal power supply so that, once you plug it into the wall, you can begin drawing.  It uses 3mm ABS or PLA filament and the company will be selling them in one-foot strands, rather than spools, as the one foot strands translate into 11 feet of doodling ink.  Just like a standard fused filament printer, the pen heats the plastic up to the point of melting, 270˚C.  The internal cooling fan allows for the plastic to cool extremely quickly so that you can draw 3D objects right in the air, without supporting structures it seems.

And there are abundant examples on the Kickstarter campaign page demonstrating how one might use a 3Doodler. Aside from drawing 2D objects and standing them upright or drawing up into the air, the company plans on providing stencils that you can trace with the 3Doodler that you can assemble, and bind using the heated plastic, in order to create more elaborate shapes.  Other uses include customizing iPhone cases, computer monitors, or anything else you can think of and repairing broken objects by using the 3Doodler as a “plastic welding tool”.  The pen currently has two different speeds and the company plans on releasing multiple print heads, allowing for a flexibility that would resemble the use of different brushes in painting. 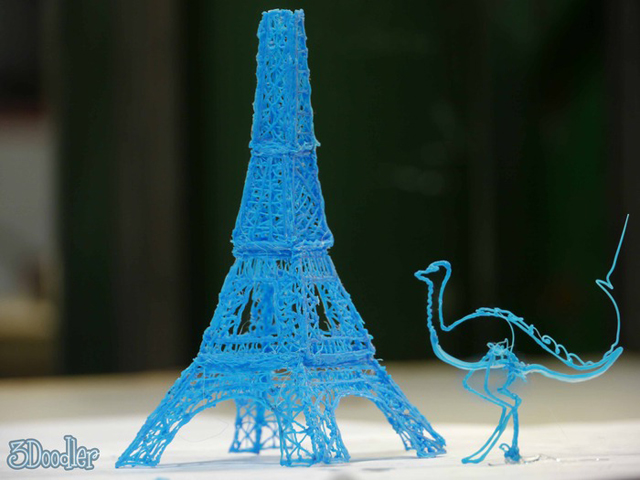 While it’s more probable that, at the current stage of development, the 3Doodle is more appropriate for artists and hobbyists, rather than engineers (although the number of backers on the first day would suggest anyone and everyone) the range of complexity one can achieve with the pen may really be dependent on skill.  Pete and Max are in the process of working with some artists on Etsy to create elaborate 3Doodle sketches that may demonstrate just how sophisticated the tool can be.

[1] If you want to see some of the other cool stuff Max and Pete have been working on, go to their website. They’ve even built robotic dinosaurs!