Voices of the 3Doodler Dissenters

So as the 3Doodler, which Mike covered a couple of days ago on 3DPI, surpasses $1 million worth of pledges on only the fourth day of its campaign – you would be forgiven for thinking that the 11,000+ backers were on to something. Well, as one of said backers, I can’t deny that I am eagerly awaiting the arrival of this new toy and using it, and encouraging my children to use it. To date, this is the first “3D printing” product that I have thought: ‘Yes, absolutely! I can do that – I WANT to do that!’ And, at $75 it won’t break the bank – even if it doesn’t go to plan. There are 11,817 other people (at the time of writing) who seem to agree with me.

Of the many positive reactions that I have seen, I think that renowned designer, Michiel Cornelissen’s is my favourite, he tweeted: “I was giggling with excitement during the whole video of 3Doodler 3D Printing pen. You bet I backed!”

So, yes, lots of excited people, me included.

But there are a few dissenters, with rather irate voices, making their feelings known.  A small group that do not consider the 3Doodler to be either 3D printing or even anything remotely new. I decided to follow up with them, because I know most of them personally and hold them in high regard in terms of their knowledge, expertise and experience in the 3D printing field.

Here’s what they told me, when prompted for their (publishable) opinions:

The paradox is that the more people try to make 3D printing look good with wild claims the more they make it look bad by damaging its credibility when it fails to meet inflated expectations. ”

Kevin Quigley, who has run his own Design Consultancy for 20+ years, and contracts 3D printed parts regularly:

“Is this pen a new idea? Yes. It combines existing technologies in a slightly different way. Does that make it a good product? No. It is not a revolutionary new 3D printing device as some claim. It is a novelty, nothing more. The fact that it gained funding on KickStarter is irrelevant. The team behind it are good at marketing, they exploited the current 3D printing hype and they priced it low enough for people with spare funds to consider it a no brainer purchase. Good for them.

For me it is yet another gimmicky 3D printer product squeezing out overpriced plastic that offers transient interest to people with too much money and time who probably drive to Starbucks in their Prius to tweet their followers about the new stringy bird they made. Harsh? Perhaps. But for me, as a 3D printing user for 20 years I had hoped that by this stage we would be doing something more meaningful with the technology. The 3rd Industrial Revolution this is not.

I consider this to be an example of a bad product. It consumes resources and produces rubbish. If people are daft enough to buy it fine, but don’t expect the rest of us to be wowed by your stringy plastic tat creations.”

“I’m just a little disappointed that from the institute that brought us the people who invented and developed 3D printing (or call it what you will) in the eighties we are now 30 years later getting cheep toy makers (doubt it will be cheap, but it looks it, not to mention what it produces), feels a bit like a step or 6 backward for the 3D printing / Additive Manufacturing world. Saying its a 3D printer feels more than a little dishonest, the equivalent of stickle bricks billing their product as a cheap easy to use construction material perfect for your new home or office block.”

“Even if the 3Doodler is an innovative idea, of which I am not convinced, I don’t see a real use or need to create tiny, unstable plastic shapes/items. From my perspective it is just another “toy” which will add more plastic garbage to our planet. Nowadays, society discusses sustainability and econological aspects of products. How does a tool like the 3Doodler fit into this? How will people dispose of failed sketches, just throw them away? Eventually, I am concerned that ABS plastic is promoted in the first place. ABS produces fumes when melted which may irritate the eyes, skin or respiratory tract.”

“When I first saw the 3Doodler the first thing I thought was ‘It’s not 3D printing – it’s a modified hot glue gun!’ Just because it’s done well on Kickstarter it doesn’t mean it is a good product. My worry is that we are cheapening everything that we have achieved over the last 25 years in the Additive Manufacturing industry and products like this just do not help. This focuses people’s attention on toys rather than the real advantages of AM in the industrial sector.”

So a number of issues there, and it’s important to have different perspectives, I think. While this lot have made me stop and think, personally I am not adverse to embracing the 3Doodler under the umbrella term of 3D printing at the lowest end of the spectrum AND I am still looking forward to October. We’ll find out then whether my (and others) excitement is justified, or whether I have to concede defeat. In the meantime, why not share your opinion here too. Have you backed 3Doodler, will you or is it indeed just a modified glue gun?

I’ll leave you with a visual image from Magnus (on Twitter yesterday) that sums up his main point – that a glue gun is not a 3D printer!! 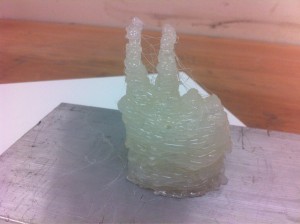