Beware: Confusing names ahead! We have Richard Van As, Ivan Owen, Liam Owen, Paul McCarthy, and Leon McCarthy.  It may be hard to keep them all straight!

My fifth post working for 3DPI was on the collaboration between two people separated by 10,000 miles, Richard Van As and Ivan Owen, who worked to create a prosthetic hand for Ivan’s son, Liam, and for Richard himself.  Their project has since grown so large that it’s begun affecting the lives of people all around the world, including that of Leon McCarthy, who has become somewhat of a media sensation, demonstrating the success of 3D-printed prosthetics on news outlets such as Fox & Friends and CBS Nightly News. 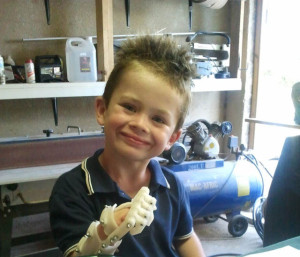 If you haven’t heard about the project, Richard and Ivan both had a problem that they needed to solve.  Richard lost his fingers due to a woodcutting accident, while Ivan’s son lacked the standard number of fingers due to his congenital Amniotic Band Syndrome.  After coming across a mechanical costume hand that Ivan, a special effects artist, had made online, Richard made contact and the two set about designing a mutually beneficial prosthetic.  A donation from MakerBot allowed them to work on their devices, emailing and printing their 3D models, across 10,000 miles.  Finally, the two developed cheap, easy, usable prosthetics for both Richard and Liam.

The case is a wonderful example of how the distribution of 3D files online can allow people to work on the same project remotely.  By printing the models, Richard and Ivan were to work on them independently, modifying parts here and there, then send their new versions to each other once again, learn from one another, and update their designs further.  The physicality of 3D printing combined with the virtuality of the Internet led to an idea that has since pollinated across the world.

A case in point is Leon McCarthy. Leon was born with the same syndrome as Liam.  His father, Paul — a special effects artist himself — scoured the web for two years looking for a solution.  Finally, he found the work of Ivan and Richard. Their solution proved to suit Leon perfectly.  Since the original design, which was a combination of machined parts, metal pins and other scraps, Ivan and Richard had moved to a fully-3D-printed design, dropping the price tag on what should be an expensive product even further. Therefore, when it came time for Paul to print one for his own son, Leon, the whole thing only cost about $10.

Richard and Ivan’s idea has continued to spread. Leon McCarthy’s teacher has applied for a grant and received a MakerBot for their charter school so that Leon and Paul can not only produce better iterations of the boy’s hand. They will also be able to teach classes on 3D printing, so that Leon’s fellow students can develop prosthetics for other children with Amniotic Band Syndrome. 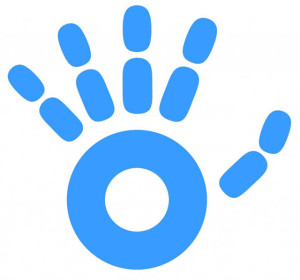 Meanwhile, in South Africa, Richard Van As’s side of things has bloomed even more with Richard developing a full-fledged prosthetic factory called RoboHand, made up of MakerBots printing the parts to develop fingers, hands and arms for those with Amniotic Band Syndrome.  Simultaneously, the UK’s Open Hand Project is striving to move from a purely mechanical device, like Richard’s, to something that incorporates electronics and motors, as well, which will aid a more general population than either Ivan or Richard could achieve.  With all of these developments together, the idea of open source, affordably priced prosthetics are spreading in influence and access on a daily basis.

What we’re seeing is a powerful relationship, between the Internet and 3D printing. The former makes the sharing of data extremely easy, so that users from remote locations can communicate instantaneously. The latter allows that data to be transformed into a reality, almost instantaneously.  It’s not hard to imagine a next step, bypassing the traditional channels of large manufacturers and medical suppliers, in which users make things together, for one another, as affordably as possible. This brings me back to the beginning: did Fox News, born in the Nixon White House, unwittingly contribute to a leftist revolution?