Across the Miles — 3D Printing Lends a Helping Hand

All of my friends will tell you that I’m an eternal optimist. The world can be a terrible place, if you think about all of the large-scale problems found in almost every country of the world, but I have supreme faith in my species and in what Buckminster Fuller called “the structural integrity of Universe[1]”.  Take the problem of unaffordable prosthetics, for instance.  The majority of people in need of prosthetic limbs simply can’t pay the huge price charged by medical supply companies.  But human beings are resourceful and, in my opinion, for the large part, altruistic.  As a result, you find people like Rich and Ivan who have been trying to overcome that obstacle by working on open-source, 3D-printed finger prostheses that can be uploaded to Thingiverse and downloaded by people the world over.

In May, 2011, Richard Van As, a South African woodworker, had an unfortunate accident in which the four fingers of his right hand were cut clean off by a table saw.  Calmly, he placed the fingers in his apron pocket and drove with his wife to the ER.  And, as the triage doctors were cleaning his wound, Richard examined the tendons and bones within and decided, “I will make myself some fingers again.”

He had an impulse to go to major prosthetic manufacturers, but was faced with the fact that the price tag on such a solution was $10,000 a finger.  Next, he searched desperately for a DIY project, someone who might have tips on how he could build new fingers himself.  And after days spent extensively rummaging through blog articles and videos, Rich was on the verge of giving up.  But, as you read his story, you can tell that he must be an optimist, too.  He makes constant jokes and puns and doesn’t let roadblocks prevent him from finding novel solutions.  So, finally, he came across Ivan Owen of Washington State, USA, a programmer and automation technician, who happened to have created a large, mechanical hand as part of a costume.  After posting a video of the hand on YouTube, Ivan was contacted by Rich to help him out.  Really, it was an invitation to embark on a journey that would change both of their lives. 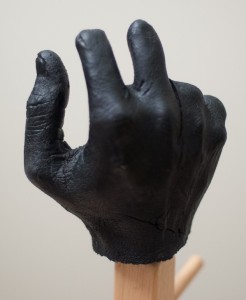 The two began exchanging designs via email and Skype, truncating the 10,000 miles between Washington and South Africa to a mere bandwidth.  Rich even mailed Ivan a mold he had made of his own hand, giving Ivan a better idea of how to construct the prosthetic.  After toying with erector set constructions, made from “hair ties, zip ties, leather scraps, velcro strips, string, moldable wax, and rivets”, a functional prototype was created.  They proceeded to enhance their design to round off the edges and make it more powerful.

Ivan, Rich, and their spouses, Jen and Beth, funded the project entirely through donations, based on the time-honored methods of word-of-mouth and press coverage in favor of crowdsourcing platforms like Kickstarter.  With a flood of donations and community support, they were able to purchase a milling machine for Rich to make “extremely detailed, custom hinges, gears, axles, [and] pulleys.”  The donation of airline miles from Rich’s friend, Mark Cowley, made it possible for Ivan to fly out to South Africa to meet Rich in person.  And it was only after the kind folks at MakerBot responded to a request for help that the prosthetic became easier to produce. Their donation of two Replicator 2’s, one for each user on either side of the planet, allowed the two to work together in a way that was truly unique:

It is incredible. Truly something that feels like it’s straight out of science fiction. What this means for us is that, although separated by 10,000 miles, Richard can design, test and then email a three dimensional object to Ivan. Then, Ivan can make changes to the design, and send the updated file back to Rich. No shipping times involved, no guess work looking at videos. We can send and receive tangible objects across a vast distance with the click of a button (Source: coming up short handed).

Through the course of the project, they have encountered others in need of such a prosthetic set of fingers, as well, including a young boy named Liam who was born with Ambiotic Band Syndrome, leaving him without fingers on his right hand.  On their site, you can watch the videos of Rich and Liam using the prosthetic to grab objects as delicate as a flower or as awkward as a rubber ball.  And, now, with the 3D-printed parts, the boy doesn’t have to lug around a heavy metal hand, but can be outfitted with a light-weight plastic one.  You can see Liam use his new hand in the video below:

More importantly, because the product is open sourced, anyone with access to a 3D printer can download the digits and construct the device for themselves, which is what makes this story different from other news about the use of 3D printing in medicine and prosthetics.  This is a grassroots effort.  We know that a high-priced printer from Stratasys can print parts for an exoskeleton to help a person with arthrogryposis.  But, with a community of knowledge and resources, these two Makers have used a lower-end machine to develop an open source prosthesis, revealing that, even when faced with the large-scale problems in the world, such as the high price of medical supplies, there are solutions.  It’s my belief that, with a strong network of social support, a good deal of elbow grease, and, perhaps, a few 3D printers, more and more people like Ivan and Rich will discover themselves to be Makers and go about Making the world a better place.

If you’re interested in learning more about or donating to the Robohand project, click here and show your support.

[1]Bucky never used the particles “the” or “a” in reference to the universe and he always capitalized it.  According to “How Little I Know (1976)”, his unique definition of the word was this: “by Universe I mean: the aggregate of all humanity’s consciously apprehended and communicated (to self or others) Experiences.”