ModiBot is an intriguing build-a-figurine project from a renowned toy designer Wayne Losey. With more than 13 years of experience from Hasbro and Kenner Products under his belt, the success stories he has played a leading part in include licensed toy household names such as G.I. Joe and Star Wars. However, after witnessing some mainstream commercial failures as well as some quite niche successes with some more ambitious and creative toy lines, Losey eventually moved on to working independently and established his own company, Dynamo Development Labs and its product portfolio.

ModiBot could be viewed as a continuum of Losey’s latter attempts with corporate level companies on more modifiable and diverse figures, but instead of using Legos as the core blocks, Wayne has used his personally designed and modelled parts, which are 3D printed through Shapeways. The reasons for choosing a print-on-demand company instead of a personal desktop 3D printer for the actual manufacturing are rational ones driven largely by the need for customer satisfaction: “A lot of people don’t like the ‘unfinished’ quality of the prints, they feel a bit grainy or fuzzy, because its laser-fused bits of nylon,” Losey explains. 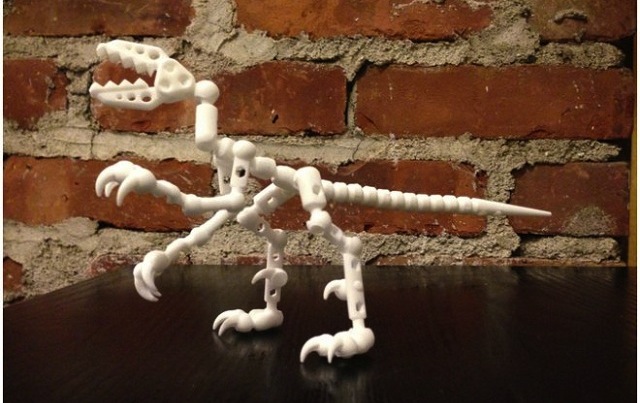 The ModiBot’s fundamental idea is a simple one: on his Shapeways site there are several ready to order base packages for different characters – from an Okinawa Warrior to a ModiRaptor Dino – together with mountains of utilities / detail parts to choose from. The 3D printed pieces can be used to build up a skeleton, which can then be further modified to the user’s taste/requirements. This is an approach that might not be suitable for everyone, but Losey believes there is a clear demand and thus a market for a product such as this: “ModiBots are a creative framework for creating characters, but it’s meant to be built upon like a skeleton. We also want to put the ability to create ‘content’ into a user’s hands. ModiBot is ultimately a tool for that,” he stated.

Watch a video showing one these ModiBot figurines being built – with parts straight from the Shapeways-oven – seasoned with some appropriate 8bit-reminiscant tunes.

Even though building something from individual blocks and pieces might be easily associated with a certain Danish toy giant, the man behind the project sees the more relevant comparison to be in a different direction: “We’re providing a bunch of parts that you can assemble in a variety of different ways (dinosaur, spider, robot, human) or build onto it to bring your own fun characters to life. If we were comparing with Lego, Stikfas [note: Losey’s designed former modifiable toy line] might be more like Bionicle, more about character and aesthetic, while ModiBot would be closer to Technics which is about both play and function. Those differences will be easier to see in the next six months, or so. It takes a bit more time to design tools that let people create for themselves,” Losey commented. 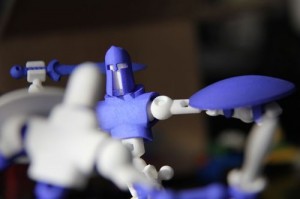 The range of ModiBot parts is quite extensive already – with 700 parts and counting and prices starting from around the $13 mark for a complete figurine part set.

What I would personally like to see in the ModiBot world is for someone to post the results of making some Mask characters, for example. And as dinosaurs are a base option as well, Dino-Riders would also deserve their eternal place in the sun. But even if the golden toy era of the eighties or early nineties doesn’t come back in this form, ModiBot itself is still a very cool project – and one which will surely appeal to its core audience as it gathers momentum.

All images courtesy of Wayne Losey