Because 3D printing started in the industries of engineering, manufacturing and architecture; the software used to generate 3D models is rooted in traditional CAD, which can be difficult to use for many artists and hobbyists.  Luckily, as the technology becomes more mainstream, more user-friendly options for creating printable objects have been released. While Tinkercad has its advantages, I think that a lot of people who already use Adobe products will be grateful to know that the latest edition of Photoshop makes it relatively easy to turn 2D images into 3D models.

Over at DigitalArts, Steve Caplin has put up a great tutorial on how to create a 3D model in Photoshop and then export it easily to turn it into a printable file.  In order to get a better understanding of how the process works, I decided that I should try it myself.  Unfortunately, only the latest edition of Photoshop, CS6 Extended, will allow you to create 3D models, so I had to download the trial version.  Also, I have yet to get my hands on a 3D printer myself (my birthday’s next week, so fingers crossed) and I couldn’t complete the tutorial to the very end, but based off of my design, I think that the how-to is a really great resource.

I decided to try for a 3D model of the 3DPI logo.  The tutorial walks you through the entire process and even includes instructions on how to give your 3D model an inflated appearance so that, while I could have a flat logo like this:

I could also go for something with a bit more character, like this: 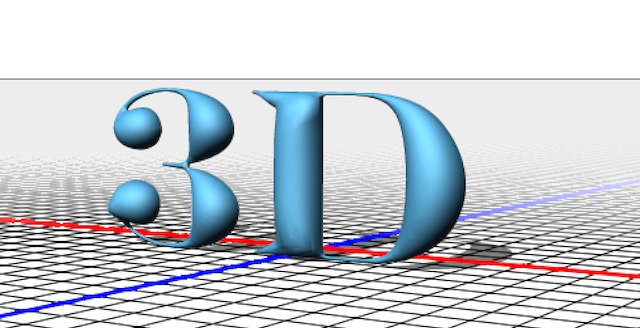 Caplin also explains that some 2D shapes will be more suitable for printing, which means that not only will I probably have trouble printing my balloon logo, but that I’ll probably have to incorporate some sort of support structures in order to print a ‘3’ and a ‘D’ that won’t drip down during the build process.

Exporting the model to an .obj file is extremely easy in Photoshop, but, to make an .stl file requires converting the model in a program like MeshLab.  And you’d still need a slicer to make it readable to a 3D printer.

Though I’m sure many users of 3D printers would disagree, for me, as someone who’s already gotten used to Adobe tools, this is a much more intuitive way to create 3D objects.  I can’t attest to the actual printing of the 3D model I’ve created, but, perhaps one of the more fortunate folks at 3DPI will be able to print it on their own printer and put it up on the site.