There is now a number of wonderful projects orientated around 3D printable prosthetics. There are also, by now, a number of examples of each of the many body parts that 3D printed parts can aid the replacement of. Here, we take an overview of the current 3D printed hand prosthetics.

The potential of home 3D printing to empower the individual to create life-changing solutions that only a decade ago the majority of us would have not anticipated within our lifetime is truly on show here. 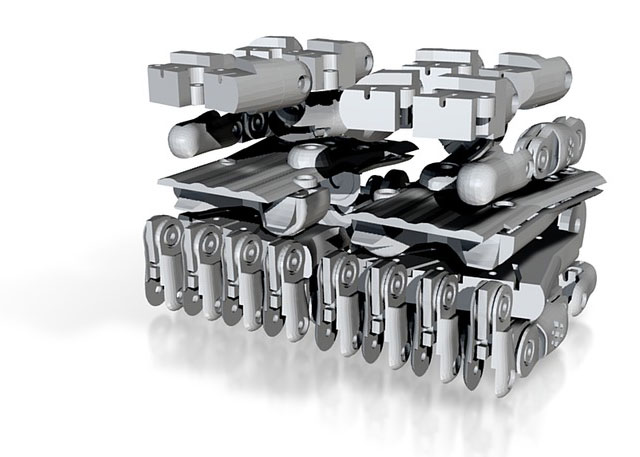 Robohand was established in 2011 when Richard van As had a woodworking accident and lost four fingers on his right hand. He is right handed. During his very short time in the hospital he decided he would create himself a mechanical finger to replace his lost digits. Major prosthetic manufacturers gave him a solution with a price tag of $10,000 a finger.

Richard searched desperately for a DIY project — someone who might have tips on how he could build new fingers himself. Maintaining optimism during a long and weary search he came across and contacted a programmer and automation technician, Ivan Owen of Washington State, USA, who had posted a video of the mechanical hand he had created as part of a costume on YouTube.

The Robohand is now part of the Open Hand Project, the website for which can be found here. The project also includes the Dextrus, a purely mechanical device with no motors or electronics. The Robohand is ideal for a partial hand amputee since they can use wrist movements to open and close the hand mechanically. The Dextrus hand is much better for a full hand amputee, since it gives them the use of a hand, without them needing to use another joint such as their elbow to move it mechanically.

Chris Chappell and Easton LaChappelle (unrelated) created another amazing home-created 3D printed prosthetic hand. Earlier in the year our very own Juho conducted a 3DPI interview with Chris Chappell here, further to covering the inspiring story here. Easton LaChappelle is a self-taught high school sophomore who has already built a number of iterations of a robotic hand, the first of which was showcased at Colorado State’s science fair and received an award.

After the initial attempt was built using Lego, fishing wire and other more mundane materials, for the second version Easton used 3D printed parts along with a telemetric Nintendo Power Glove and some more sophisticated electronic components. This prosthetic achieved a second place trophy at the Intel International Science and Engineering fair.

Now, the team’s company AnthroMod have a range of viable available hands to be 3D-rinted at prime 3D printing service Shapeways as can be found here.

And more recently the Open Hand Robotic Hand Project, headed up by Joel Gibbard in Bristol, has, gratifyingly, achieved its funding goal on indiegogo.This project, slightly different to the others, but equally altruistic in intention feature robotics and on completion will be made completely open source. A video outlining this project can be seen below.

So, rather than $10,000 (or more) for a prosthetic finger, 3D printing has brought about a pair of prosthetic hands being purchasable for as little as USD$496.69. You’ll need the electronic components too, but this is a different class of affordability for this ‘product’ entirely from those that profit-seeking large enterprises produce. Here, the ethical value, as well as the economic worth, of the home maker is greatly highlighted. Pertinent indeed in a time where the world’s most powerful government is still stalemating itself over something as basic and moral as affordable healthcare?

To end on a positive, here is the heart-warning story of the very young lady whose entire upper mobility has been transformed by custom 3D printed prosthetics, although it should be noted these prosthetics were printed on an industrial grade 3D printer: