There’s been a lot of coverage on 3D printed medical applications recently, once of the huge growth areas of the technology. Prosthetics in particular have featured strongly, such as the heartwarming story of young Liam, who got a new lease on functional life with a 3D printed lightweight prosthetic hand and fingers – all open source goodness. Now with the ever quickening  tech adaptation rate of kids, who are exposed to different kinds of technologies practically from infancy, it’s no surprise that there have been instances where minors are making breakthroughs. On 3DPI we are featuring one such inspirational story — and the brains behind it belong to a teenager called Easton LaChappelle who is a self-taught high school sophomore.

Despite his young age Easton has already built two iterations of a robotic hand, the first of which was showcased at Colorado State’s science fair and received an award. After the initial attempt was built using Legos, fishing wire and other more mundane materials, for the second version Easton used 3D printed parts along with a telemetric Nintendo Power Glove and more sophisticated electronic components. This version was also awarded nationally – this time with a 2nd place trophy at the prestigious Intel International Science and Engineering fair. 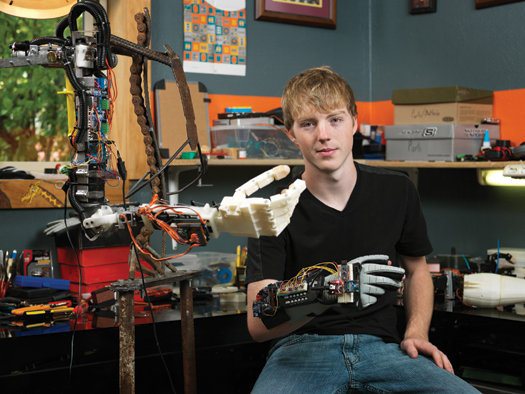 However, subsequent to that fair Easton went home with something even more important than the award and well-deserved recognition , namely the inspiration for the next phase of his ever-evolving project. He had met a girl at the fair with an $80k prosthetic arm – something that would need to be replaced as she grew. An eye-opener, Easton was inspired by this to start working towards a robotic arm, which would have the same level of functionality as the professional commercial applications, but for a fraction of the price.

The third iteration of the robotic arm uses a Teensy microcontroller, amplifier circuits as well as Bluetooth receivers. In practice, the arm is controlled by first flexing specific muscles in the foot, then selecting the intended (pre-set) movement by blinking and finally using an EEG headset to control the actual movement. All the parts excluding gears, motors and screws are 3D printed – with a Printrbot. The result of all this is an operational limb, which doesn’t cost $80,000 but a mere $250 – pretty amazing.

This approach has resulted in a project, which could end up serving many different needy parties – from people who are struggling with the prices of conventional robotic arms to beer companies: in a rather weird twist, Heineken has placed an initial order for 5,000 of these arms to serve beer to the lager-thirsty customers at their bars.

To further raise awareness of his project and to get more funding to continue the iterative process there’s now a pledge campaign regarding the arm on Kickstarter – watch Easton’s preview video showing off his amazing design below.

Even though still in high school, Easton’s future does not look too bleak: besides a uni scholarship he has already been offered a job – including rent – while finishing school. Before that he’ll be spending the summer with Nasa on their Robonaut project. Not bad for a 17 year old.