To usher in the era of 3DP 2.0, Avi Reichental, CEO of 3D Systems, announced the release of an onslaught of new 3D printing systems.  Rachel already covered the new ProJet 5500X Multi-Material and ProJet 4500 Full-color Plastic 3D Printers that were launched ahead of the conference.  Throughout the days that followed, the industrial leader had even more to show the public, including one large SLA machine and an itsy bitsy one for just under $5,000. 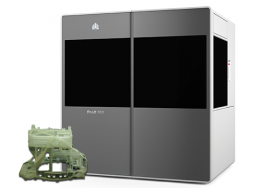 The larger of the two, the ProX 950, can print a part with a width of up to 5 ft or 1.5 m at, according to the company, 10 times the speed of other 3D printers.  3D Systems also boasts that the Prox 950 is greener than its competitors, using the highest amount of material of any additive or subtractive process, meaning less waste from the get go. The press release also has some of the best PR writing I’ve seen to date, saying that the new large format printer can manufacture accurate pars “ranging in sizes smaller than the eye of a needle all the way to parts larger than a life-size tiger without compromising feature details or true-to-CAD accuracy.”

The ProJet 1200, on the other hand, is a micro-SLA printer for $4,900, perhaps meant to rival the Form1, which runs at $3,299.  Meant to “democratize” access to professional grade 3D printers, this new machine has a build volume of about 43 x 27 x 180mm (1.69 x 1.06 x 7.08 inches) and prints 30 micron layers with a resolution of 585 dpi.  The ProJet 1200 can print VisiJet® FTX Green material, a plastic meant for prototyping and casting to use for jewelry manufacturing and small detailed products, such as electronic components.  Here’s a video of the new micromachine below:

The company also announced its ProX 500 SLS 3D printer, for high precision parts within 381 x 330 x 457 mm (15 x 13 x 18 in) in size.  3DS claims that the machine is 7 times faster than other printers and points out that it was developed in conjunction with a new material, DuraForm ProX. DuraForm ProX is 80% reusable for subsequent print jobs is said to have a smooth, quality reminiscent of injection molded parts. 3DS also released two new materials for use with the ProX 500 SLS, VisiJet M5 Black and VisiJet M5-X.  The former, a black polypropylene-like material, is meant for product testing and everyday use and the latter, a white material with “hybrid ABS/polypropylene-like properties”, is for packaging products and piping, among other things.

Also at the event, 3D Systems demonstrated its Geomagic Capture, the industrial-grade 3D scanner previously covered on 3DPI, along with the Geomagic Universal Print Driver, which will allow all ProJet and ProX 3D printers to run on the same printing software. In addition to their new Geomagic tools, 3D Systems brought their rebranded Phenix DDMS 3D metal printer.

All in all, it sounds like it was a pretty exhausting few days for the industry leader. On top of all of the releases, Avi had to run around showing everyone each machine himself: