New Book Asks: How Can 3D Printing Cause Social Change in the Global South?

As low-cost 3D printing begins to evolve, many have suggested its ability to transform the developing world in one way or another.  The conversion of plastic refuse to 3D printable material by companies like ProtoPrint comes to mind, as does the W. Afate 3D printer, a 3D printer developed in Togo and made from discarded electronic components.  One organization at the forefront of this space is techfortrade, a nonprofit that uses emerging technology to shrink the gap between rich and poor in the developing world.  To outline the exact impact that the technology could have on developing nations, the founder and CEO of techfortrade William Hoyle has worked with lecturer and author Thomas Birtchnell to publish a book on the subject, titled 3D Printing for Development in the Global South. 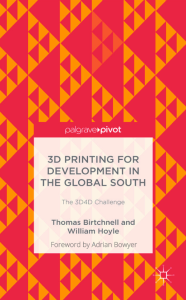 In the book, now available on Amazon in hardback and Kindle form, Hoyle and Birtchnell explore the possibilities for 3D printing to eliminate poverty in developing nations.  Due to the increasing affordability of 3D printing and the potential to rapidly produce solutions for urgent problems and create marketable goods, the technology could give those in the Global South a new tool to fight poverty from the citizenry upwards.  With a combination of interviews and research, Hoyle and Birtchnell ask, “Could 3DP really stimulate grassroots and citizen-led innovation and, ultimately, social change, which complement the Global South’s development goals?”

Hoyle may be one of the best people to author such a book, as techfortrade immediately grasped the potential for 3D printing technology to aid people in the developing world and launched the 3D4D Challenge, which the nonprofit describes in this way, “The Challenge sought to surface innovative 3D printing projects that would foster collaboration around social and economic issues in the developing world.”  The winner of the Challenge was the Washington Open Object Fabricators (WOOF), a group working to convert plastic waste into plastic 3D printing filament.  Since then, the nonprofit went on to create the Ethical Filament Foundation, which is working with ProtoPrint to establish standards and methods for creating sustainable, fair trade 3D printing filament.

You can purchase 3D Printing for Development in the Global South on Amazon right now.  If you’re still unsure about whether or not to purchase it, there’s an excerpt available on Google Books that can help you decide.  I started reading it and I’m already sucked in!