After the wonder and excitement of the London 3D Printshow dissipated, I felt compelled to write about the use of plastic printing materials. This stemmed initially from a conversation with William Hoyle who is the Chief Executive of techfortrade.org; a UK charity focused on connecting developing nations with emerging technology, and the organization that also launched the 3D4D challenge last year.

William was at the 3D Printshow to launch a new initiative for ethical 3D printing filament (plastic) and looking around the show, plastic consumable materials for 3D printing is booming and becoming very are big business. Yet very few providers supply recycled or even locally (raw) manufactured product, most often, even the final processing into filament form is done far away from the end destinations. 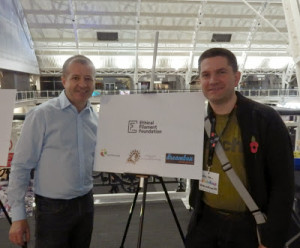 From the early days of RepRap and home 3D printing a question that’s never far away concerns recycling plastic to use at home and most conversations with people new to 3D printing usually result in a discussion about how plastic bottles are not yet being used, but hopefully one day…

These waste plastics tend to focus around drinks bottles being made of PET or HDPE milk containers, which are usually blow-moulded into products but not often used in 3D printers. The reality is that many people have already tried, and some have succeeded to some degree, but the main issue is that plastic materials for 3D printing is actually quite specialized and most of our spare plastic cartons are not ideal for 3D printing, especially after recycling.

One of the most common plastics used in the food packaging industry all around the world is PET (T/E/G). It’s one of the most recycled plastics yet still a lot ends up in developing countries, landfill and on seashores. We have recently seen various forms of PET like Taulman3D’s t-glase and Colorfabb_XT introduced as filaments for 3D printing. Many people believe that PET will play a much bigger part in home 3D printing in the future.

ABS is a very common plastic filament used for 3D printing, the raw material is relatively low cost but still uses a lot of energy, natural gas and petroleum in its creation. ABS is a favorite for the car manufacturing industry, often injection moulded. A very high proportion of most consumer products or toys will have ABS used in the construction. 3D printing of ABS is desired by industry and businesses but is often tricky for home users to get good results with lower cost machines.

PLA was proposed, tested and pioneered during early RepRap developments for use in the 3D printing industry, this material is now very popular with home users for both its green credentials and somewhat friendlier ease-of-use. Much of the global supply of raw PLA material pellets (known as resin) is from a single source, Natureworks, in the USA. The company has patented methods for PLA production from cornstarch using crops grown in the US (which are mostly genetically modified now), so almost anyone that uses PLA for any purpose buys their resin pellets directly from Natureworks, which, as you can imagine, makes a lot of this material and export it all over the world.

Natureworks’ American plant has a capacity of around 136,000 tonnes of material each year, and the firm plans to open a second, similar-sized manufacturing plant in Thailand around 2015 because of the area’s interest in becoming a ‘Green Hub’ for Asia.

Ask any 3D printer operator, and cost v quality is a really big issue. The raw resin pellets for these types of thermoplastic materials cost around $2.50 per kilogram, but with the processing of these pellets along with the colorants and sometimes additives to modify flexibility, which is necessary to produce 3D printing plastic ‘filament’, the cost to the end user can be anything from $20 to $300+ per Kg!

Sourcing directly from Far-East suppliers, 3D printing filament on rolls (where quality can vary greatly) can be obtained for around $7 per Kg. This figure can easily double with the transport and duty costs to get it to the end destination or region. Large 3D printing companies obtain their plastic, ready to print, at even lower costs. We are seeing more local but still industrial processing of plastic resins into filaments, this does help to reduce transport costs (and carbon footprint) but will not usually result in a lower cost product to the consumer. Another advantage of locally processed filament is that it can result in higher quality products when a more local company is putting their name to the product.

We don’t really have an ideal solution for supply of 3D printing plastic because costs, quality, dimensions and performance all vary greatly depending on the supplier and the material. We also have a wide range of delivery methods — most likely supplied either in coils or plastic reels that are often also made from ABS weighing 300 grams or more. It starts to get even more absurd when filament is sold in plastic case carriers that weight almost as much as the material inside, which after use can’t be refilled…

In an attempt to bring some order to various materials, along with suggested settings for home 3D printers and more clearly defined properties, a universal identification and open filament standard is being developed by the 3D printing community over on Google+ here

Many other thermoplastic materials are being processed into 3D printing plastics, even mixed with wood, chalk or mineral fillers to produce specialized filaments. Most recently, another ‘eco friendly’ form of filament made from seaweed has been announced by Le FabShop.

But what about making it yourself? Home recycling systems for filament creation have now existed for some time, the Filabot, Extrusionbot, Filafab and the open source Lyman filament extruder system are just some of the options available. To some degree these systems can produce a filament that could be used in 3D printing, but tolerances vary and the quality of the output is only as good as the material going into the machine. This is often the reason why these suppliers offer to sell virgin ABS or PLA resin chips for these machines so users have a fighting chance of producing a product suitable for home 3D printing. Still, today, not many have ventured into the world of actually recycling waste plastics or even the growing number of failed 3D prints most people gather. 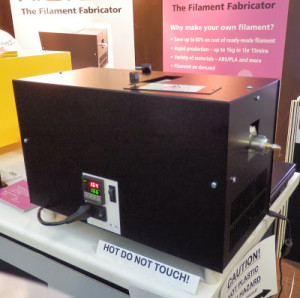 Techfortrade and the Ethical Filament Foundation plan to see if our global mountain of waste plastic could be used for 3D printing. We sadly find that certain areas of the world have masses of waste plastic materials, people are paid very little to sort and clean so recycling can take place.

Consumers are now familiar with the way fair-trade should work, and are often prepared to pay a little more for a fair-trade product. That makes sense with products that can’t easily be produced in your own country like coffee or bananas for example, people want to know and feel the growers, processors, packers and shippers all get a fair deal out of the process, it’s valued on both sides.

While I fully support recycling and also encourage local manufacture of goods, the same is true for filament production. It would be ideal if the waste plastic did not end up being exported out of the UK, Europe and the US to remote places in the world in the first place. Local recycling and reprocessing could be done for plastics anywhere in the world.

Can a quality controlled recycled product be made at a cost that makes both ethical and environmental sense when local processing and transport to the intended destination are also factored in?

Our planet does have a big problem with plastic waste, and also generally a low or negative view of recycled plastic products. It will be very interesting to see how many people are actually prepared to pay a similar amount or more for a recycled 3D printing filament regardless of its origins. If a need can be generated, then we have a fighting chance that further local reprocessing will become more viable than us continuing to ship off plastic waste to somewhere out of sight.

The thing I’m not sure about is if consumers — makers and home 3D printing users — are going to want recycled plastic. Quality is a big issue for most users, apart from the aesthetics and worry about contamination, the technology being used in 3D printing is also not favouring the use of recycling because as the printer nozzles become finer and speeds increase it only gets more important to have a very high quality and consistent material.

Of course the very end customer may like or desire the recycled printed product, if that happens then demand should increase, this could be the case with anything connected to a company, they may feel that bringing more plastic products into the world even for promotional purposes is justified if they are recycled. Art projects, sculpture, even large scale 3D printed constructions are also areas where recycled plastics could be positively adopted.

Fundamental 3D printing technology could also be altered to make plastic recycling easier to self-implement, many people have commented over the years that melting plastic into filament form, only to re-melt it in a 3D printer is a number of steps more complicated than it really needs to be.

Questions need to be addressed about the use of recycled plastics in 3D printing and I can’t think of many better ways to do this than with a fair-trade style organisation. To ensure recycled plastics are both as safe as the virgin material was, and also have a high enough quality for both home and business users, is a big challenge. One where an approved stamp by an authority could lead to positive adoption of using recycled materials in our 3D printers.

Protoprint has already signed up to be the first licensed filament processing organisation based in India, a great overview of what they are already doing is shown in the video below:

For now, William Hoyle and the team are asking for debate and discussion to start around the suitability of recycled plastics for 3D printing. They hope to start finding out the problems and then looking for help with solutions. I for one am on-board to help and encourage anyone interested to join in with the conversation.

Richard Horne, probably best known to many as RichRap, describes himself as “an Engineer at heart with a passion for making things work in the real world.” When he is not working at his day job, Rich spends a great deal of time working with a full range of 3D printers at home — his children quite like them too.