The cost of technological progress is that, with each exponential leap of Moore’s Law, obsolete machinery is cast away as garbage.  And, because discarded electronics often contain harmful components and toxic waste, landfill regulations in first world nations prevent the disposal of such products.  Where then does the e-waste go? According to one Salon article, “millions of used computers, TVs, cellphones and other electronics [are dumped] in the world’s developing regions, including those in China, India, Malaysia, the Philippines, Vietnam, Eastern Europe and Africa.” 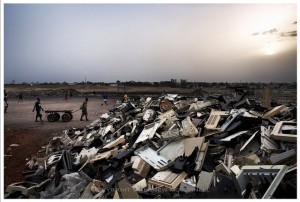 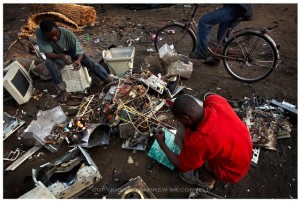 Afate Gnikou of the Togo-based WoeLab, the first hackerspace in West Africa, hopes to do his part to rectify the problem with the W. Afate[1] 3D printer. 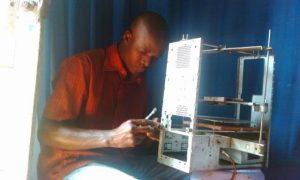 The W. Afate printer takes the spare electronic parts from the massive dumps and recycles them into something useable.  Gnikou uses the scraps from scanners, computers and printers and assembles them into the frame of a Prusa style RepRap printer that can then be hooked up to an Arduino board.

The idea sprang from AchiCamp 2012, a workshop in Togo’s capital of Lomé devoted to architecture and urban design, when a Prusa kit was imported from France. Gnikou then developed a strategy for democratizing the printer by modifying the design to include recycled parts. He is now seeking funding for the project on the European crowdsourcing site ulule.  The proceeds will go towards developing printer kits and open source documentation. 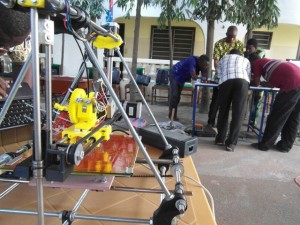 This printer is not Gnikou’s only solution to the e-waste problem facing the planet. As part of a team made up of Sénamé Agbodjinou, Togonese architect & anthropologist; Edem Alomatsi, Togonese biologist; and Julien Déprez, French designer and mechanical engineer, Gnikou has a plan to send the electronic garbage to Mars in the form of a robotic W. Afate 3D Printer.  Utilizing the process of 4D printing, the robotic printer would unfold itself and roll into action on the red planet, where it could build a variety of structures from recycled parts.

The project, aptly titled “W. Afate to Mars”, won the local International Space Apps Challenge in Paris and has made it to the global round of the challenge with judging scheduled to take place tomorrow, May 22nd.  If you think W. Afate should make it to Mars, make sure to vote for the project on Twitter!