Aleph Objects, the company behind the Lulzbot line of 3D printers, is a fan of constantly modifying their machines with new iterations.  From May of last year until May of this year, the company has released four different versions of its TAZ 3D printer, improving things like the rod system, the power supply, and adding a modular printhead to make for easier extruder upgrades when the time is right.  The latest version of the TAZ, the TAZ 4, was sold as an assembled machine for a price tag of about $2200.  Aleph Objects has now come out with a kit form of their most recent machine, for those who enjoy the experience of building their 3D printers at a reduced price. They’re calling it the KITTAZ and it’s almost $600 cheaper!

The KITTAZ is not too different from the TAZ 4, except that the kit doesn’t come with the same frills, like an LCD screen/SD card reader.  The KITTAZ also requires a connection upgrade to ready it for dual extruders.  A comparison of the two products is displayed below. 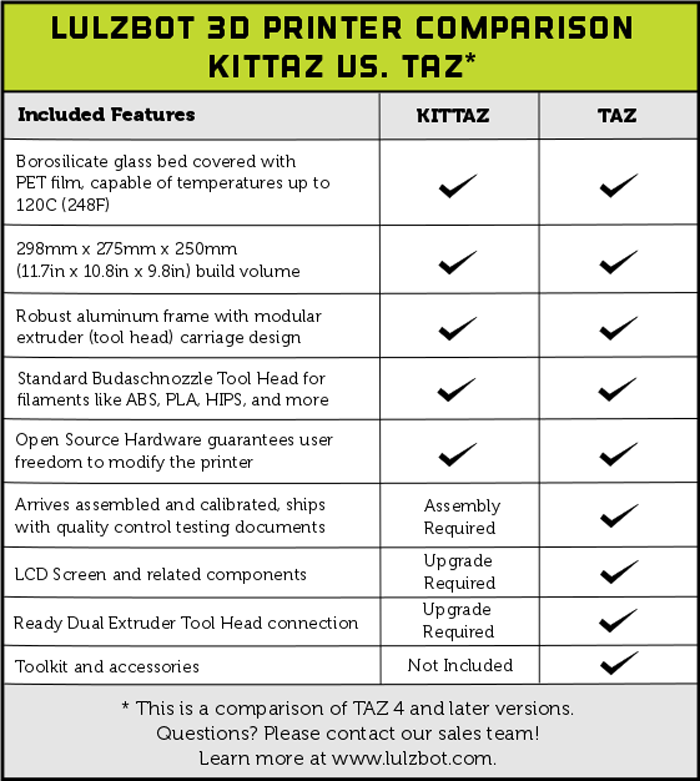 You’ll note that the kit version doesn’t include the tools required for assembling the machine.  In this way, the KITTAZ may be best suited for those who already have the means for constructing 3D printers, like a number of screw drivers and allen wrenches.  The full list of tools can be found at the LulzBot site.  So, if you’re looking for a fun $1600 weekend project, or am upgradeable 3D printer for your hackspace, and you’re already equipped to build these sorts of things, you might consider the KITTAZ.