While I was at Inside 3D Printing Santa Clara, I was introduced to ChemCubed, who had just released their electronics 3D printer, capable of depositing resin and conductive inks out of eight different inkjet heads.  As if the printer itself wasn’t exciting enough, the company had two business partners sharing the booth with them, one of which was InfraTrac, whose CEO, Sharon Flank, was present to discuss the use of 3D printing to create a unique method for protecting IP from counterfeiting.

At the booth, Sharon held an inconspicuous, 3D printed chip that she described as an anti-counterfeiting solution.  Without any embedded electronics, I was unsure as to how it could work, but Flank explained that it uses a “chemical fingerprint” that can be verified simply and at a low-cost.  The chip, when held under a pocket spectrometer, can be authenticated by matching a scanned product’s chemical makeup against an authorized product’s unique identifier, a multi-layered mathematically-coded pattern.

She likens the printing of such an identifier to a peanut butter and jelly sandwich saying that, as an object is being printed, the taggant would be sandwiched between the standard layers of a print.  In this case, the taggant layers represent the PB&J, while the layers surrounding it is the bread.  To create the taggant within the print, all that is necessary is the use of multiple materials, Flank says, “The chemicals in the fingerprint fall generally into two types.  Either they are chosen from among the available materials in the printer’s repertoire, or they are a standard material but with an additive.” She continues, “So, on a Makerbot 2X that prints with ABS and PLA, you could sneak a little PLA into the ABS portion of your object and use it as a taggant (this is the trivial version but still covered by our issued and pending patents). Alternatively, you could, as we’ve done with the ChemCubed acrylics, create a slightly different version, still acrylic, for use as a taggant.”

Then, to authenticate the product, all that is necessary to scan it for its internal ID, is a pocket spectrometer.  The device can be used to capture an object’s material makeup to be matched against a product’s official tag.  Flank explains, “Pocket spectrometers from companies such as JDSU (now Viavi Solutions), Texas Instruments, and Spectral Engines OY (Finland) send a light through a sample and read what the molecules bounce back. They are checking whether the material matches the pre-loaded model (‘Is this tagged?’). They connect to a laptop or smartphone, via USB or Bluetooth. You just hold the spectrometer up to the item you’re testing (and a spectrometer can test for hundreds of different things at once).”  The video below demonstrates how it works, though it involves a more complicated user interface than would be implemented commercially, Sharon tells me.

Gartner predicts that “[t]he global automotive aftermarket parts, toy, IT and consumer product industries will report intellectual property theft worth at least $15 billion in 2016 due to 3D printing.” This patent-pending technology, however,  could potentially benefit IP holders like Disney, who are already exploring the 3D printing market, by allowing them to 3D print these chemical fingerprints into their products to protect against counterfeiting.  Because the process is non-destructive and invisible to the human eye, the chemical identifiers would go unnoticed, until the product is authenticated.  In a future in which 3D printing will be used to counterfeit merch for Disney’s next big princess flick, InfraTrac’s technology might ensure that only the company’s official merchandise carry the value associated with authenticity. 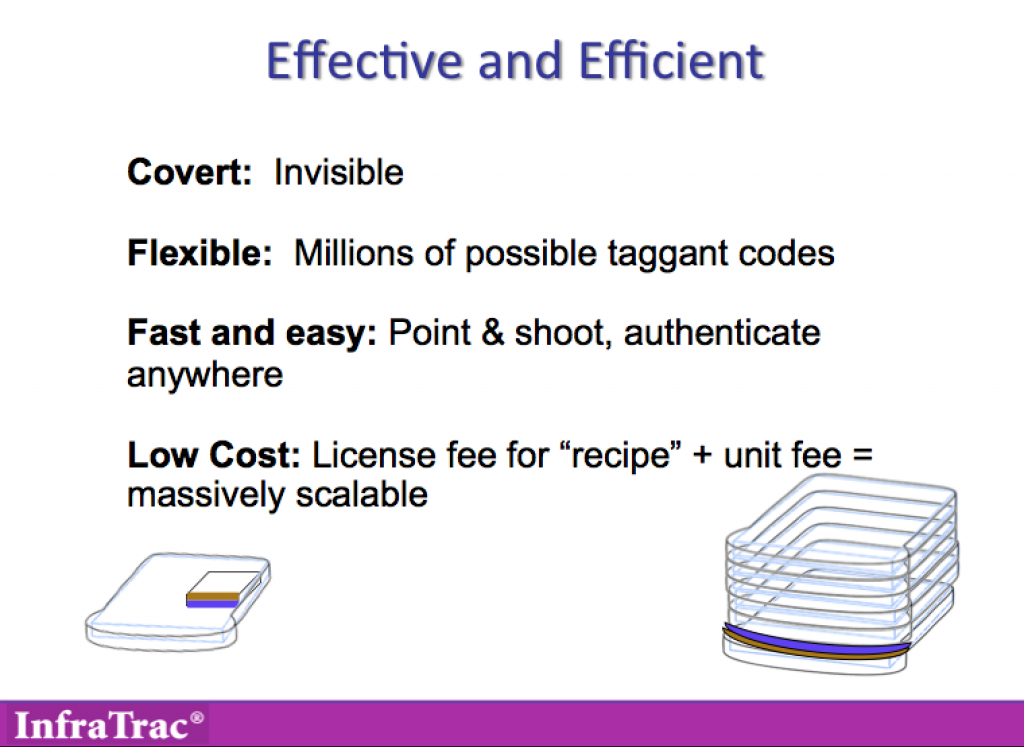 According to Flank, implementing their technology is low-cost, fast, easy, and compatible with most 3D printing materials, like plastics, UV-cured metals, and, even, metals.  And the verification process, she says, is easy, with an hour of training allowing for anyone, such as customs officers or warehouse and loading dock employees, able to authenticate products instantly.  At the same time, the chemical codes themselves aren’t revealed to anyone during the authentication process.  The taggants could even be used to prevent the unauthorized 3D scanning of an object.  If an original 3D printed model is scanned for reproduction, the scanner could feature software that, when it picks up on the invisible taggant, would be prevented from completing the scan.  Or, like a photocopier, the software could generate text that reads “FAKE” across the scan.

Though my generation and those that come after it might not be as concerned with IP theft, given our familiarity with torrents and Napster, there are plenty of huge corporations, institutions, and even small designers that worry about their intellectual property being stolen.  Unlike more complex strategies, involving stream-to-print software or quantom dots, InfraTrac’s process seems relatively straightforward and inexpensive.  If industry picks up on it, I have little doubt that their technology, or a similar offering by another company, won’t be incorporated into the growing market for 3D printed goods.