ChemCubed had exhibited at 3D Print Week New York, but, without a printer present, I had a hard time having a palpable understanding for what they do. As a materials company, they work with businesses to concoct the exact type of material a client needs. Though this may include resins for stiff and flexible applications, ChemCubed also develops resins for optical use and even conductive inks. And, at 3D Print Week California, this was all made very palpable with the ElectroUV3D, an LED flatbed 3D printer designed through a collaboration between Direct Color Systems and ChemCubed. 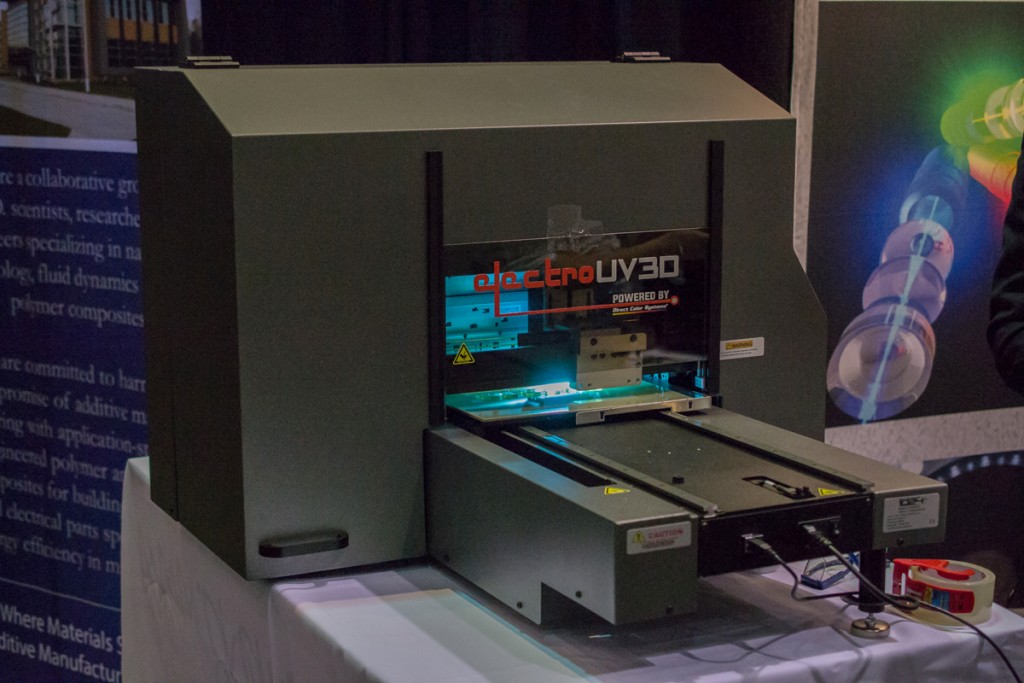 The ElectroUV3D uses UV LED lights to cure resins, deposited out of the system’s eight different channels, layer by layer on the machine’s flatbed.  Additionally, the system is also capable of depositing conductive ink and low temperature sintering. And, because the machine can cure resins with different material properties, it can create objects with flexible and stiff, as well as conductive, properties all in one go. To demonstrate this, the ElectroUV3D was printing out miniature LED flashlights live on the showroom floor. 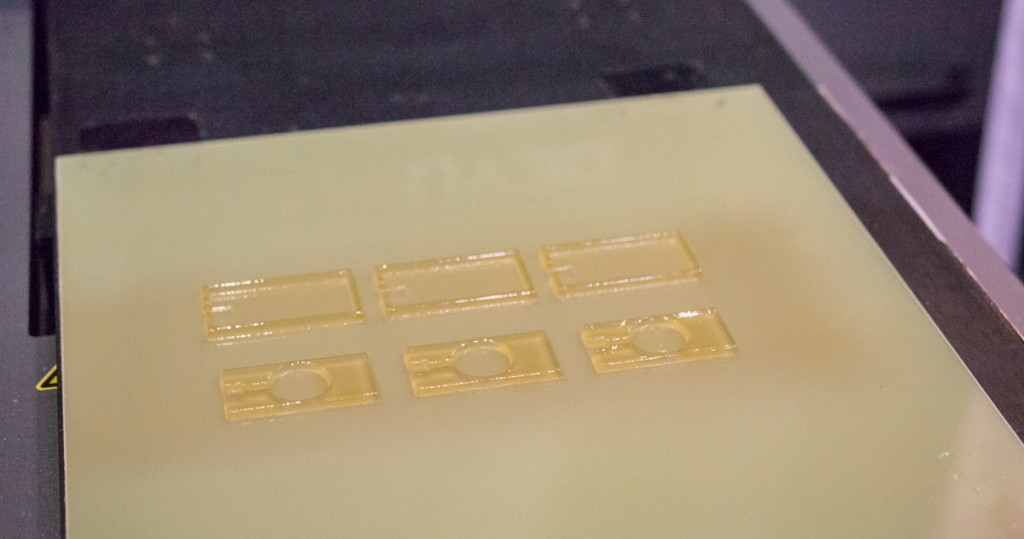 The flashlights were composed of a stiff bottom layer, followed by a layer of conductive ink, in which a small battery was placed along with the LED light, before a final flexible layer was added. Then, when the flexible portion over the battery was pressed, bringing the LED into contact with the battery, the light would shine.

A simple device, but also a great demonstration of all-in-one electronics 3D printing that may even be beyond the capabilities of the current generation of the Voxel8 electronics printer.  The system, which should retail somewhere above $10,000, is intended for industrial users, and is possibly being used as a platform to showcase ChemCubed’s materials expertise. 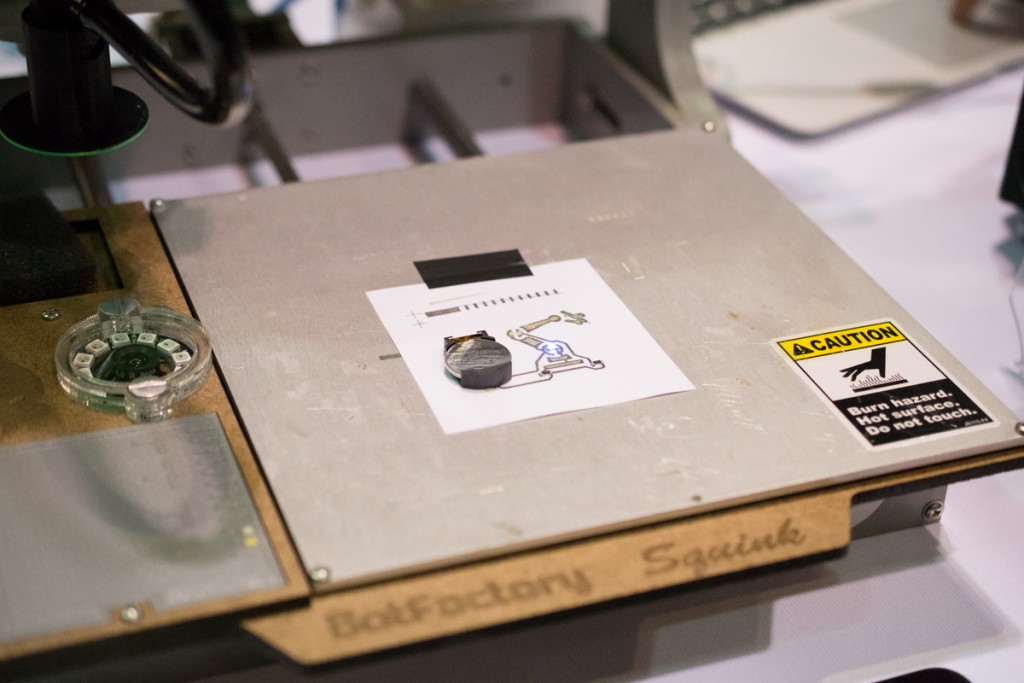 This materials expertise was lent to New York’s BotFactory who use ChemCubed’s conductive ink in the production of custom PCBs. The startup’s impressive Squink device is capable of just about anything you’d need to create a custom PCB, including tracing circuits, picking and placing electronic components, and even applying soldering paste or adhesive.  Also sharing the ChemCubed booth was InfraTrac, who had used the ElectroUV3D to produce an intriguing anti-counterfeit chip that uses UV light to verify the authenticity of a product. Both of these companies deserve separate articles entirely that I’ll be working on for next week. 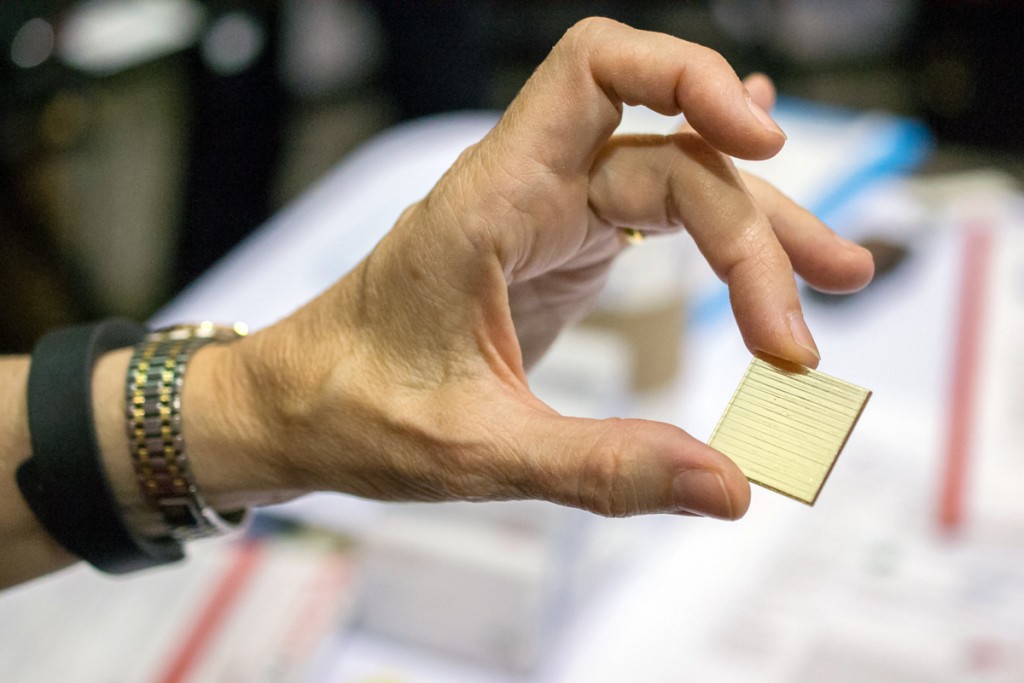 Seeing ChemCube’s display of 3D printed parts was now starting to make sense, with Direct Color Systems’ printing technology as a platform for showcasing the company’s knowledge of materials.  The addition of two startups using that knowledge demonstrated just how ChemCubed might work with just about anyone to develop a material to fit their application, whether they be perfectly transparent optical components or 3D printed RFID chips.  So, while they may have flown under my radar initially, they won’t go unnoticed for long.

All photos by Danielle Matich, though, the video below, from ChemCubed, demonstrates the 3D printing of an RFID chip with the ability to project radio signals up to an impressive 4 meters.