As the 3D printed architecture industry begins incubating, projects are emerging that hope to implement this still nascent technology.  There have been a number of large-scale structures printed piecemeal or as almost complete buildings that take advantage of various 3D printing techniques in the hopes of increasing the efficiency of construction, both in terms of energy and materials, as well as costs.  Among the companies have drawn the most attention from their 3D printed construction projects is WinSun, a Chinese company that made a huge splash when it, first, constructed 10 homes in the course of 24 hours and, then, built an enormous villa and adjacent apartment complex with 3D printing tech, too. Now, the company plans to take its printing plans abroad to the United Arab Emirates, where, today, the UAE National Innovation Committee revealed that WinSun will be manufacturing a one-storey prototype office building in Dubai along with a number of partners. 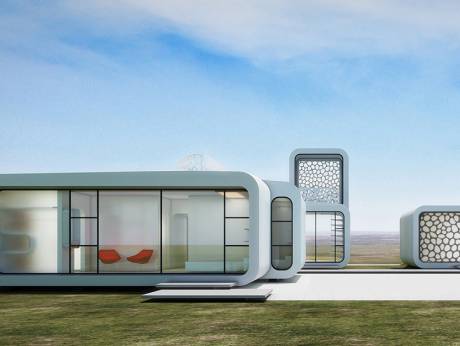 According to Mohamed Al Gergawi, the United Arab Emirates Minister of Cabinet Affairs, the company will 3D print a 2,000 square feet (185 square meters) office building using its 20-foot-tall printer.  The building, which will see the interior and exterior walls, as well as furniture, 3D printed, will be made from Special Reinforced Concrete (SRC), Fiber Reinforced Plastic (FRP), and Glass Fiber Reinforced Gypsum (GRG).  With construction taking a few weeks, the partners involved estimate that labor cost will be cut by 50-80% and construction waste 30-60%. Alongside WinSun, architecture and engineering firms Gensler, Thornton Thomasetti, and Syska Hennessy will also aid in the construction of the project. 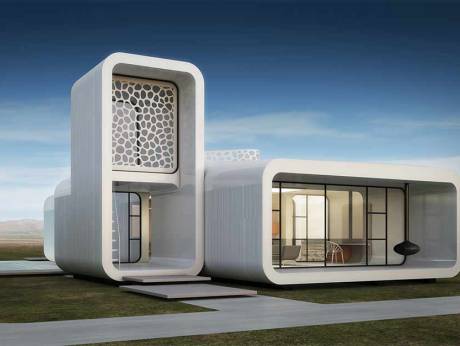 Al Gergawi says, “This project reflects the vision of our leadership here in Dubai. The idea of 3D printing buildings was once a dream, but today it has become a reality. This building will be a testimony to the efficiency and creativity of 3D printing technology, which we believe will play a major role in reshaping construction and design sectors. We aim to take advantage of this growth by becoming a global hub for innovation and 3D printing. This is the first step of many more to come.” 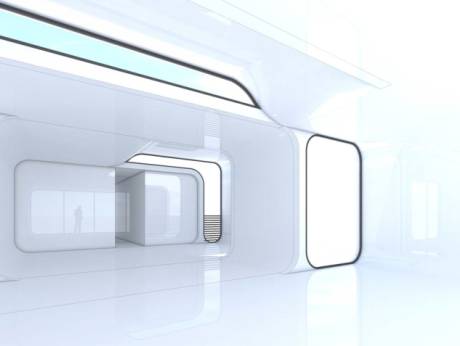 WinSun’s process has been controversial for a couple of reasons. First, as the company does ever show its printer printing, some wonder as to the construction process, with assumptions being made that the company prints the individual components off site before assembling them on site.  Additionally, it’s been alleged that the company lifted plans for its technology directly from USC professor Behrokh Khoshnevis.

Khoshnevis told The WorldPost that the CEO of WinSun, Ma Yihe, went to the professor at an LA workshop acting as a materials supplier for Khoshnevis’ own work, before taking the knowledge and heading back to his company in China. Khoshnevis told The WorldPost, “WinSun basically copied my patents, infringed on my patents… He showed me materials and asked me to show him the consistency and all that. I showed him a lot of things thinking he was going to supply material.”

It should also be noted that the UAE has been accused of a number of human rights violations.  While this project may reduce labor costs, the treatment of the labor that will participate in the project may not be treated humanely.  Human Rights Watch says of the country’s labor practices, which are only a small component of the country’s larger human rights violations:

According to 2011 government statistics, foreigners account for more than 88.5 percent of UAE residents, many of them low-paid migrant workers from South Asia. Despite years of criticism, the UAE has not addressed shortcomings in its legal and regulatory framework that facilitate the exploitation and forced labor of these workers.

Recruiting agencies often charge workers fees of several thousand dollars and employers customarily confiscate the workers’ passports for the duration of their stay in the UAE. The authorities have taken no steps to stop either of these illegal practices. Nor have they taken steps to reform the kafala (sponsorship) system that ties a migrant worker’s legal residence to his or her employer, or ‘sponsor.’ Migrant workers have no right to organize or bargain collectively, and face penalties for going on strike. In May, hundreds of workers at a site in Dubai went on strike demanding better pay and conditions. After the two-day strike, immigration officials issued at least 40 deportation orders.

UAE labor law excludes domestic workers,almost exclusively migrant women,denying them basic protections such as limits to hours of work and a weekly day off. A flawed 2012 draft law for domestic workers has yet to be adopted and a regional unified contract for domestic workers, expected to be approved in 2014, falls well short of the minimum standards outlined in the Domestic Workers Convention that the ILO adopted in 2011.

Therefore, as exciting as the project may be, in terms of 3D printing technology, there are a number of issues to consider in relation to Duabi’s future 3D printed office building, to open in March, 2017.  Whatever may be achieved architecturally should necessarily be overshadowed by the country’s human rights records and praise withheld until those issues are addressed.  At the same time, as an American biased when writing about all aspects about the industry, it could be said that before any similar project is pursued in the United States, we should address our own human rights violations, which include the highest rate of imprisonment in the world.  China’s human rights issues should also not be overlooked.  I guess, then, if I were to spend too much time thinking about the human rights of the countries we write about, we might not end up writing about technology at all.