3D Printing the Skeleton of a Live Animal

The use of 3D printing for medical applications has had a wide impact on the sector and is constantly pushing boundaries. One area of interest is in the combination of CT scanning with 3D printing to scan a live being and transform it into a 3D printed object — a skeleton in fact.

The skeleton image below was created by taking a CT scan of an anesthetized rat and converting the resulting data to produce a 3D print. Applying this technique enables the creation of life-size models of body parts, for example from other animals or human patients that is useful for veterinary and medical student training purposes, as well as more directly to aid surgeons prepare for specifically difficult surgeries. We have also seen this technique used in the name of art — 3DPI has previously reported on the work of Caspar Berger, who produced a self-portrait skeleton using similar techniques.

The individual behind this project for producing 3D prints from CT scans, however, is Evan Doney, an engineering student. Evan works in the lab of Matthew Leevy, who runs the biological imaging facility at the University of Notre Dame. Leevy didn’t instantly see the scope of possible applications, but after having a conversation with an ear, nose and throat surgeon, he began to see the possibilities of 3D printing technology for the medical sciences. 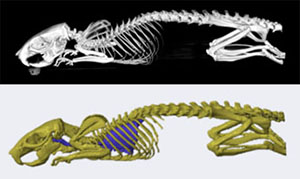 In order to create 3D printer readable files Doney used several freeware design programs to convert the CT scan files. To put words into action, the team 3D printed a simple rat skeleton (white), and another with a removable set of lungs (green-purple). To complete the work the team had access to a number of 3D printers including a Makerbot and ProJet HD 3000. These models and a video how-to guide were published in the Journal of Visualized Experiments.

Going beyond animal scanning, 3D models from CT scans could potentially help surgeons prepare better for difficult operations, such as removing tumors from hard to access areas. The education application also seems lucrative; currently human skulls costs hundreds of dollars and the full skeleton ten times more. 3D printing would only cost a fraction of that price. The students would also be able to buy their own and study at home.