Artist and sculptor Caspar Berger is renowned for his self-portraits. For his latest project —Skeleton — Berger has used the very latest advanced technology to reveal a portrait of the invisible — his own skeleton. Berger had his body scanned in one of the world’s most cutting-edge CT scanners, which produced very accurate 3D data of his living skeleton. This data could then be made compatible for use with a 3D printer to build a precise replica of parts of his skeleton.  From these 3D printed parts Berger went on to make silicone moulds of the bones and then cast copies in bronze and gold. 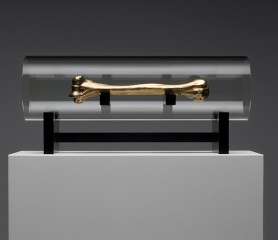 These two sculptures are the prelude to a larger project. Under the title Skeleton Berger will cast all of his bones in different materials and incorporate them in a series of artworks, in each of which he will approach the phenomenon of the skeleton in art history from a different direction. He will present his bones as sculptural objects, based on the concept of a collection. He will also explore the phenomenon of relic veneration, presenting parts of his skeleton as contemporary relics. Finally he will develop an artwork that makes a connection between two crucial elements of human identity: the skin, which when we are alive bears our unique identity in a fingerprint, and the bones from which we can be identified after our death. According to Berger: “Our bones go on to reveal who we were long after we are gone. With a scan, 3D prints and casts of my entire skeleton, I aim to make the invisible tangible in three dimensions, and thus hold in my hands the symbol of what remains after death.”

An abridged but fascinating version of the process can be viewed in the video.

Sculptor Caspar Berger (b. 1965) studied at the AKI, Enschede and at the Jan van Eyck Academy in Maastricht, the Netherlands. He draws much of his inspiration from the Italian High Renaissance and transforms its language to the present day. In his work Berger investigates the relationship between the interior and exterior, between reality and image. Berger gives shape to his ideas using silicone casts of models and of his own skin or even what’s underneath, leading to its end result in bronze, silver and sometimes gold. 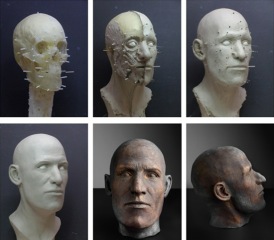 Skeleton has been made with the support of: