NASA’s Space Launch System (SLS)* Program was brought into effect towards the end of last year with the aim of supporting space exploration. The project is focused on developing a heavy-lift rocket — managed by the Marshall Space Flight Center in Huntsville, AL — that “will take humans, equipment and experiments beyond low Earth orbit to nearby asteroids and eventually to Mars.” According to Ken Cooper, advanced manufacturing team lead at the Marshall Center.

One of the advanced processes that has been adopted by engineers at the Marshall Centre is Laser Cusing — a metal additive manufacturing process — from Concept Laser, a division of Hoffman Innovation Group of Lichtenfels, Germany. An M2 Cusing system — effectively a large, sophisticated metal 3D printer — is being used by the team to develop a material properties database for various alloys and, ultimately, will produce complex metal components for the RS-25 and J-2X rocket engines. 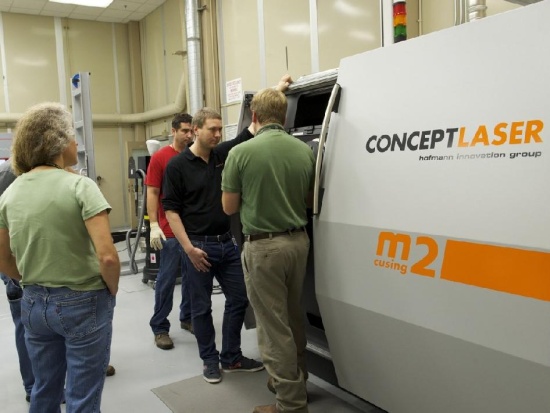 Ken Cooper explains, “Basically, this machine takes metal powder and uses a high-energy laser to melt it in a designed pattern. The laser will layer the melted dust to fuse whatever part we need from the ground up, creating intricate designs. The process produces parts with complex geometries and precise mechanical properties from a three-dimensional computer-aided design.”

It is believed that the Laser Cusing process will benefit the agency by saving millions in manufacturing costs compared with traditional manufacturing techniques as well as bringing inherent safety advantages.

“This process significantly reduces the manufacturing time required to produce parts from months to weeks or even days in some cases,” commented Andy Hardin, the integration hardware lead for the Engines Office in SLS. “It’s a significant improvement in affordability, saving both time and money. Also, since we’re not welding parts together, the parts are structurally stronger and more reliable, which creates an overall safer vehicle.”

Below is a video of the M2 Cusing machine in action:

* From the Editor: A few of you, like me, may appreciate the irony of this acronym appearing in a news story about a metal additive manufacturing system/process that is NOT selective laser sintering!