3D printing stocks have been exploding lately with worldwide interest in the technology.  Beginning with 3D Systems and Stratasys, a number of companies have held IPOs to take advantage of this interest, with the most recent being voxeljet and i.materialise hinting at possible plans to go public. And, as we see more and more companies looking for public investment, it’s a good idea to approach 3D printing stocks with a healthy amount of skepticism.  A case in point is a relatively unknown company called Makism, which announced on November 7th that it had filed with the SEC. 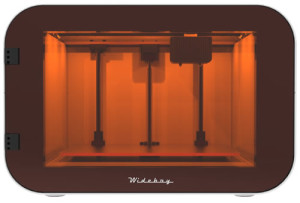 The announcement that it would be traded on the OTCBB under the symbol MDDD came with news that Makism had acquired UK firm Umicron Ltd. Both companies are very obscure, but Makism has a website (launched November 7th, according to Gary Anderson), at least, which describes the company’s flagship product, the Makism Wideboy. The Wideboy has yet to go into production, but the company boasts that it will be a plug-and-play machine, with a streamlined design, dual heads, and the ability to “print with exotic materials such as nylon, polycarbonate and a range of support materials.”  Doesn’t get much more exotic than nylon, eh?

Because I’m not a stock analyst, I thought I’d cite what the prospects of the company are as cited by other stock blogs.  Aim High Profits points out that the current management team of Makism is the former management team of Umicron, saying, “from December 6, 2012 (inception) through August 31, 2013, Umicron Ltd. did not generate any revenues.”  The blog also explains that, in a previous life, Makism was an unsuccessful shell company called Advanced Cellular.  Another finance blog, nanalyze (which I can only assume is stock analysis for nanas) believes the stock to be pretty risky:

When looking at the potential of a company, investors expect to see an experienced senior management team that can execute on the company’s vision. Makism currently has three employees; the CEO, the CFO, and the Secretary. 26 year old Luke Ruffell is the CEO and Chairman of the Board of Directors of Makism. Previously Mr. Ruffell was a director of Geoh Networks Ltd. and a director of Taper UK Ltd, neither of which appear in a cursory Google search. 26 year old CFO Mathew Lummis studied Business and Management while attending the University Campus Suffolk and for the past four years worked as the Facilities and Landscape Manager for Forest Camping Ltd., a campsite in the UK. 21 year old secretary Feroz Khan was previously the director of Bespoke 3D Ltd., a prototyping company, since June 29, 2013, and a director of AAKhan & Sons Ltd., a property company, since May 1, 2010.

Investors who are considering Makism as an investment option should ask themselves what they are purchasing when they buy shares of this company. Based on the recent 8-K filing, it appears investors would be buying an ambitious business plan, an inexperienced management team, and around $16 thousand dollars in cash, all of which command a current valuation of around $85 million dollars.

Even Gary Anderson seems skeptical, and he tells everyone to buy 3D printing stocks all of the time.  All-in-all, the company doesn’t quite seem to have anything substantial to offer, which doesn’t make it all that different from a 3D printer being launched on Kickstarter.  At least, on Kickstarter, campaigners have a video demonstrating some sort of prototype.

In my high school consumer education class, we had to break into groups of three, develop a stock portfolio and pretend to buy some stocks, which we would watch over the course of a few weeks. My friend Marty and I never took the class seriously, so it was unfortunate for our third team member, Yves, that he was paired with us. Unlike Marty and me, Yves loved the opportunity to simulate a stock portfolio. He was going to be out of town when we made the actual “purchases”, so he told us to buy Cisco Systems. When he came back the next week, he was disappointed to find that we had bought Sysco, which dealt in food distribution, certainly not the exciting world of electronics he’d hoped for.

News of MDDD stock makes me wonder if the company hopes to be confused with another, more popular 3D printing company that hopes to take advantage of some naive investors that are easily confused by company names and ticker symbols.