In the case that I 3D-printed a soundwave, it would either be Joy Division’s iconic cover for the album Unknown Pleasures or the character Soundwave from Transformers, but I guess you could go the presidential route, too. That’s what artist Gilles Azzaro did and the result is actually pretty cool.

The piece, titled “Next Industrial Revolution” is a 3D-printed visualization of Barak Obama’s State of the Union Address announcing the “new industrial revolution” through the formation of additive manufacturing hubs across the United States. Shown for the first time at the 3D Print Show in London on November 7, 2013, the installation encases Obama’s 3D-printed waveform in a glass tube and under a green laser scanner. Triggered by motion or with the push of a button, an audio recording of the speech is played while the laser marks exactly where along the sculpture the sound is represented.  Watch the piece in action below, followed by a transcript of the President’s words, in case you’d like to follow along.

A once-shuttered warehouse is now a state-of-the art lab where new workers are mastering the 3D printing that has the potential to revolutionize the way we make almost everything.

There’s no reason this can’t happen in other towns.

So tonight, I’m announcing the launch of three more of these manufacturing hubs, where businesses will partner with the Departments of Defense and Energy to turn regions left behind by globalization into global centers of high-tech jobs.

And I ask this Congress to help create a network of fifteen of these hubs and guarantee that the next revolution in manufacturing is Made in America. We can get that done. 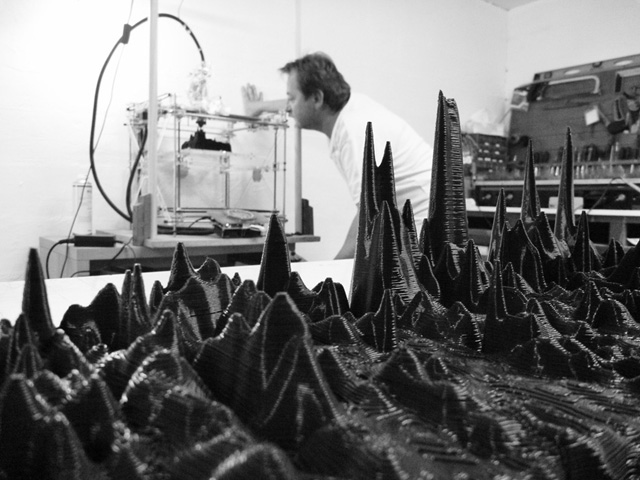 As Rachel discovered while at the show, it’s a large sculpture — a labour of love. The entire 3D printed waveform is about 151 cm long, 16.1 cm wide and 15 cm tall. It weighs about 6 kg, having utilized that weight of PLA material from a total of 10 kg, and was entirely printed on Azzaro’s desktop 3D printer — 350 hours in total — over an eight-month period. The glass case that houses the print, beautiful in itself, was designed by Patrick Sarran. This is neither the first nor last audio file the audiophile has made or will make into a piece of artwork. Additionally, Azzaro has created QR-embedded paintings of quotes from Neil Armstrong, Mahatma Gandhi, and JFK.  He’s also produced a series of love-inspired jewels from the phrase “I love you.”