The Young and the RepRaps: the iRapid 3D Printer and RepRap.com

Not too long ago, I wrote about the Isis One, a RepRap 3D printer that, when released, suspiciously resembled a Mendel Max 2.0, but wasn’t accompanied by its design specs and didn’t pay tribute to its Mendel Max predecessor.  What ensued was a bit of techie drama worthy of its own prime time reality show that ended with the Isis One folks apologizing and making good to the community. It seems that this wasn’t the first time a new RepRap developer stepped on the toes of fellow ‘Rappers.  When the website for the German iRapid 3D printer launched in January of 2012, it wasn’t located at its current domain of iRapid.de; it was situated at RepRap.com.

What you’ll gather from the iRapid website is that the current iRapid platform is a sleek, black, fused filament fabricator with a 250 mm x 150 mm x 120 mm build volume, a resolution of .05 mm, computerless printing, a rack and pinion system, and a magnetically attached printbed (as opposed to those paper clips seen on other desktop FFF printers).  What you might not pick up, if you’re a consumer that’s not too familiar with grassroots 3D printing, is that the iRapid is a RepRap derivative and that, when it first launched, it tried to use the RepRap name all for itself. 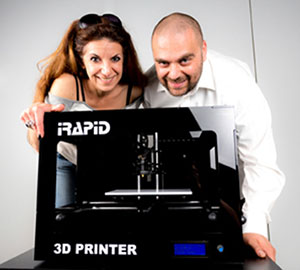 After releasing the device, the engineer behind the iRapid, Hakan Okka, announced its existence and its domain name, RepRap.com, on the RepRap forums.  As you can imagine, the response was not positive.  The most vocal critic was RichRap, who began countering the new printer with the following:

@OKKA – So you do realise that by obtaining the domain reprap.com and launching this printer you are kicking us all in the balls?

HARD ! – Or do you just not care? – Just in-case you do not see what you are doing – You are making it look like you are ‘Reprap’ In-fact to some people out there this .com will look more official than the real reprap.org – you are trying to get one over on all the other suppliers (even closed source ones) that do support the real reprap.org project and products that use its good name – You are using very under-hand tactics and will not get you any supporters on this Forum.

If you launched this product NOT using the reprap.com name and domain then most people would wish you good luck and remind you it’s a good idea to go open-source and be part of the real reprap mission especially if you are promoting it on this forum. But you have NOT done that.

I was going to give you some positive comments about the Rack and Pinion system, but No, I don’t feel inclined to start a discussion now…

RepRaps are meant to be self-replicating machines, partially due to the open-source nature of their designs.  By publishing the design files for a RepRap printer, one gives the community the opportunity to modify and build the 3D printer so that it develops and reproduces along the lines of an evolving organism.  It is not specifically frowned upon to try to profit off of RepRap derivatives; in fact, many RepRappers sell their machines as kits and fully-assembled units (hence, Makerbot et al).  A lack of openness and a refusal to acknowledge one’s predecessors, however, is quite the no-no.

Hosting a RepRap derivative at reprap.com is like selling books at a bookstore called The Public Library and the RepRap community was not having it.  User kludgineer even sought to take a small amount of revenge, saying:

The irony is your printer has a good name, irapid, and 2 seconds worth of thought would have told you that iRapid3d.com would have been a perfect name… Unfortunately you didn’t stop to think so now that name belongs to me and will soon be pointing at reprap.ORG. Of course, I would be happy to give you that domain, all you have to do is donate the reprap.com domain to Adrian.

But the members of the RepRap forum soon found that Okka had gone even further, as user kludgineer was soon to elucidate:

Interestingly, as Joaz just pointed out in the IRC channel, not only is the use of the RepRap.com domain deceitful, it is 100% in violation of the RepRap license terms. Per the terms of the license (http://reprap.org/wiki/RepRapGPLLicence), the name RepRap can be freely used, but it CANNOT be trademarked. Well, look what Joaz found:

A downright attempt to trademark the RepRap name, to the RepRap community, might be seen as the ultimate crime.

Soon, it was clear to Okka that he had made enemies with the wrong people and he, in turn, deleted all of his previous comments in the forum thread. He, then, apologized on behalf of iRapid and even wrote to Adrian Bowyer about what he considered more of an innocent faux pas than anything else:

The trademark are not able to register… this is true.

The Domain reprap.com will be shut down in the next hours. If Adrian want the Domain, he can contact me.

I also have register the domain irapid.de I think this is better than reprap.com…

…I spoke with Adrian,

he is really a gentleman, no crying… we spoke rational about this…

If you take a look at the post history of the iRapid designer, it seems that, though he made some attempts to become a productive member of the community after the incident, there may still be some bad blood between him and some of the other members.  But that doesn’t seem to have prevented his success.  iRapid was featured at the opening for the largest 3D printer store in the world, iMakr, as well as in the German press, and it seems to have come a long way since its original design, aesthetically at least.

In my post about the Isis One, I joked around about “evil simulacra in our midst”, which, if you don’t know me, might sound a bit harsh.  For anyone who’s read Philip K. Dick, though, you know that the line between authenticity and falsehood is very blurry and always shifting.  And even the greatest protagonists may discover that they are androids in the end.  On the one hand, this is cause for paranoia of the worst possible kind (Could you be a robot??).  On the other, there’s always a chance for redemption; a simulacrum can, like an electric butterfly in a synthetic cocoon, transform itself into the real deal.

Perhaps, in the case of iRapid and the Isis One, this is the case.  Or, more realistically speaking, maybe these engineers are just people, too.  Like all of us, they make mistakes.  If they learn from their mistakes, choose good design over marketability and decency over profit, they may be forgiven and their success relished instead of relinquished by the web 2.0 world.