Isis One 3D Printer and The Real RepRaps of Chicago

As we delve deeper into the 3D printing trend and more startups make their way into the marketplace, it’s difficult to determine which startups contribute to the advancement of 3D printing technology and which are merely jumping on the bandwagon, which startups are authentic and which are simulacra. And, because we live in the web 2.0 era, it’s very easy for consumers to have a say about what new products are on the market and there are plenty of venues for them to express their opinions.  This is something exemplified with the release of the Isis One 3D printer. 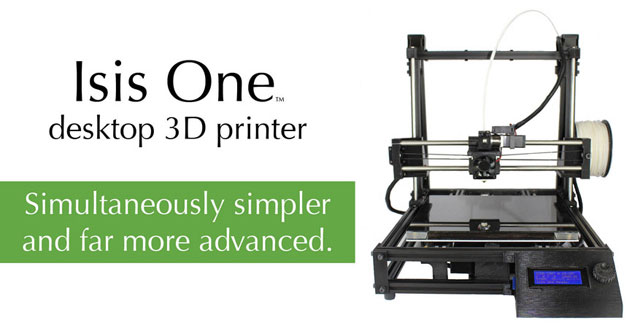 The Isis One is a pretty RepRap with a big build volume of 12 x 12 x 9 inches.  It boasts some nice features, claiming that, when printing with PLA, there’s no need for painter’s tape or ketone tape.  You just spray a little hairspray on the glass plate, and your print is easy to remove.  It’s also got an LCD screen for SD card, computer-less printing.  And the Isis 3D site promotes that the printer has great resolution, reliability and repeatability, so that when you pay $2,199 for a fully-assembled, pre-calibrated Isis One, you’re buying a plug-and-play machine that needs no tweaking out of the box. But slick marketing has become the tell-tale sign of an evil simulacrum in our midst.

When the Chicago-based Isis 3D team announced its product release in the MendelMax forums, there was a lot of backlash, including claims that the Isis One design was a rip off of the MendelMax 2.0 RepRap printer from MendelMax designer, Mike Payson. Because, initially, Isis hadn’t introduced the printer to the RepRap forums, one group member described their reaction this way, “Like I said earlier, I don’t care that the Isis printer exists, but it would be like Ford announcing a new car re-design on a Chevy owners forum, and not announcing it to Car & Driver, Edmunds, or anywhere else.  It’s just in bad taste and seems underhanded.” And the project was, in the beginning, released under an open source non-commercial license, meaning that others could build their own versions of the printer, as long as they didn’t try to sell them.

Watching The Real RepRaps of Chicago drama unfold was some juicy, popcorn-eating fun.  And, in the end, Isis 3D went through a Voight-Kampff test with the RepRap community acting as Rick Deckard, trying to determine if Isis was human. After the flak received from the community, Isis has done their best to make things clear and right by posting the differences between the Isis One and the MendelMax 2.0 on the forums, explaining their research process to the RepRap community, and appropriately attributing their sources. Isis 3D left the MendelMax Google group with this, “We again apologize for announcing our new machine here, and for not sharing the research that lead up to it in real time. Frankly, we were afraid of getting exactly the reception we finally received. We’ll be launching a blog this week, which will share much more about all we’ve learned. This community has given us so much over the past year, and we’d like to be able to give back some of what we’ve learned without being booed off stage.”

The response from Isis 3D may have passed the test; at least in the eyes of Duncan:

As someone who doesn’t have much of a dog in this fight (still rocking a grandpa Mendemax v1 and not gonna change until I go to a resin printer) I’ve avoided tossing my two cents into this thread, but no I’ll just give a quick opinion.

I think it’s easy for the internet to see a “company” pop out with a nice website and a product and to assume they are a company with a big C, which puts them in the world of corporate greed and slimy business tactics, when in fact that company is just a few people like any of us who have decided to push out a product to see how it goes.

It is pretty obvious that the Isis folks made a gaff in posting to the Mendelmax forum and that their launch strategy, or at least that part of it, was poorly thought out. Hopefully they learn from the tongue lashing and move forward and continue to make things, and to strive to make their printer better and to contribute to the community, as they did in the last post about their rod system.  What would be a shame is if their whole fledgling company is submarined because supporters of Mike and the Mendelmax, who are entirely justified in their ire, push back enough to give Isis no chance to make things right.  I think it’s important to remember that it is more likely that the Isis rollout was the rookie business mistake of a maker rather than the malicious calculated exploitation of a big company trying to make quick bucks on open source.

Guess I’m not saying too much new here so I’ll close it out.  Isis folks, its clear despite some of the pushback that you did a good deal of work on your printer and rollout, I hope you keep working and push through this rough patch. I hate to see people vilified for something that may have been a mere honest mistake, but the internet pitchforks are long and sharp and sometimes over reach.  As for the Mendelmax community, I think you did exactly what was required and just in defending the mendelmax and its origins.  It’s  tough to hold back when someone seems to have “ripped off” an idea or person that you respect like Mike and the mendelmax. Though I would hope that we at least leave the door open for Isis to make amends, and not discourage them so severely that they simply hang up their toolbelt and decide that making things isn’t for them.

But anyone who’s read Do Androids of Electric Sheep? or seen Blade Runner knows that all may not be as it appears.  As fragile humans who have been duped by simulacra one too many times, we can only examine Isis 3D closely as it develops, vigilantly watching for signs of falsehood and silently praying that we’ll all be okay.