Spiderbot is a French 3D printer from Qualup SAS’ Myriam and Philippe Boichut.

And just to note right away for those wondering – the Spiderbot Delta is not related to its namesake – MIT student Ben Peters’ Spiderbot 3D printer project – which we reported on in December of last year.

This Spiderbot, from the old continent, has its foundation in reprap-tech and uses plastic extrusion with 1.75mm PLA or ABS, however it does come with other functional aspects that are quite unconventional – it uses something called Delta Technology, which originally dates back to 1985, but its currently off-patent and in the public domain. Basically, Delta Tech is composed of three axis carriages moving simultaneously – complementing one another. The outcome of this is a very stable system due to less moving mass – only the extruder head is mobile – instead of both it and the heater bed – but it’s also a quick one as well: the movement of the Z axis is “almost 50 times more rapid” i.e. greater than 20,000mm/min according to the manufacturer. 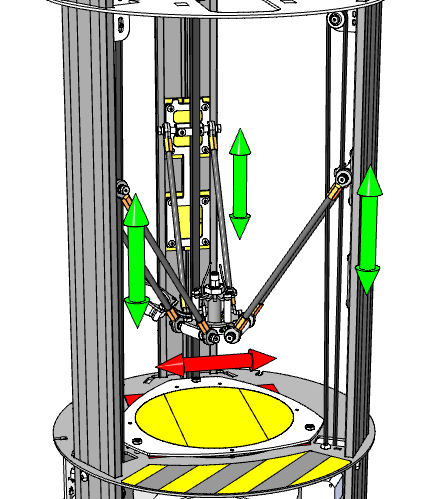 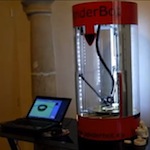 The extra speed does come in handy, as the Spiderbot does have a frame that can not easily be called modest or timid in any way – it stands 80cm (31 inches) tall, has a diameter of 40.5cm (16 inches) and weighs in at 15kg (33lbs). The sheer size of the machine can be seen in the screenshot on the right. The actual printing sizes are reasonably good as well – with maximum dimensions of 180mm x 180mm ( 7.1 inches x 7.1 inches) you can’t  quite print yourself a basketball, but is should prove sufficient for most users.

You can watch the Spiderbot in action in the short clip below.

Software-wise the Spiderbot is delivered with KISSlicer and Repetier Host with prices for the kits starting from 795€ ($1033) for a mechanical upgrade kit, all the way up to the full kit which goes out for 1095€ ($1423) – these do not include shipping costs. At time of writing, they still have 10 Spiderbots left in stock, so if Spiderbot seems like an ideal approach considering your own needs, hit the source link. And if you decide to do so, note that the project is still in its development stage – the site is under construction, but the basic functions do work.