The staff of Israeli Channel 10 television have performed the increasingly obligatory media scare story by smuggling a 3D printed gun into the Knesset building in Jerusalem… getting within a few meters of Israeli Prime Minister Benjamin Netanyahu.

Akin to recent media stories in other States, including the UK where journos (!) from the national newspaper The Daily Mail smuggled a 3D printed gun past the England to France channel tunnel defences; journalist  ‘researchers’ first demonstrated security breaches by entering the offices of the chairwoman of the Knesset Interior Committee, Miri Regev.

On a second occasion, the pistol was brought into the Knesset by a reporter attending an event at which Prime Minister Netanyahu was participating. He passed through guards, CCTV, hidden guards, an inspection with a magnetometer, getting as far as approaching the PM, all without the concealed gun being noticed. Osef Grif, Knesset Security Officer, said in response to Israel’s Channel 10 that “this is a new phenomenon that confronts all the security systems in Israel and abroad with an entirely new type of challenge. In the Knesset, as in all the government ministries and public institutions, the subject is now being examined in order to provide a solution as soon as possible.” 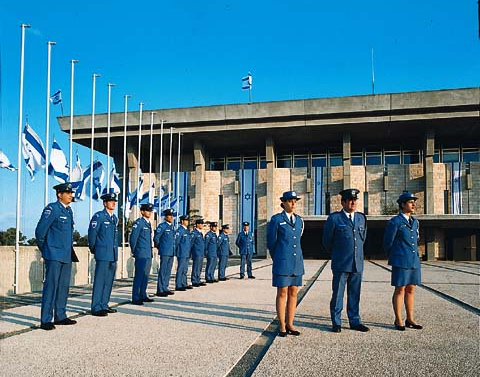 It was also reported that: “the Knesset security officer is in constant contact with the other security organisations in Israel in order to reach a quick and optimal solution to the new threat that has been created.” The Prime Minister’s Office replied: “The method of operation described in the report is known and familiar to the security system. In addition to the inspection system there are a number of overt and covert circles of security. This is an irresponsible act that could have endangered those carrying out the dubious ‘journalistic assignment’ and caused them serious harm.”

Some weeks back, the author of this article notified various international bodies and US Democrat Senator Yee, who had stated a wish to commission research on regulating 3D Printers in response to the 3DP gun phenomena, with a solution proposed by ThruVision. The ever conscientious and conscience led Editor of 3D Printing Industry was straight on the ball with this solution also, see Rachel’s article at the time.

I have yet to hear back from any major institution or politician, but I don’t doubt there is plenty going on behind the scenes.

Cody WIlson of Defence Distributed, now infamous as inventor of the first 3DP gun, however, did respond…

Further developments will be charted at 3DPI as ever.