London hosted its first Mini Maker Faire this weekend past. The Elephant & Castle Mini Maker Faire was the UK capital’s first event with the specific Maker Faire moniker and saw some of the UK’s most prolific makers and vociferous supporters on site at the venue (London College for Communication).

Faberdashery, the UK manufacturer of 3D printing filament and ancillaries was definitely excited to be there. The company’s founders Clare Cunningham and Andrew Dent were on hand to chat about 3D printing and answer questions from the many attendees. 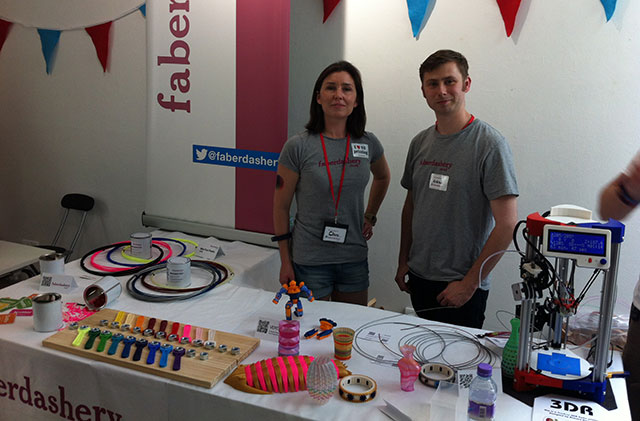 Commenting on the day, Clare told me: “It was a really wonderful event with a whole area dedicated to 3D printing. It is clear that now 3D printing is a key part of the maker movement and Faberdashery is proud to be part of this. It was great to have an opportunity to meet our customers face to face. We’re always inspired by talking to people about what they are doing with their filament!”

They also assembled a ‘Dream Team’ of UK-based 3D printing maker heroes who shared the Faberdashery stand and exhibited some of their work using the filament.

These included Richard Horne, AKA the legendary RichRap who was 3D printing on site with his newest machine — the 3DR and demonstrating multi-coloured printing at its most awesome; and Barney Mason, creator of the mighty Vertex, a 3D printed robot and a massive Thingiverse hit.

Richard’s take on the day was naturally effusive, and you just know he was in his element the whole time. He told me: “It was awesome! No other event can quite capture the magic, fun and strangeness of a Maker-Faire. We were all busy, non-stop, all day long; we did not have a single break in visitors, they must have had thousands of people, many stayed for the whole day, and we were in the very busy 3D printing section, which had a constant stream of people, sometimes four deep waiting to get to the stands to meet, talk and share their ideas. But for me, the real highlight was seeing so many kids with their parents getting involved in the activities, asking questions and talking about making the future, it was a wonderful day and left me wanting to do it all again, very soon.”

Faberdashery had created two limited edition fun packs for the faire, which seemed to go down very well according to the team and were talking about the new developments in terms of more functional materials.

Other maker favourites that took part in the faire included Sugru, Makie Labs and Raspberry Pi. There was also an impressive line-up of speakers that