The 3D printables marketplace is getting a wee bit crowded, as start-ups take advantage of global interest in 3D printing by pushing their own version of 3D model libraries onto the net and asserting that they are, in fact, better than the rest, in one way or another.  If you’re a 3D designer who publishes on sites like thingiverse, it’s possible that you may have been recently approached by Pinshape. 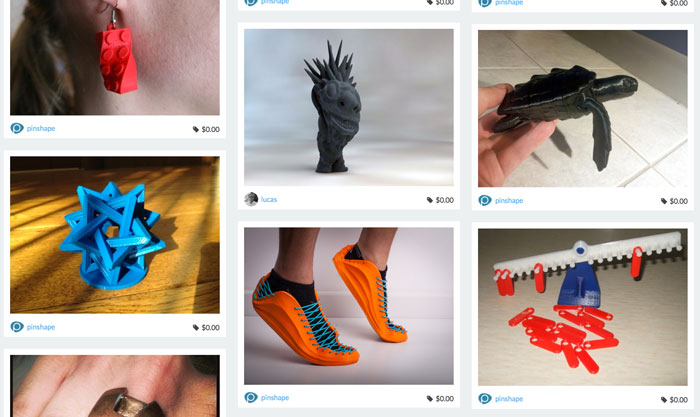 Pinshape is a 3D model repository that, for the moment, is curating 3D file designs to ensure that the objects on Pinshape are unique and nice to look at. Currently in beta, the site has the feel of Pinterest, laying out a dozen nifty designs per scroll with in-browser 3D rendering software, Clara.io. And, because the designers on Pinshape are hand-picked through an application process, most of the objects look like the clever sorts of things you might actually want to print, including: flexible shoes made from Recreus Filaflex filament, twisted Lego earrings and a motorized marble machine.

The site allows its designers to choose their own pricing. Utilizing a soon-to-be-implemented file streaming site, like FabSecure or Authentise, designers will have the option of charging per print, so that 3D files aren’t stored on a customer’s computer. Or, if you don’t want to bother with that, you can allow others to download your files at a fee or free of charge. By the end of the month, it will also be possible for customers to order prints through Sculpteo, expanding the materials options to the over 20 different types. Additionally, Pinshape suggests that their royalty rates for selling your designs are some of the best in the industry, “97% on print markup, 85% on download markup.” 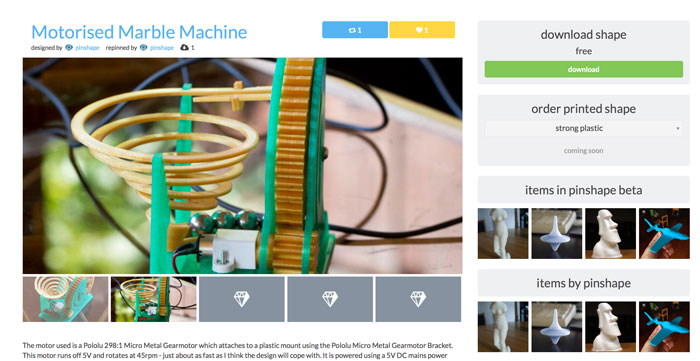 Though I’m not quite convinced that the site is too different from other model repositories, it’s possible that, as they develop, they will stand out from the crowd a bit more. The company plans to integrate a community print hub, which may or may not be like the makexyz distributed printer network offered by maker6. They also explain that they will expand their partnership with printing bureaus and will offer designer marketing tools. Never one to discount a person, place, or thing before it evolves a bit, Pinshape may shape up to be something substantial. Let’s just hope that the Pinterest lawyers don’t get to them first.