The Big, the Small and the Beast of 3D Printers Take Over NYC

Almost like one of those monster movies, or perhaps a Sergio Leone spaghetti western, a few new 3D printers squared off at New York City’s first 3D PrintShow last week. Among them were the largest FFF printer, the smallest (and most affordably priced) and the ruggedest (along with a new Creatr XL from established 3D printer manufacturer Leapfrog). 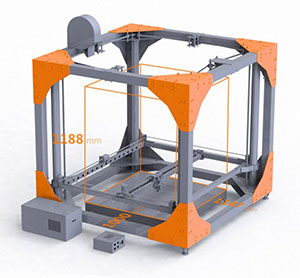 The most noticeable, due to its size, was BigRep ONE by Big Rep — the Godzilla of FFF. With an unprecedented working volume of 1147 x 1000 x 1188 mm (1.3 cubic meters), and a $39,000 price tag, it is meant as a tool for professionals and creators seeking a cost effective system, able to produce full scale build volume objects. The price, in fact, is much lower than any other industrial 3D printer with a comparable size build volume but that does not necessarily mean sacrificing resolution, with maximum performance of 100 micron (up to 1 mm at higher speeds). All most common filament materials are supported, including Nylon and TPE, along with Laywood and Laybrick. That means that if you are looking to build a highly intricate wood-like piece of furniture – or a brick like component for your home – you will be able to do so, once it hits the market later this year — in April or May.

Do not think of carrying it around: though lighter than most industrial 3D printers, the BigRep One weighs a hefty 200 Kg. One last thing to consider is that for $39,000 you do not just get a 3D printer but also a CNC milling machine.

BigRep ONE Timeplapse from BigRep Fullscale 3D Printer on Vimeo. 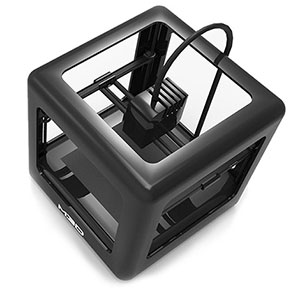 One 3D printer that is sure to capture the attention of many in the months to come is the Micro3D Printer from M3D. This “Small” one comes in on the exact opposite side of the FFF 3D printing spectrum: it is one of the smallest machines ever built, weighing in at less than 1 Kg, and it is going to be by far (if the Kickstarter campaign promises are fulfilled) the most affordable one, with a price tag of just $299 and an added $100 discount for the first Kickstarter supporters (the campaign is due to launch in March 2014), which will take it as low as $199. Such a price would definitely widen the target market and open the doors to more consumer 3D printing, especially considering that the Micro 3D actually looks nice too, it is available in five different colours (much like an iPod) and would look great on any desk – even if you are not using it!.

With build dimensions of 109 x 113 x 116 mm, about one thousandth those of the BigRep One, it can achieve a layer accuracy of 50-350 microns. Its technology includes a Micro Motion Sensor for intelligent positioning feedback for added precision and an “Aerospace Grade Ceramic Heater System” for rapid heating. Its black carbon fibre rods make it sturdier and lighter but also more aesthetically appealing, as does the filament compartment below the pop up print bed. Will M3D be able to deliver on all this? Kickstarter will tell. 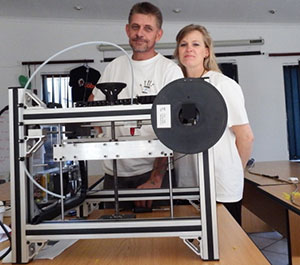 Another 3D printer that emerged last week is one that clearly does not care about looks as much as it does about efficiency — this is Robobeast, the ruggedest FFF 3D printer. Its creator describes himself an a “South African with an idea.” Indeed 3DPI readers will likely recognise the name — Richard van As is also the founder of the Robohand project that aims to help make affordable and functional prosthetic hands in Africa’s war torn communities and poor areas. Richard and his wife Beth, with help from the open source community and particularly the House4Hack group, developed the machine’s prototype in just two and a half months, spurred on by the goal of building a solar powered 3D printer that could operate in remote areas without the use of a computer. What the machine can already do (along with printing Robohand models directly from an SD card), and what it owes its beastly name to, is the ability to withstand a severe pounding during prints, and even print at a 45° degree angle. Much like many other innovators in the final user 3D printer scenario, Richard van As has a vision and a passion guiding him. Full scale use of 3D printing is still a few years away but if this type of passion continues, then we are going to continue to see a lot more amazing ideas popping up at future 3D Printshows and the growing number of 3D printing events around the world.