Here’s an exclusive we’ve been working on for a while and it could just change the face of 3D printing as we know it. This is quite possibly the birth of 3D manufacturing, it is the launch of the Orange Maker concept, exclusively for you on 3dprintingindustry.com. The whole project was announced a while back in 2014, but now the patent is granted, paving the way for the real thing to happen.

Until now 3D printing has largely been restricted to prototypes, the technology simply hasn’t been there to support mass production to an acceptable level with the traditional layer-by-layer printing process. It either takes too long or the results simply aren’t good enough. 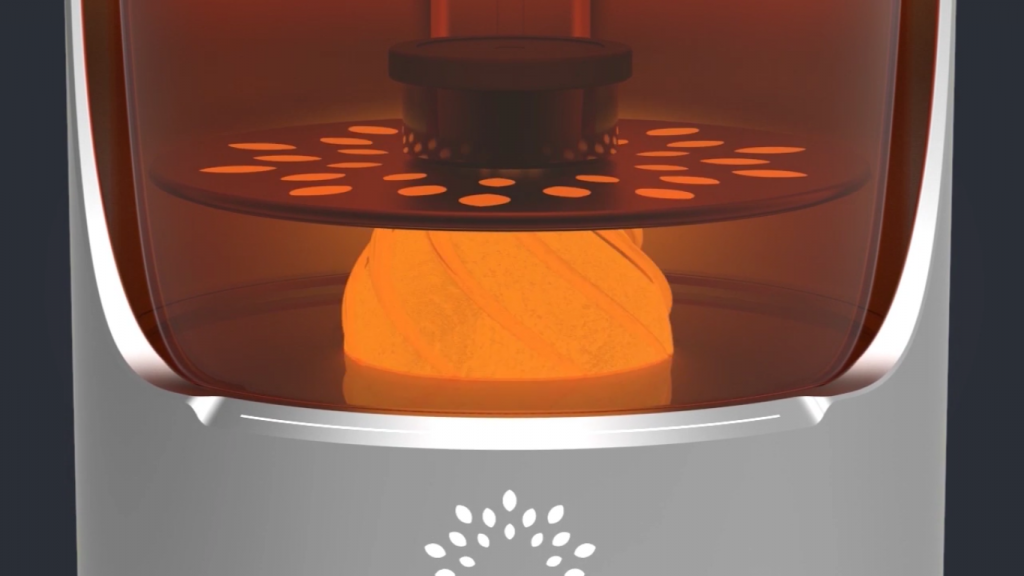 Now a eclectic collection of youngsters claims to have solved the riddle that has haunted the industry for years with a totally new approach. You can only disrupt if you are prepared to change direction and 30-year-old Lead Inventor Kurt Dudley, 21-year-old Chris Marion and 28-year-old Doug Farber have done just that, taking inspiration from the natural world to totally reinvent 3D printing – theoretically at least.

The pair have bet the farm on a spiral method of printing that they claim is fast and reliable enough to jump the great divide between an awesome rapid prototyping tool and a genuine replacement for current mass production techniques. This really could be a factory tool that could replace whole production lines.

Orange Maker is holding a patent

A patent is now in place for this Heliolithography™ process that owes more than a little to the production of DNA and the patent even covers bioprinting, as well as more traditional metallic and polymer production. This method continuously solidifies the product, employing high resolution light across the centre of the helix while the material is laid down in a spiral formation.

The patent covering the unique Orange Maker™ 3D printer and the Heliothography™ process for forming 3D objects using a rotational spiral build was granted by the USPTO and issued as US Patent 9,321,215 on April 26, 2016. Orange Maker Intellectual Property Attorney, Dr. Michael Ram, as well as the team at Koppel, Patrick, Heybl & Philpott, was instrumental in obtaining broad coverage for the Heliolithography™ system and process.

There’s a clear advantage over the traditional 3D printers that are inspired by old-school printers and it’s the efficiency that could mark this one apart as a real game changer. The patented process claims to increase efficiency for print speeds and throughput, to minimize and remove adhesive forces allowing for larger cross-sections of material to be printed, to work with an unique light delivery systems, to allow continuous printing and greater viscosity materials to be used. Finally the Heliolithography™ system can take advantage of the wide range of light sources available and will benefit from the emerging light source technologies and curing techniques that can achieve even higher resolution, faster print speeds and superior product quality. This will allow printing to be more powerful and more economical in the future as photonics technologies continue to advance.

The group behind it was so convinced that they took the unorthodox step of leaving their California home for a Philadelphia base. This project would seem tailor-made for Silicon Valley, but the group has the support of Drexel University and a number of other suppliers that are slowly turning a dream into a reality.

It’s incredible that a shadowy inventor, a college dropout whose biggest success so far was a pyrotechnics display on Youtube and a music industry refugee with a business degree from Drexel could change the world when so many others have failed. Especially when you consider the team outside of the university comprises 15 people dotted around the country.

But it’s the elegance of the idea, the strength of the concept, that makes us think this one might just do it.

Drexel hooked the pair up with a range of experts ready to help, including makerspace NextFab, a variety of professors with experience in the field, and the Science Center. They have all played the part in getting this machine tantalisingly close to full production. Doug and his team are also setting up an east coast base and making partnership and relationships in the north-east region. The company will continue to have a California presence as it continues to build the team and commercialize the machine.

We can only hope now

Will it work? Will it take 3D printing to the next level and create a true mass manufacturing system? We’re not 100% sure, we all need to see this in action. But we are truly hopeful this system will go on to prove itself. There is real innovation here and there’s a sense of excitement that simply ditching the old model and seeing 3D printing in true three-dimensional space has changed the landscape.

Heliolithography could just be the answer we’ve been waiting for. If it is, everything changes and the Orange Maker will change the world.

So let’s all cross our fingers and wait for the next installment from this unlikely collection of 3D printing heroes in the making.