What is the Helios One 3D Printer?

An interesting new company called Orange Maker has emerged out of Thousand Oaks, California and they’ve brought with them a 3D printer that they boast will solve “all current 3D Printing technological issues”.  Their machine, the Helios 1, is the first printer in their series that will deal with problems of “poor reliability, slow printing speeds, inadequate build volumes, poor surface finishes, and low resolution”, while still keeping costs at a low level.  Those are some pretty bold claims! How does the company plan to do it? By creating a new category of 3D printing.

Orange Maker was originally founded by inventor and 3D artist, Kurt Dudley, and tech entrepreneur, Doug Farber, in 2011.  Building their technology and their team over the past three years, the company has developed a patent-pending technology they call “Heliolithography”, a photopolymer-based method for projecting UV light at liquid resin through a “ground-breaking curing process”. It may sound like other light-based 3D printing techniques, like stereolithography, which directs a laser beam at UV-curable resin, and digital light projection, which uses a projector to do the same, but Orange Maker insists that the “Helios One™ achieves a new pinnacle of resolution and quality, greatly exceeding the output of high resolution Stereolithography (SL).” 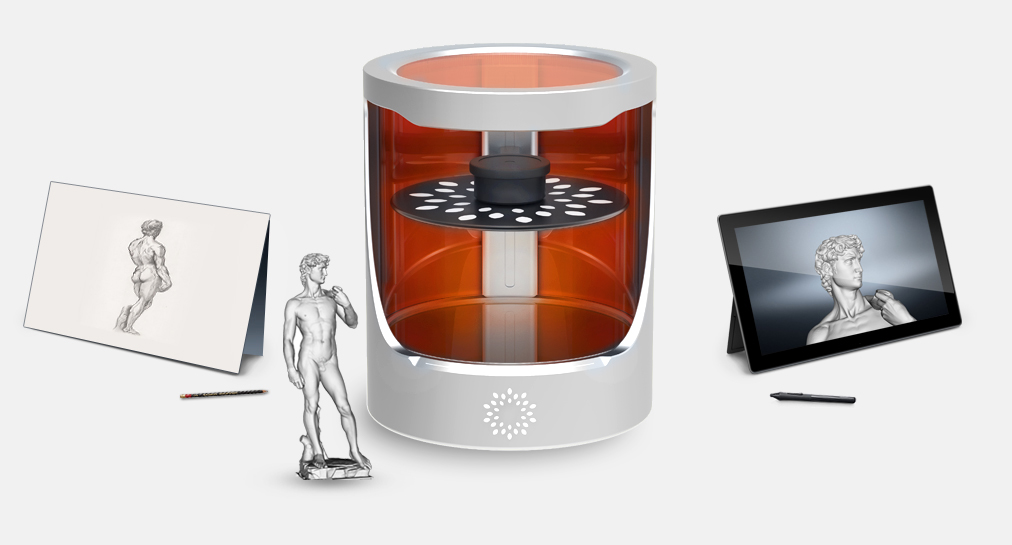 The announcement is an impressive one, but we’ll have to wait to hear more from the company, including specs about the Helios One and more details about how the heliolithography process works.  We’ve been burned by other 3D printer manufacturers in the past, when it comes to groundbreaking news.  BotObjects for instance teased the public for some time about its multicolor FDM 3D printer and, even after several videos displaying the color-melting extruder printing objects.  Needless to say, I’m approaching this story with cautious optimism.

I am optimistic, though! As a sucker for names that may hint at an underlying logic and significance in the Universe, the prefix “helio” holds a special place in my heart.  Associated with Helios, the Greek god of the Sun, there’s an implication of an organic “reaching upwards” when used as a prefix.  For instance, in English, the name for the heliotrope plant means “to turn towards the Sun.” So, with that in mind, let’s all hope that the Helios One has the ability to direct us all ever upwards!  Because, if it doesn’t, we’ll all be sorely disappointed and have to return to our endless search for meaning.